The Mahabodhi Vihar (महाबोधि विहार) (Literally: "Great Awakening Temple"), a UNESCO World Heritage Site, is a Buddhist temple in Bodh Gaya, marking the location where the Buddha is said to have attained enlightenment.[1] Bodh Gaya (located in Gaya district) is located about 96 km (60 mi) from Patna, Bihar state, India.

Images of the site include Avalokiteśvara (Padmapani, Khasarpana), Vajrapani, Tara, Marichi, Yamantaka, Jambhala and Vajravārāhī.[2] Images of Vishnu, Shiva, Surya and other Vedic deities are also associated with the site.[2]

The site contains a descendant of the Bodhi Tree under which Buddha gained enlightenment. 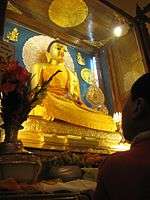 A Buddhist devotee offering prayers to the Buddha at the temple

Traditional accounts say that, around 589 BCE, Siddhartha Gautama, a young prince who saw the suffering of the world and wanted to end it, reached the forested banks of the Phalgu river, near the city of Gaya, India. There he sat in meditation under a peepul tree (Ficus religiosa or Sacred Fig) which later became known as the Bodhi tree. According to Buddhist scriptures, after three days and three nights, Siddharta attained enlightenment and the answers that he had sought. In that location, Mahabodhi Temple was built by Emperor Ashoka in around 260 BCE.[3]

The Buddha then spent the succeeding seven weeks at seven different spots in the vicinity meditating and considering his experience. Several specific places at the current Mahabodhi Temple relate to the traditions surrounding these seven weeks:[3] 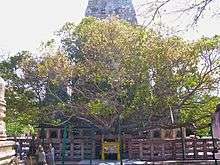 The Bodhi tree at Bodhgaya is directly connected to the life of the historical Buddha, Siddhartha Gautama, who attained enlightenment or perfect insight when he was meditating under it. The temple was built directly to the east of the Bodhi tree which is supposed to be a direct descendant of the original Bodhi Tree.[3]

According to the Jatakas, the navel of the earth lies at this spot,[5] and no other place can support the weight of the Buddha's attainment.[6] Another Buddhist tradition claims that when the world is destroyed at the end of a kalpa, the Bodhimanda is the last spot to disappear, and will be the first to appear when the world emerges into existence again. Tradition also claims that a lotus will bloom there, and if a Buddha is born during that the new kalpa, the lotus flowers in accordance with the number of Buddhas expected to arise.[7] According to legend, in the case of Gautama Buddha, a Bodhi tree sprang up on the day he was born.[8]

A statue of Mucalinda protecting the Buddha in Mucalinda Lake, Mahabodhi Temple

It is said that four weeks after the Buddha began meditating under the Bodhi Tree, the heavens darkened for seven days, and a prodigious rain descended. However, the mighty king of serpents, Mucalinda, came from beneath the earth and protected with his hood the one who is the source of all protection. When the great storm had cleared, the serpent king assumed his human form, bowed before the Buddha, and returned in joy to his palace.

The subject of Buddha meditating under the protection of Mucalinda is very common in Lao Buddhist art. One modern rendition is present in Bunleua Sulilat's sculpture park Sala Keoku.

Pilgrims lighting candles on the north side of the Mahabodhi temple.

In approximately 250 BCE, about 200 years after the Buddha attained Enlightenment, Buddhist Emperor Asoka visited Bodh Gaya in order to establish a monastery and shrine on the holy site.[3] The new Mahabodhi temple included a diamond throne (called the Vajrasana) to mark the exact spot of the Buddha's enlightenment. While Asoka is considered the Mahabodhi temple's founder, the current structure dates from the 5th–6th century.[3] The previous pyramidal temple probably replaced an open pavilion that had been constructed around the tree and the Asokan platform. Representations of this early temple arc found at Sanchi, on the toraṇas of Stūpa I, dating from around 25 BCE, and on a relief carving from the stupa railing at Bhārhut (Fig.20), from the early Shunga period (c. 185-c. 73 BCE).[9] 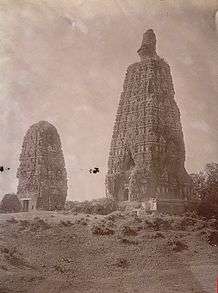 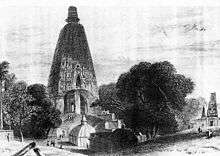 The temple as it appeared in the 1780s

Buddhism declined when the dynasties patronizing it declined, following White Hun and the early Arab Islamic invasions such as that of Muhammad bin Qasim. A strong revival occurred under the Pala Empire in the northeast of the subcontinent (where the temple is situated). Mahayana Buddhism flourished under the Palas between the 8th and the 12th century. However, after the defeat of the Palas by the Hindu Sena dynasty, Buddhism's position again began to erode and became nearly extinct in India. During the 12th century CE, Bodh Gaya and the nearby regions were invaded by Muslim Turk armies. During this period, the Mahabodhi Temple fell into disrepair and was largely abandoned.[3] Over the following centuries, the monastery's abbot or mahant position became occupied by the area's primary landholder, who claimed ownership of the Mahabodhi Temple grounds.

In the 13th century, Burmese Buddhists built a temple with the same name and modelled on the original Mahabodhi Temple. 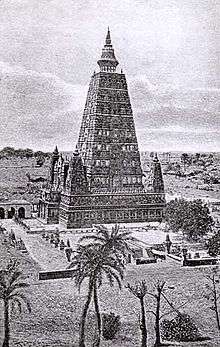 The temple as it appeared immediately after its restoration in 1880s

During the 11th century and the 19th century, Burmese rulers undertook restoration of the temple complex and surrounding wall.[10] In the 1880s, the then-British government of India began to restore Mahabodhi Temple under the direction of Sir Alexander Cunningham. In 1885, Sir Edwin Arnold visited the site and under guidance from Ven. Weligama Sri Sumangala published several articles drawing the attention of the Buddhists to the deplorable conditions of Buddhagaya.[11][12][13]

In 2013, the upper portion of the temple was covered with gold. The gold was a gift from the King of Thailand and devotees from Thailand, and installed with the approval Archaeological Survey of India.[14]

Control of the site

In 1891, the Sri Lankan Buddhist leader Anagarika Dharmapala, together with others such as Edwin Arnold,[15] started a campaign to return control of the temple to Buddhists, over the objections of the Hindu mahant.

The campaign was partially successful in 1949, when control passed from the Hindu mahant to the state government of Bihar, which established a Bodh Gaya Temple Management Committee (BTMC) under the Bodh Gaya Temple Act of 1949.[16] The committee has nine members, a majority of whom, including the chairman, must by law be Hindus.[17] Mahabodhi's first head monk under the management committee was Anagarika Munindra, a Bengali man who had been an active member of the Maha Bodhi Society. In 2013, the Bihar government amended the Bodh Gaya Temple Act of 1949, allowing for a non-Hindu to head the temple committee.[16]

On 7 July 2013, ten low-intensity bombs exploded in the temple complex, injuring 5 people. One bomb was near the statue of Buddha and another was near the Mahabodhi tree. Three unexploded bombs were also found and defused. The blasts took place between 5.30 a.m. and 6.00 a.m.[18][19] The main temple is intact and sanitized.[18] The Intelligence Bureau of India may have alerted state officials of possible threats around 15 days prior to the bombing.[20] On 4 November 2013, the National Investigation Agency announced that the Islamist jihadi group Indian Mujahideen was responsible for the bombings.[21][22]

Mahabodhi Temple is constructed of brick and is one of the oldest brick structures to have survived in eastern India. It is considered to be a fine example of Indian brickwork, and was highly influential in the development of later architectural traditions. According to UNESCO, "the present temple is one of the earliest and most imposing structures built entirely in brick from Gupta period" (300–600 CE).[3] Mahabodhi Temple's central tower rises 55 metres (180 ft), and were heavily renovated in the 19th century. The central tower is surrounded by four smaller towers, constructed in the same style.

The Mahabodhi Temple is surrounded on all four sides by stone railings, about two metres high. The railings reveal two distinct types, both in style as well as the materials used. The older ones, made of sandstone, date to about 150 BCE, and the others, constructed from unpolished coarse granite, are believed to be of the Gupta period. The older railings have scenes such as Lakshmi, the Hindu goddess of wealth, being bathed by elephants; and Surya, the Hindu sun god, riding a chariot drawn by four horses. The newer railings have figures of stupas (reliquary shrines) and garudas (eagles). Images of lotus flowers also appear commonly.

Images of the site include Avalokiteśvara (Padmapani, Khasarpana), Vajrapani, Tara, Marichi, Yamantaka, Jambhala and Vajravārāhī.[2] Images of Vishnu, Shiva, Surya and other Vedic deities are also associated with the site.[2] 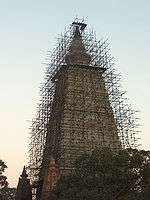 The temple undergoing repairs (from January, 2006).

The Bihar state government assumed responsibility for the protection, management, and monitoring of temple and its properties when India gained its independence. Pursuant to the Bodh Gaya Temple Act of 1949, such responsibilities are shared with the Bodhgaya Temple Management Committee, and an advisory board. By law, the Committee must consist of four Buddhist and four Hindu representatives, including the head of Sankaracharya Math monastery as an ex-officio Hindu member.[23] The Committee serves for a three-year term.[23] A 2013 Amendment to Bodhgaya Temple Management Act allows the Gaya District Magistrate to be the Chairman of committee, even if he is not Hindu.[24] The Advisory Board consists of the governor of Bihar and twenty to twenty-five other members, half of them from foreign Buddhist countries.

In June 2002, the Mahabodhi Temple became a UNESCO World Heritage Site.[23] All finds of religious artifacts in the area are legally protected under the Treasure Trove Act of 1878.

The temple's head monk, Bhikkhu Bodhipala, resigned in 2007 after he was charged with cutting the branches of Holy Bodhi Tree on a regular basis and selling them to foreigners for significant amounts of money. A newspaper alleged that wealthy Thai buyers bought a branch with the cooperation of senior members of the temple's management committee.[25] While the temple's spokesman stated that botanists had pruned the tree, the Bihar home secretary ordered the tree examined.[26] A criminal charge was filed against Bodhipala. If convicted, Bodhipala would be subject to at least 10 years' imprisonment.

Following the expiration of the Committee's term in September 2007, Bihar's government delayed appointing a new Committee and the district magistrate administered the temple pending such appointment.[23] Eventually, on May 16, 2008 the government announced the appointment of a new Temple Management Committee.[27]

Mahabodhi Temple is one of the most replicated Buddhist structures, both as temples and miniature replicas.[28]