The Sumida River (隅田川, Sumida-gawa) is a river that flows through Tokyo, Japan. It branches from the Arakawa River at Iwabuchi and flows into Tokyo Bay. Its tributaries include the Kanda and Shakujii rivers.

What is now known as the "Sumida River" was previously the path of the Ara-kawa. However, towards the end of the Meiji era work was carried out to divert the main flow of the Ara-kawa to prevent flooding.

It passes through the following wards of Tokyo: 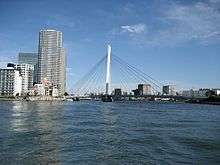 Chuo ohashi, one of the many bridges over the Sumida 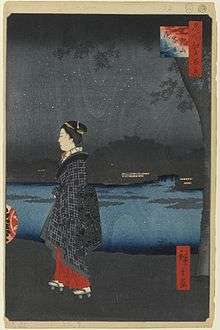 San-ya-bori Canal in the Sumida River. Ukiyoe woodprint by Utagawa Hiroshige in the Edo period

The Noh play Sumida-gawa, which the British composer Benjamin Britten saw while visiting Japan in 1956, inspired him to compose Curlew River (1964), a dramatic work based on the story.

The kabuki play, Sumida-gawa — Gonichi no Omokage, is perhaps better known by the title Hokaibo, which is the name of the central character. This stage drama was written by Nakawa Shimesuke, and it was first produced in Osaka in 1784. The play continues to be included in kabuki repertoire in Japan; and it is also performed in the West. It was recreated by the Heisei Nakamura-za in the Lincoln Center Festival in New York in the summer of 2007, with Nakamura Kanzaburō XVIII leading the cast.[1]

The Sumida River Fireworks, which are recognized as one of the oldest and most famous firework displays in Japan, are launched from barges across the river, between Ryōgoku and Asakusa during Summer, a festival is also held at the same time.

The poet Matsuo Bashō lived by the Sumida River, alongside the famous banana tree (Japanese: bashō) from which he takes his nom de plume.[2]

The Sumida River appears in a haiku by Issa from 1820:

Katsushika Hokusai view of the Ryōgoku-bashi as an ukiyoe print

View of the Nihon-bashi at dawn, a ukiyoe print by Hiroshige

View of the banks of Sumida river, in a Hiroshige III print 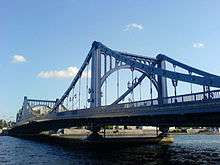 The Sumida runs through Tokyo for 27 kilometers, under 26 bridges spaced at about one bridge per kilometer. Amongst these, the principal ones are:

The mouth of the Sumida River (facing southwest) enters the Tokyo Port region of Tokyo Bay. The bridge visible is the Kachidoki Bridge (Kachidoki Ohashi). To the left (east) of the river is the lower portion of Tsukishima (island neighborhood): the two twin towers on the island are The Tokyo Towers, a condominium complex. Further to the left (east) is the blue smokestack of the Chuo Incineration Plant on Harumi Island. On the top left horizon is Odaiba. To the right (west) is the Tsukiji neighborhood, with the famous Tsukiji fish market visible to the right of and behind the reddish building (it is the shape of a quarter-circle). The large garden behind the market are the Hamarikyu Gardens. The coffee-colored building to the right of Tsujkiji market (with the slanting bottom) is the headquarters of the Asahi Shimbun. The collection of modern skyscrapers immediately behind the Asahi Shimbun make up the Shiodome area; and behind those towers is the top of Tokyo Tower.