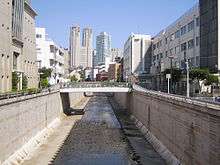 The Kanda River in Nakano. The Tokyo Metropolitan Government Building is in the background 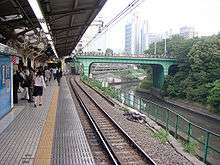 The Kanda River at Ochanomizu Station. The Chūō Line runs along the river

The Kanda River (神田川, Kandagawa) stretches 24.6 km from Inokashira Park in Mitaka to the Sumida River under the Ryōgoku Bridge at the boundary of Taitō, Chūō, and Sumida. Its entire length lies within Tokyo, Japan. It drains an area of 105.0 km². The government of Japan classifies it as a Class I river.

The Zenpukuji, Momozono, and Myōshō-ji rivers are tributaries of the Kanda. The outer moat of the Imperial Palace is also a tributary. The Nihonbashi River is a distributary of the Kanda.

Construction began in the 1980s of a diversion tunnel which could temporarily store excess water which historically has been a big problem causing flooding to thousands of homes during powerful typhoons or torrential downpours. The Kanda River Underground Diversion Channel is actually one huge tunnel built under major roads. The plan is to construct a 4.5-km tunnel, 13 m wide tunnel 40 meters below street level. The first 2 km section was completed in 1997, and it can hold the runoff of 50 mm of rain falling in one hour. The reservoir has drawn water from the river on more than a dozen occasions since it opened, and the Kanda River has not flooded during that time. Plans call for the tunnel to be extended to Tokyo Bay, literally creating a second, underground Kanda River.[1]

In the middle section of the length of the river, there is a 2.1 km section from the area near Toden Arakawa Line Waseda Station to near Iidabashi Station which was formerly called Edo River (江戸川, Edogawa). The name of this section was changed to Kanda River in August 1970, consistent with the name of the rest of the river. Most other nearby place names nearby deriving from "Edogawa" had disappeared by 1966, but some remain, including Edogawabashi Station, the bridge after which the station was named, and Edogawa Park (江戸川公園, Edogawa kōen) in Bunkyo, Tokyo. Additionally, until the late Meiji period, the banks of the river between Ishikiri bridge (石切橋, Ishikiribashi) and Ryūkei bridge (隆慶橋, Ryūkeibashi) were considered to be one of the best cherry blossom sites in Tokyo.

The folk group Kaguyahime released the song Kandagawa. Keiko Sekine (Takahashi) and Masao Kusakari starred in a film based on the song. Japanese pianist Nobuyuki Tsujii composed the music Whisper of the River to express his love for his father after the two took a walk along the Kanda River.[2]

This article is issued from Wikipedia - version of the 3/4/2013. The text is available under the Creative Commons Attribution/Share Alike but additional terms may apply for the media files.