Sumida (墨田区, Sumida-ku, "Field of Ink") is a special ward located in Tokyo Metropolis, Japan. The English translation of its Japanese self-designation is Sumida City.

Sumida is in the northeastern part of the mainland portion of Tokyo. The Sumida and Arakawa are the major rivers, and form parts of its boundaries. Its neighbors are all special wards: Adachi to the north; Arakawa to the northwest; Katsushika to the east; Edogawa to the southeast; Taitō to the west; Chūō to the southwest; and Kōtō to the south. 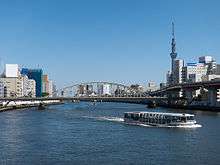 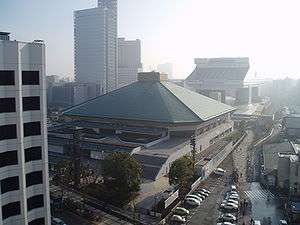 The ward was founded on March 15, 1947. It was previously the (ordinary) wards Honjo and Mukojima. Mukojima, formed in 1932, contained the former town of Sumida, which along with the river gave the ward its name.

As of 2005, the mayor is Noboru Yamazaki. The council consists of 34 members.

For more details on this topic, see Transport in Greater Tokyo.

Public elementary and middle schools are operated by Sumida.