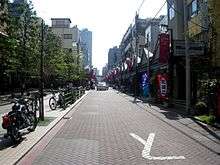 Monja Street, known as the "Home of Monjayaki".

Tsukishima (月島) is a place located in Chūō, Tokyo, Japan. It is an island formed of reclaimed land completed in 1892, using earth from the dredging work performed to create a shipping channel in Tokyo Bay. At this time, it was designated an area for iron-working in accordance with the Fukoku Kyōhei National Policy. The second area of reclaimed land forming the island was completed two years later in 1894. It has been said that the name (literally "moon island") was originally written using the characters 築島 which can also be read "Tsukishima" but mean "constructed island".

It is currently known for its large number of restaurants serving the local speciality, monjayaki.

Tsukishima station is served by the Tokyo Metro Yurakucho Line and the Toei Subway Oedo Line.

Upper portion of Tsukishima (island neighborhood). The Sumida River crosses in the foreground; the bridge on the bottom left is the Tsukuda Bridge (Tsukuda Ohashi), above that is the white Chou Bridge (Chuo Ohashi), and above that the blue Eitai Bridge (Eitai-bashi).