Super Audio CD (SACD) is a read-only optical disc for audio storage, introduced in 1999. It was developed jointly by Sony and Philips Electronics, and intended to be the successor to their Compact Disc (CD) format. While the SACD format can offer more channels (e.g. surround sound), and a longer playing time than CD, research published in 2007 found no significant difference in audio quality between SACD and standard CD at ordinary volume levels.[1]

Having made little impact in the consumer audio market, by 2007 SACD was deemed to be a failure by the press.[2] A small market for SACD has remained, serving the audiophile community.[3]

The Super Audio CD format was introduced in 1999.[2] Royal Philips and Crest Digital partnered in May 2002 to develop and install the first SACD hybrid disc production line in the USA, with a production capacity of 3 million discs per year.[4] SACD did not achieve the same level of growth that Compact discs enjoyed in the 1980s,[5] and was not accepted by the mainstream market.[6][7][8]

By October 2009, record companies had published more than 6,000 SACD releases, slightly more than half of which were classical music. Jazz and popular music albums, mainly remastered previous releases, were the next two most numerous genres represented.[9][10]

Many popular artists have released some or all of their back catalog on SACD. Pink Floyd's album The Dark Side of the Moon (1973) sold over 800,000 copies by June 2004 in its SACD Surround Sound edition.[11] The Who's rock opera Tommy (1969), and Roxy Music's Avalon (1982), were released on SACD to take advantage of the format's multi-channel capability. All three albums were remixed in 5.1 surround, and released as hybrid SACDs with a stereo mix on the standard CD layer.

Between 2007 and 2008, Genesis re-released all of their studio albums across three box sets. Each album in these sets contains the original album on SACD in both stereo and 5.1 mixes. The US & Canada versions do not use SACD but CD instead.

By August 2009 443 labels[12] had released one or more SACDs. Instead of depending on major label support, some orchestras and artists have released SACDs on their own. For instance, the Chicago Symphony Orchestra started the Chicago Resound label to provide full support for high-resolution SACD hybrid discs,[13] and the London Symphony Orchestra established their own 'LSO Live' label.[14]

Many of the SACD discs that were released from 2000-2005 are now out of print and are available only on the used market.[3][15] By 2009, the major record companies were no longer regularly releasing discs in the format, with new releases confined to the smaller labels.[16]

SACD is a disc of identical physical dimensions as a standard compact disc; the density of the disc is the same as a DVD. There are three types of disc:[17]

Unlike hybrid discs, both single- and dual-layer SACD's are incompatible with conventional CD players and cannot be played on them.

A stereo SACD recording has an uncompressed rate of 5.6 Mbit/s, four times the rate for Red Book CD stereo audio.[17] Other technical parameters are as follows:

Commercial releases commonly included both surround sound (five full-range plus LFE multi-channel) and stereo (dual-channel) mixes on the SACD layer. Some reissues however, retained the mixes of earlier multi-channel formats (examples include the 1973 quadraphonic mix of Mike Oldfield's Tubular Bells and the 1957 three-channel stereo recording by the Chicago Symphony Orchestra of Mussorgsky's Pictures at an Exhibition, reissued on SACD in 2001 and 2004 respectively). 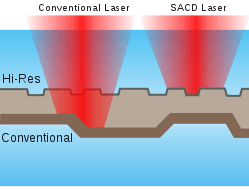 SACD audio is stored in a format called Direct Stream Digital (DSD), which differs from the conventional Pulse-code modulation (PCM) used by the compact disc or conventional computer audio systems.

DSD is 1-bit, has a sampling rate of 2.8224 MHz, and makes use of noise shaping quantization techniques in order to push 1-bit quantization noise up to inaudible ultrasonic frequencies. This gives the format a greater dynamic range and wider frequency response than the CD. The SACD format is capable of delivering a dynamic range of 120 dB from 20 Hz to 20 kHz and an extended frequency response up to 100 kHz, although most currently available players list an upper limit of 70–90 kHz,[22] and practical limits reduce this to 50 kHz.[17] Because of the nature of sigma-delta converters, one cannot make a direct technical comparison between DSD and PCM. DSD's frequency response can be as high as 100 kHz, but frequencies that high compete with high levels of ultrasonic quantization noise.[23] With appropriate low-pass filtering, a frequency response of 20 kHz can be achieved along with a dynamic range of nearly 120 dB, which is about the same dynamic range as PCM audio with a resolution of 20 bits.

To reduce the space and bandwidth requirements of Direct Stream Digital (DSD), a lossless data compression method called Direct Stream Transfer (DST) is used. DST compression is compulsory for multi-channel regions and optional for stereo regions. This typically compresses by a factor of between two and three, allowing a disc to contain 80 minutes of both 2-channel and 5.1-channel sound.[24]

SACD has several copy protection features at the physical level, which made the digital content of SACD discs difficult to copy until the jailbreak of the PlayStation 3. The content may be copyable without SACD quality by resorting to the analog hole, or ripping the conventional 700 MB layer on hybrid discs. Copy protection schemes include physical pit modulation and 80-bit encryption of the audio data, with a key encoded on a special area of the disc that is only readable by a licensed SACD device. The HD layer of an SACD disc cannot be played back on computer CD/DVD drives, and SACDs can only be manufactured at the disc replication facilities in Shizuoka and Salzburg.[33] [34] However, PlayStation 3 with a SACD drive and appropriate firmware can use specialized software to extract a DSD copy of the HD stream.[35]

Sound quality parameters achievable by the Red Book CD-DA and SACD formats compared with the limits of human hearing are as follows:

In the audiophile community, the sound from the SACD format is thought to be significantly better than that of CD. For example, one supplier claims that "The DSD process used for producing SACDs captures more of the nuances from a performance and reproduces them with a clarity and transparency not possible with CD."[39]

In September 2007 the Audio Engineering Society published the results of a year-long trial, in which a range of subjects including professional recording engineers were asked to discern the difference between SACD and a compact disc audio (44.1 kHz/16 bit) conversion of the same source material under double blind test conditions. Out of 554 trials, there were 276 correct answers, a 49.8% success rate corresponding almost exactly to the 50% that would have been expected by chance guessing alone.[40] When the level of the signal was elevated by 14 dB or more, the test subjects were able to detect the higher noise floor of the CD quality loop easily.[1] The authors commented:

Now, it is very difficult to use negative results to prove the inaudibility of any given phenomenon or process. There is always the remote possibility that a different system or more finely attuned pair of ears would reveal a difference. But we have gathered enough data, using sufficiently varied and capable systems and listeners, to state that the burden of proof has now shifted. Further claims that careful 16/44.1 encoding audibly degrades high resolution signals must be supported by properly controlled double-blind tests.[1][41]

Following criticism that the original published results of the study were not sufficiently detailed, the AES published a list of the audio equipment and recordings used during the tests.[42]

Double-blind listening tests in 2004 between DSD and 24-bit, 176.4 kHz PCM recordings reported that among test subjects no significant differences could be heard.[43] DSD advocates and equipment manufacturers continue to assert an improvement in sound quality above PCM 24-bit 176.4 kHz.[44] Despite both formats' extended frequency responses, it has been shown people cannot distinguish audio with information above 21 kHz from audio without such high-frequency content.[45]

The Sony SCD-1 player was introduced concurrently with the SACD format in 1999, at a price of approximately US$5,000.[46] It weighed over 26 kilograms (57 lb) and played two-channel SACDs and Red Book CDs only. Electronics manufacturers, including Onkyo,[47] Denon,[48] Marantz,[49] Pioneer[50] and Yamaha[51] offer or offered SACD players. Sony has made in-car Super Audio CD players.[52]

SACD players are not permitted to offer an output carrying an unencrypted stream of Direct Stream Digital (DSD).[53]

The first two generations of Sony's PlayStation 3 game console were capable of reading SACD discs. Starting with the third generation (introduced October 2007), SACD playback was removed.[54] All PS3 models however will play DSD Disc format. PS3 was capable of converting multi-channel DSD to lossy 1.5 Mbit/s DTS for playback over S/PDIF using the 2.00 system software. The subsequent revision removed the feature.[55]