Susan Elizabeth Ford Bales (born July 6, 1957) is an American author, photojournalist, and former chair of the board of the Betty Ford Center for alcohol and drug abuse.

Ford is the youngest child and only daughter of former U.S. President Gerald Ford and former First Lady Betty Ford. She was one of three people targeted for violence by the Symbionese Liberation Army and had Secret Service protection well before her father became president. As a teenager attending the Holton-Arms School in Bethesda, Maryland, she held her senior prom, for the class of 1975, in the East Room of the White House.[1] She served as official White House hostess when her mother was hospitalized for breast cancer.

Ford enrolled in Mount Vernon College for Women (now part of the George Washington University) in northwest Washington, D.C. in 1975 when her father was in the White House. She later transferred to the University of Kansas for the spring semester of 1977.[2] 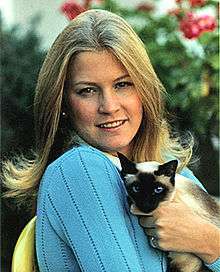 Ford Bales trained as a photographer and worked as a photojournalist for the Associated Press, Newsweek, Money Magazine, Ladies Home Journal, the Topeka Capital-Journal, the Omaha Sun and also freelanced.[3] She was hired to shoot publicity stills for the film Jaws 2,[4] with many appearing in Ray Loynd's book Jaws 2 Log.[5]

In 1992 she became a member of the board of the Betty Ford Center and in 2005 became chair of the organization. She succeeded her mother, who remained a board member.[6]

In 2002 she wrote, with Laura Hayden, a novel, Double Exposure: A First Daughter Mystery, with a contemporary White House setting; in 2005 a sequel, Sharp Focus, was published.

In recent years and in addition to her responsibilities at the Betty Ford Center, Ford has been very active on behalf of her parents and the Ford family at numerous events throughout the US. That was particularly so during the December 26, 2006 – January 3, 2007 state funeral services and ceremonies for her father. During that period, she attended each of the services and ceremonies with her mother, and over the course of several days personally greeted mourners while President Ford's casket lay-in-state on the Lincoln Catafalque in the Capital Rotunda and during the public repose at the Gerald R. Ford Presidential Museum in Grand Rapids, Michigan.[7] She read a passage from the Letter of James during the funeral service at the Washington National Cathedral, and her daughter Tyne Berlanga offered one of the Prayers during the funeral service at Grace Church in Grand Rapids.[8] In addition, on January 1, she assisted her mother in receiving dignitaries and other official visitors who had come to the President's Guest House (a.k.a "Blair House") to pay their personal respects. 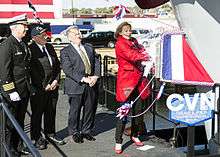 On January 16, 2007, Susan Ford spoke at a Naming Ceremony at the Pentagon.[9] At the ceremony, the aircraft carrier CVN-78, now under construction, was officially named the USS Gerald R. Ford. That same day Secretary of the Navy Donald Winter announced that Ford had been named the carrier's ceremonial sponsor. On November 14, 2009, Ford participated in the keel laying for the ship.[10][11]

On June 11, 2007, she delivered remarks in Washington, D.C. at the ceremony unveiling the U.S. Postal Service's image of the commemorative stamp honoring President Ford. In July 2007, Ford represented her mother at the funeral service of former First Lady Lady Bird Johnson. Also in July 2007, she and her husband Vaden Bales represented Mrs. Ford and the Ford family at the naming of the Gerald R. Ford Post Office in Vail, Colorado.

She married Charles Vance, one of her father's former U.S. Secret Service agents, on February 10, 1979. For a time they operated a private security company in Washington. They have two daughters, Tyne Mary Vance (born 1980) and Heather Elizabeth Vance (born 1983), but were divorced in 1988. Ford married attorney Vaden Bales in 1989.

In Betty Ford's Betty – A Glad Awakening, her mother credits Susan with having orchestrated an intervention in 1982 after the Ford family became concerned with her drinking, addictions and behavior.[13] In 1984, Ford and her mother, Betty Ford, helped launch National Breast Cancer Awareness Month[14] with a joint appearance in an ad campaign.

She and her husband lived in Tulsa, Oklahoma, after their marriage on July 25, 1989. In 1997 they moved to Albuquerque, New Mexico, where they lived for nearly 12 years before returning to Tulsa in 2009. At age 53 in 2010, Ford went into sudden cardiac arrest while exercising on an elliptical machine. She had no prior knowledge of her having heart disease. Ford says she was "extremely lucky" that while she was in the gym, a surgeon was "walking up the steps" and "shocked" her back. She was revived with an automated external defibrillator. After her recovery, she was given a heart stent and pacemaker. She spoke of the experience on June 4, 2013 at the American Heart Association's Heart Ball in Grand Rapids.[15]