For other uses of "KU", see KU (disambiguation).

The University of Kansas, often referred to as KU or Kansas, is a public research university in the U.S. state of Kansas. The main campus in Lawrence, one of the largest college towns in Kansas,[6] is on Mount Oread, the highest elevation in Lawrence. KU branch campuses are located in the cities of Wichita, Overland Park, Salina, and Kansas City, Kansas. Founded March 21, 1865, the university was opened in 1866, under a charter granted by the Kansas State Legislature in 1864[7] following enabling legislation passed in 1863 under the Kansas State Constitution, adopted two years after the 1861 admission of the former Kansas Territory as the 34th state into the Union following an internal civil war known as "Bleeding Kansas" during the 1850s.[8]

The university's Medical Center and University Hospital are in Kansas City, Kansas. The Edwards Campus is in Overland Park, Kansas, in the Kansas City metropolitan area. There are also educational and research sites in Parsons, Topeka, Garden City, Hays, and Leavenworth, and branches of the University of Kansas School of Medicine in Wichita and Salina. The university is one of the 62 members of the Association of American Universities.

Main article: History of the University of Kansas

On February 20, 1863, Kansas Governor Thomas Carney signed into law a bill creating the state university in Lawrence.[13] The law was conditioned upon a gift from Lawrence of a $15,000 endowment fund and a site for the university, in or near the town, of not less than forty acres (16 ha) of land.[14] If Lawrence failed to meet these conditions, Emporia instead of Lawrence would get the university.

The site selected for the university was a hill known as Mount Oread, which was owned by former Kansas Governor Charles L. Robinson. Robinson and his wife Sara bestowed the 40-acre (16 ha) site to the State of Kansas in exchange for land elsewhere.[14] The philanthropist Amos Adams Lawrence donated $10,000 of the necessary endowment fund, and the citizens of Lawrence raised the remaining cash by issuing notes backed by Governor Carney.[14] On November 2, 1863, Governor Carney announced that Lawrence had met the conditions to get the state university, and the following year the university was officially organized.[7] The school's Board of Regents held its first meeting in March 1865, which is the event that KU dates its founding from.[1][15] Work on the first college building began later that year.[7] The university opened for classes on September 12, 1866, and the first class graduated in 1873.[7]

During World War II, Kansas was one of 131 colleges and universities nationally that took part in the V-12 Navy College Training Program which offered students a path to a Navy commission.[16]

KU is home to the Robert J. Dole Institute of Politics, the Beach Center on Disability, Lied Center of Kansas and radio stations KJHK, 90.7 FM, and KANU, 91.5 FM. The university is host to several museums including the University of Kansas Natural History Museum and the Spencer Museum of Art. The libraries of the University include the Watson Library, Spencer Research Library, and Anschutz Library, which commemorates the businessman Philip Anschutz, an alumnus of the University.

The University of Kansas is a large, state-sponsored university, with five campuses. KU features the College of Liberal Arts & Sciences, which includes the School of the Arts and the School of Public Affairs & Administration; and the schools of Architecture, Design & Planning; Business; Education; Engineering; Health Professions; Journalism & Mass Communications; Law; Medicine; Music; Nursing; Pharmacy; and Social Welfare. The university offers more than 345 degree programs. 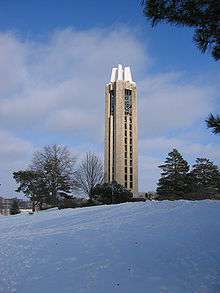 The city management and urban policy program was ranked first in the nation, and the special education program second, by U.S. News & World Report's 2016 rankings.[25] USN&WR also ranked several programs in the top 25 among U.S. universities.[25]

According to the journal DesignIntelligence, which annually publishes "America's Best Architecture and Design Schools," the School of Architecture and Urban Design at the University of Kansas was named the best in the Midwest and ranked 11th among all undergraduate architecture programs in the U.S in 2012.[26] 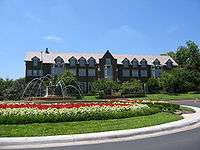 Named one of the best business schools in the Midwest by Princeton Review, the KU School of Business has been continually accredited by the Association to Advance Collegiate Schools of Business (AACSB) for its undergraduate and graduate programs in business and accounting.[28] 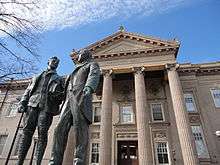 The University of Kansas School of Law, founded in 1878, was the top law school in the state of Kansas, and tied for 65th nationally, according to the 2016 U.S. News & World Report "U.S. News Best Colleges Rankings."[25] Classes are held in Green Hall at W 15th St and Burdick Dr, which is named after former dean James Green.[29]

School of Journalism and Mass Communications

The William Allen White School of Journalism and Mass Communications is recognized for its ability to prepare students to work in a variety of media. The school offers two tracts of study: 1) News and Information, and 2) Strategic Communication. This professional school teaches students reporting for print, online and broadcast, strategic campaigning for PR and advertising, photojournalism and video reporting and editing. The J-School's students maintain various publications on campus, including The University Daily Kansan, Jayplay magazine, and KUJH TV. In 2008, the Fiske Guide to Colleges praised the KU J-School for its strength. In 2010, the School of Journalism and Mass Communications placed second at the prestigious Hearst Foundation national writing competition.[31] 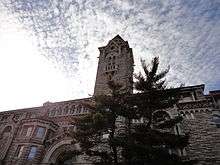 The University of Kansas Medical Center features three schools: the School of Medicine, School of Nursing, and School of Health Professions that each has its own programs of graduate study. As of the Fall 2013 semester, there were 3,349 students enrolled at KU Med.[11] The Medical Center also offers four year instruction at the Wichita campus, and features a medical school campus in Salina, Kansas devoted to rural health care.

KU's Edwards Campus is in Overland Park, Kansas. Established in 1993, its goal is to provide adults with the opportunity to complete college degrees. About 2,100 students attend the Edwards Campus, with an average age of 32.[32] Programs available at the Edwards Campus include developmental psychology, public administration, social work, systems analysis, information technology, engineering management and design.

Tuition at KU is 13 percent below the national average, according to the College Board, and the University remains a best buy in the region.

Beginning in the 2007–2008 academic year, first-time freshman at KU pay a fixed tuition rate for 48 months according to the Four-Year Tuition Compact passed by the Kansas Board of Regents. For the 2014–15 academic year, tuition was $318 per credit hour for in-state freshman and $828 for out-of-state freshmen. For transfer students, who do not take part in the compact, 2014–15 per-credit-hour tuition was $295 for in-state undergraduates and $785 for out-of-state undergraduates; subject to annual increases. Students enrolled in 6 or more credit hours also paid an annual required campus fee of $888.[33] The schools of architecture, music, arts, business, education, engineering, journalism, law, pharmacy, and social welfare charge additional fees.

KU's academic computing department was an active participant in setting up the Internet and is the developer of the early Lynx text based web browser. Lynx provided hypertext browsing and navigation prior to Tim Berners Lee's invention of HTTP and HTML.[34] 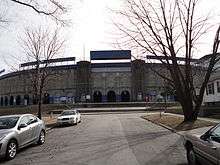 KU football dates from 1890, and has played in the Orange Bowl three times: 1948, 1968, and 2008. They are currently coached by David Beaty, who was hired in 2014.[36] In 2008, under the leadership of Mark Mangino, the #7 Jayhawks emerged victorious in their first BCS bowl game, the FedEx Orange Bowl, with a 24–21 victory over the #3 Virginia Tech Hokies. This capstone victory marked the end of the most successful season in school history, in which the Jayhawks went 12–1 (.923). The team plays at Memorial Stadium, which recently underwent a $31 million renovation to add the Anderson Family Football Complex, adding a football practice facility adjacent to the stadium complete with indoor partial practice field, weight room, and new locker room.

The KU men's basketball team has fielded a team every year since 1898. The Jayhawks are a perennial national contender, coached by Bill Self. The team has won five national titles, including three NCAA tournament championships in 1952, 1988, and 2008. The basketball program is currently the second winningest program in college basketball history with an overall record of 2,070–806 through the 2011–12 season. The team plays at Allen Fieldhouse. Perhaps its best recognized player was Wilt Chamberlain, who played in the 1950s.

Sheahon Zenger was introduced as KU's new athletic director in January 2011.[38] Under former athletic director Lew Perkins, the department's budget increased from $27.2 million in 2003 (10th in the conference) to currently over $50 million thanks in large part to money raised from a new priority seating policy at Allen Fieldhouse, a new $26.67 million eight-year contract with Adidas replacing an existing contract with Nike, and a new $40.2 million seven-year contract with ESPN Regional Television. The additional funds brought improvements to the university, including:[39] 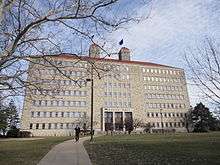 Notable among a number of songs commonly played and sung at various events such as commencement and convocation, and athletic games are: "I’m a Jayhawk", "Fighting Jayhawk", "Kansas Song", "Sunflower Song", "Crimson and the Blue", "Red and Blue", the "Rock Chalk, Jayhawk" chant", "Home on the Range" and "Stand Up and Cheer."[42]

The university's newspaper is University Daily Kansan, which placed first in the Intercollegiate Writing Competition of the prestigious William Randolph Hearst Writing Foundation competition, often called "The Pulitzers of College Journalism" in 2007. In Winter 2008, a group of students created KUpedia, a wiki about all things KU. They received student funding for operations in 2008–09. The KU Department of English publishes the Coal City Review, an annual literary journal of prose, poetry, reviews and illustrations. The Review typically features the work of many writers, but periodically spotlights one author, as in the case of 2006 Nelson Poetry Book Award-winner Voyeur Poems by Matthew Porubsky.[43][44]

The University Daily Kansan operates outside of the university's William Allen White School of Journalism[45] and reaches at least 30,000 daily readers through its print and online publications[46] 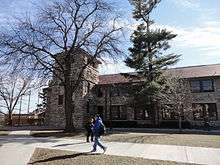 The university houses the following public broadcasting stations: KJHK, a student-run campus radio station, KUJH-LP, an independent station that primarily broadcasts public affairs programs, and KANU, the NPR-affiliated radio station. Kansas Public Radio station KANU was one of the nation's first public radio stations. KJHK, the campus radio has roots back to 1952 and is completely run by students. 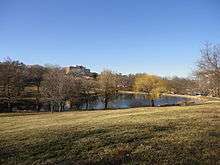 Potter Lake, with Joseph R. Pearson Hall in the background

The first union was built on campus in 1926 as a campus community center.[50] The unions are still the "living rooms" of campus, and include three locations – the Kansas Union and Burge Union at the Lawrence Campus and Jayhawk Central at the Edwards Campus. The KU Memorial Unions Corporation manages the KU Bookstore (with seven locations). The KU Bookstore is the official bookstore of KU. The Corporation also includes KU Dining Services, with more than 20 campus locations, including The Market (inside the Kansas Union) and The Underground (located in Wescoe Hall). The KU Bookstore and KU Dining Services are not-for-profit, with proceeds supporting student programs, such as Student Union Activities.

KU Endowment was established in 1891 as America’s first foundation for a public university. Its mission is to partner with donors in providing philanthropic support to build a greater University of Kansas.[51]