It is the home ground of Tai Po FC. It staged its first ever Hong Kong First Division League game on 30 September 2006, when Tai Po FC played South China AA here. Tai Po FC eventually lost 2:3. All 2,020 tickets for the match was sold out.[1]

After the game, the sports ground is found to be unsuitable for future first division games. But refurbishment work begun in 2007 to upgrade the facilities, including refurbishing the changing rooms, building corporate boxes, installing new goal posts and replanting the grass, so that Tai Po FC can play all its home games in the 2007-08 league season here. The work will cost the Leisure and Cultural Department HK$1 million.

On 3 August 2007, the HKFA agreed to allow Tai Po FC to play 9 games at the Tai Po Sports Ground in the 2007/08 league season, regardless whether the games are home or away. There are likely to be other first division matches for two other clubs at the ground on the same days as well. But in the pre-season pitch examination, HKFA decided that it was not up to standard for First Division matches and in the end no game was held at the ground. 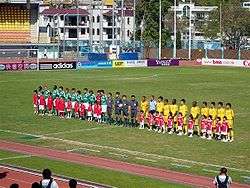 With a potential 13 teams competing in the 2008-09 season, the HKFA reckons that Mongkok Stadium's pitch will not be able to handle the large number of games to be played and once again suggested using Tai Po Sports Ground for NTRA Wofoo Tai Po's home games. The HKFA's schedule for the first half of the 2008-09 season has shown that Tai Po FC has been granted the rights to play six of its home games here.[2]

This article is issued from Wikipedia - version of the 3/2/2013. The text is available under the Creative Commons Attribution/Share Alike but additional terms may apply for the media files.