Yuen Long Stadium is a football stadium at 6 Tai Yuk Road, Yuen Long, New Territories, Hong Kong. It was originally just some empty land besides Shui Bin Village. Then Yuen Long District Sports Association decided to build a stadium at the site and received support from the locals. The contract was open for bidding and Yuen Long Cheong Kee won the contract for HK$198,000 in 1965.

The stadium opened in 1969 with a football game between Yuen Long and Fire Services. On the same day, a marathon sponsored by Tin Tin Daily was held.

In 1983, the Royal Hong Kong Jockey Club provided HK$12 million for an expansion. A new 2,000 capacity covered grandstand, 8 lane all weather runway and relaying the grass of the entire pitch were added to the stadium.

In recent years, it is transferred to and operated by the Leisure and Culture Services Department of Hong Kong. It currently hosts Hong Kong Premier League matches as the home stadium for Yuen Long FC. The stadium has a capacity of 5,000. 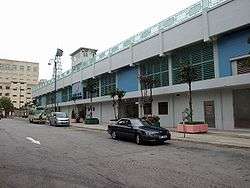 The stadium has a natural grass pitch and a 400m running track.

In July 2008, TSW Pegasus applied to the Hong Kong Football Association to use Yuen Long Stadium for its home matches. The HKFA rejected the application due to the lack of guarantee on the quality of the grass turf. In September 2008, TSW Pegasus requested to play their home game against South China AA on 5 October at Yuen Long Stadium, with the agreement of South China AA. The HKFA thus decided to play the game here. The other game involving Mutual FC and Citizen on the same date will likely be moved here also, provided the two teams agree.[1] The stadium manager said he cannot guarantee the pitch quality for more future home games for TSW Pegasus.[2]

The HKFA officials and TSW Pegasus chairman visited the ground with Yuen Long Stadium officials on 17 September 2008, with the hope of using it for TSW Pegasus's home games. After a one and a half hour meeting, the HKFA understood that the stadium is not up to FIFA standards. There are not enough changing rooms for 4 teams; no scoreboards; no ticket sales booths and substitutes' benches. Also the spectators' exits are not clearly indicated. HKFA official Lam Shing Kui claims the stadium is only suitable for one game per match day.

On the other hand, the stadium's grass turf, lighting system, VIP room, first-aid room, match officials' room and changing rooms are up to standard. VIP areas, media room and internet facilities can be temporarily set up. Substitutes' benches can be borrowed from Tai Po Sports Ground. The HKFA and Yuen Long Stadium will discuss again the possibility of hosting home games for TSW Pegasus at the stadium on 26 September.[3]

HKFA chairman Brian Leung confirmed that the Mutual FC and Citizen AA game at 12:30pm as requested by the clubs, while TSW Pegasus will play South China AA at 4:00pm. However, both games were postponed due to heavy rain.[4] The TSW Pegasus vs South China AA game will now be played on 8 October 2008 at 20:00.

Sun Pegasus used the stadium as their home ground from 2009–2013 in the Hong Kong First Division League.[5]