Ted Stevens Anchorage International Airport (IATA: ANC, ICAO: PANC, FAA LID: ANC)[2] is a major airport in the U.S. state of Alaska, located 5 miles (8 kilometers) southwest of downtown Anchorage.[1] The airport is named in honor of Ted Stevens, the U.S. Senator from Alaska serving from 1968 to 2009. It is included in the National Plan of Integrated Airport Systems, which categorized it as a primary commercial service (medium hub) airport based on 2,249,717 enplanements in 2012.[3]

Built in 1951 as Anchorage International Airport, the airport was served in the 1950s by Alaska Airlines, Northwest Orient, Pacific Northern Airlines and Reeve Aleutian Airways, using aircraft ranging from Douglas DC-3s to Boeing 377s,[4] and was also a refueling stop for Canadian Pacific Air Lines service to the Far East (one such aircraft being involved in a 1951 disappearance). From 1955 to 2011, the eastern end of the airport's southernmost runway connected to the Kulis Air National Guard Base, which was located on land leased by the airport.

Anchorage was a common stopover for passengers flying to East Asia until the late 1980s because Chinese and Soviet airspace were off-limits and because the first generation of jets and widebody airliners did not have the range to fly non-stop across the Pacific Ocean. Carriers using Anchorage for this purpose included:

Most scheduled passenger service from Anchorage to Europe and Asia ceased in the early 1990s following the end of the Cold War. Korean Air continued to serve Anchorage on a scheduled basis until the early 2000s. China Airlines, the last Asian carrier to serve Anchorage on a regular basis, used Anchorage as an intermediate stop on its Taipei-New York route until 2011, when it rerouted these flights to stop in Osaka. While a few charter passenger aircraft still stop at Anchorage on flights between Asia and the eastern United States, scheduled cargo carriers – which benefit from more volume and thus shorter route segments – continue to use Anchorage frequently.

In the 1990s, Alaska Airlines and Aeroflot operated service from Anchorage to several destinations in the Russian Far East, including Khabarovsk, Magadan, Petropavlovsk, Vladivostok and Yuzhno-Sakhalinsk.[12] Alaska Airlines pulled out of these markets in 1998 due to insufficient demand,[13] while the Aeroflot services were primarily intended as technical stops en route to Seattle and San Francisco and were cancelled once newer aircraft and nonstop rights became available. Reeve Aleutian Airways, Dalavia and MAVIAL Magadan Airlines also offered service between Anchorage and the Russian Far East at various times, catering to Kamchatka oil exploration and other niche markets.[14]

The airport was renamed in 2000 by the Alaska Legislature to honor then long-standing U.S. Senator Ted Stevens.[15]

Ted Stevens Anchorage International Airport's passenger traffic has hovered around the five million mark for the last 10 years, apart from in 2002 when the airport suffered a 13% drop in traffic. Fairbanks and Juneau are the next busiest airports though neither managed more than half a million passengers last year. Anchorage traffic peaks in June, July and August when passenger numbers are twice as high as between October and April.[16] Most major U.S. passenger carriers serve ANC, with the majority of passenger flight operations by Alaska Airlines to and from Seattle (an average of 20 flights per day) and Fairbanks (an average of 13 flights per day).

Anchorage is also envisioned as a future connecting point for air traffic to the Russian Far East. During the summer season 2008, there was one weekly flight to Russia by Vladivostok Air. Yakutia Airlines resumed summer seasonal service to Russia in 2012.[17] Many of Alaska's North Slope workers live either in Anchorage or elsewhere in the Lower 48 states and fly through the airport to their jobs in Prudhoe Bay.

Ted Stevens Anchorage International Airport is also a major cargo hub. As of 2015, it ranked as the fourth busiest airport in the world by cargo traffic, after Hong Kong, Memphis, and Shanghai.

FedEx Express and UPS Airlines operate major hubs at Anchorage International for cargo heading to and from the Far East.[16] NWA Cargo used to operate a major hub at the airport until December 28, 2009 when it closed all operations for Northwest Cargo at all airports. FedEx Express is the airport's largest cargo facility and can handle as many as 13,400 packages per hour, employing more than 1,200 people and providing a full customs clearance system. United Parcel Service's hub handles about 5,000 parcels per hour. Both companies forecast a large growth in traffic over the next several years as trade with China and other Far East countries increases and plan to expand their Anchorage facilities comparatively. The United States Postal Service also operates a large sectional center facility (SCF) for the 995xx ZIP Codes. It processes mail and parcels headed to and from all Alaska cities. 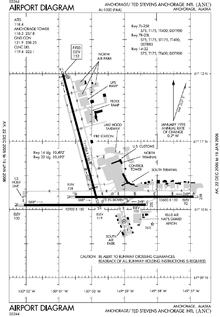 The South terminal contains 3 concourses: Concourse A, Concourse B, and Concourse C. Concourse C was completely rebuilt in 2004, design by McCool Carlson Green Architects, while Concourses A and B were built in 1985 and 1969 respectively and renovated in 2009.[21] Architects HNTB and RIM Architects performed the architectural work for A/B Concourse.[22] The north terminal also contains two L gates, numbered L1 and L2. These gates are outside security on the lower level and adjacent to Concourse A.

The North Terminal (international), design by McCool Carlson Green Architects, serves Condor, Japan Airlines, Korean Air, Icelandair, Yakutia Airlines, all international seasonal charter flights and military flights. In addition to these airlines, a few cargo airlines use the north side of the terminal for parking while their aircraft have small problems need maintenance for a day or so. This terminal was built in 1982.[21]

Roughly fifty destinations are accessible from ANC via nonstop or direct flights, including destinations in 14 U.S. states and the countries of Canada, Germany, Iceland, and Russia. U.S. mainline carriers operate a combination of year-round and seasonal service to the lower 48 states and Hawaii. Foreign carriers operate seasonal flights and seasonal charters to Asia and Europe, sold as bundled services.[23]

^1 Condor and Icelandair both arrive in the North Terminal.

A shuttle bus runs approximately every 15 minutes between the North and South terminals and the employee and long-term parking lots. A land-side inter-terminal walkway was completed in 2009. Air-side connections between the sterile areas of each terminal are not available.

Route 7A of the Anchorage People Mover bus system serves the airport's North and South terminals once every hour in each direction, connecting it with the downtown Transit Center and the Dimond Center mall.[26][27]

There is a rail station for the Alaska Railroad. It is only available during summer season for cruise ship service only.

Renovations began on the A and B concourses in fall 2006. These renovations are designed to bring the older portions into compliance with current seismic, heating, ventilation, electrical and safety codes, and also include new baggage handling systems and renovations to the interior of the concourses.[30] Since the completion of the construction, all domestic flights are operated out of the South Terminal.

The piece consists of nine towers of glass, collectively adding up to 42 meters (130 ft) of in span and reaching to 8 meters (26 ft) at its highest point. The series of panels are inspired by Alaska's immensely rugged landscape of glaciers and mountains. The ambiguous images embedded within the sculpture address Alaska's continual balancing of the forces of technology with the vast powers of the natural world.

The airport features an innovative customer service program, which partners with most on-site (and some nearby) vendors and concessionaires and aims to promote a positive image of the airport and the State of Alaska in the minds of travelers. This volunteer, self-funded committee mystery shops at partnering companies and provides awards of cash, free covered parking, and donated prizes to winning employees.[31][32][33]