Juneau International Airport (IATA: JNU, ICAO: PAJN, FAA LID: JNU) is a city owned, public use airport and seaplane base located seven nautical miles (8 mi, 13 km) northwest of the central business district of Juneau,[1] a city and borough in the U.S. state of Alaska which has no direct road access to the outside world. The airport serves as a regional hub for all air travel, from bush carriers to a major U.S. air carrier, Alaska Airlines. Another major air carrier, Delta Air Lines, also operates flights with mainline jet aircraft from the airport although this service is seasonal in nature.[2]

During World War II, Juneau Airport was used by the United States Army Air Forces as a transport link between the combat bases being established in the Aleutians and airfields in the Continental United States. It was also used by Air Transport Command and facilitated the transport of Lend-Lease aircraft to the Soviet Union via Nome (Marks Army Airfield).[6]

Pan American World Airways (Pan Am) was one of the first major airlines to serve Juneau. In 1947, Pan Am was operating daily Douglas DC-4 propliner service to Seattle via a stop at the Annette Island Airport which served Ketchikan at the time and also flew DC-4 service twice a week nonstop to Whitehorse in the Yukon Territory of Canada with continuing, no change of plane service to Fairbanks, Galena and Nome in Alaska.[7] Pan Am later operated Douglas DC-6B and Boeing 377 Stratocruiser aircraft into the airport.[8] During the 1950s, Pacific Northern Airlines served the airport with Douglas DC-4 and Lockheed Constellation propliners with daily service to Seattle via a stop at Annette Island as well as nonstop to Anchorage and Yakutat and direct to Cordova in Alaska.[9]

The jet age arrived in Juneau during the early 1960s. In 1963, Pan Am was operating daily Boeing 707 jetliner flights to Seattle via a stop at Annette Island.[10] By 1965, Pacific Northern was operating Boeing 720 jets nonstop to Seattle, Anchorage and Annette Island.[11] In 1967, Pacific Northern was acquired by and merged into Western Airlines which continued to operate jet service into the airport.[12] By 1968, Western was operating daily nonstop Boeing 720B jet service to Seattle, Anchorage and Annette Island with one stop direct service to Los Angeles.[13] By 1969, Alaska Airlines was operating Boeing 727-100 jet service into the airport on a daily basis with a round trip routing of Seattle - Sitka - Juneau - Yakutat - Cordova - Anchorage - Unalakleet - Nome - Kotzebue.[14] Alaska Air has served Juneau for over 45 years and primarily operated Boeing 727-100, 727-200 and 737-200 jetliners into the airport (including the Boeing 737-200 passenger/freight Combi aircraft) in addition to Boeing 720 jetliners before switching to later model Boeing 737 jets.[15] Besides operating jet service into Juneau, Alaska Airlines also flew smaller prop and turboprop aircraft from the airport in the past including the Convair 240, de Havilland Canada DHC-6 Twin Otter and two versions of the Grumman Goose amphibian aircraft, being a piston powered model and a turboprop version with the latter being named the "Turbo-Goose" by the airline.[16] Alaska Airlines began serving Juneau during the late 1960s following its acquisition of two local air service carriers, Alaska Coastal Airlines, which was based in Juneau, and Cordova Airlines.

Other air carriers that served Juneau over the years included Wien Air Alaska and MarkAir which had both been based in Alaska. Western Airlines also returned to Juneau after ceasing service during the early 1970s.[17] In 1968, Wien was operating Fairchild F-27 turboprop flights into the airport three days a week on a routing of Juneau - Whitehorse - Fairbanks.[18] By 1977, Wien was flying Boeing 737-200 jet service twice a week from the airport on a routing of Juneau - Whitehorse - Fairbanks - Anchorage and by 1979 the airline was operating daily nonstop 737-200 jet flights to Seattle and Anchorage.[19][20] During the early and mid 1980s, Western was operating daily nonstop Boeing 727-200 service to Seattle.[21] Following its acquisition of and merger with Western in 1987, Delta Air Lines continued to serve Juneau with daily nonstop Boeing 727-200 flights to Seattle and direct, one stop service to Los Angeles into the early 1990s.[22] Delta subsequently ceased all service into the airport but has now returned to Juneau with flights operated on a seasonal basis. In 1995, MarkAir was operating daily nonstop Boeing 737-400 jet service to Seattle and Anchorage.[23] 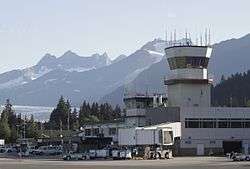 Closeup view of the airport's main terminal, including both older and newer control towers. Mendenhall Glacier is seen in the background.

Because of the extreme geography of Southeastern Alaska, land flat enough for airport facilities is at a premium. One of these few areas is the current location of the airport: the Mendenhall Wetlands State Game Refuge, a vastly diverse and ecologically critical region rich with plant life, small mammals, birds, several species of salmon, even black bears and bald eagles. The original airstrip was built in the 1930s, and no environmental impact analysis was performed at that time. The area currently housing the terminal and runways had to be filled in and part of the Gastineau Channel had to be dredged before the airport, in its current incarnation, could be built.

The airport is the only way in and out of the city, with exception of the Alaska Marine Highway and cargo ships traversing the Inside Passage. In the past, concerns have been raised over the safety of the airport, which is comparatively quite small, with the amount of air traffic it receives. In addition to frequent arrivals and departures from hubs such as Anchorage and Seattle/Tacoma, the airport also has daily and/or weekly service to smaller regional communities, a floatplane runway/docking area, and a heliport. Three major construction projects are planned at the airport within the next few years. An airport terminal renovation project will be the first comprehensive upgrade to the passenger facilities in over twenty years and will provide for better flow through the passenger screening process. The airfield maintenance facilities project will provide much needed room for storage and servicing of snow removal equipment. The runway safety area project will extend the runway at both ends and improve taxiways to meet Federal Aviation Administration requirements.

On September 4, 1971, Alaska Airlines Flight 1866, a Boeing 727-100, crashed into the easterly slope of a canyon in the Chilkat Range of the Tongass National Forest while on approach to Juneau International Airport. All 111 passengers and crew on board were killed. At the time it was the worst single airplane air disaster in United States history.[26]