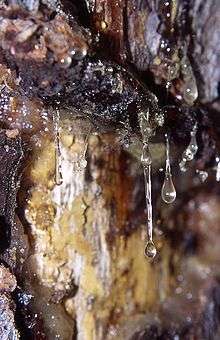 Many terpenes are derived commercially from conifer resins, such as those made by this pine.

Terpenes (/ˈtɜːrpiːn/) are a large and diverse class of organic compounds, produced by a variety of plants, particularly conifers,[1] though also by some insects such as termites or swallowtail butterflies, which emit terpenes from their osmeteria. They often have a strong odor and may protect the plants that produce them by deterring herbivores and by attracting predators and parasites of herbivores.[2] [3] The difference between terpenes and terpenoids is that terpenes are hydrocarbons, whereas terpenoids contain additional functional groups.

They are the major components of resin, and of turpentine produced from resin. The name "terpene" is derived from the word "turpentine". In addition to their roles as end-products in many organisms, terpenes are major biosynthetic building blocks within nearly every living creature. Steroids, for example, are derivatives of the triterpene squalene.

When terpenes are modified chemically, such as by oxidation or rearrangement of the carbon skeleton, the resulting compounds are generally referred to as terpenoids. Some authors will use the term terpene to include all terpenoids. Terpenoids are also known as isoprenoids.

Terpenes and terpenoids are the primary constituents of the essential oils of many types of plants and flowers. Essential oils are used widely as fragrances in perfumery, and in medicine and alternative medicines such as aromatherapy. Synthetic variations and derivatives of natural terpenes and terpenoids also greatly expand the variety of aromas used in perfumery and flavors used in food additives. Vitamin A is a terpene.

Terpenes are released by trees more actively in warmer weather, acting as a natural form of cloud seeding. The clouds reflect sunlight, allowing the forest to regulate its temperature.[4]

The aroma and flavor of hops, highly desirable in some beers, comes from terpenes. Of the terpenes in hops myrcene, β-pinene, β-caryophyllene, and α-humulene are found in the largest quantities.[5]

Terpenes are also major constituents of Cannabis sativa plants, which contain at least 120 identified compounds.[6] In addition to being responsible for the plant’s aroma, they can act synergistically with cannabinoids. In fact, there are several promising applications based on the combined use of cannabinoids and terpenes, such as new acne therapies utilizing CBD with the monoterpenes limonene, linalool, and pinene; new antiseptic agents with CBG and pinene; treatment of social anxiety disorder using CBD with limonene and linalool; and treatment of sleeping disorders by adding caryophyllene, linalool, and myrcene to 1:1 CBD/THC extracts.[6]

Isoprene itself does not undergo the building process, but rather activated forms, isopentenyl pyrophosphate (IPP or also isopentenyl diphosphate) and dimethylallyl pyrophosphate (DMAPP or also dimethylallyl diphosphate), are the components in the biosynthetic pathway. IPP is formed from acetyl-CoA via the intermediacy of mevalonic acid in the HMG-CoA reductase pathway. An alternative, totally unrelated biosynthesis pathway of IPP is known in some bacterial groups and the plastids of plants, the so-called MEP(2-Methyl-D-erythritol-4-phosphate)-pathway, which is initiated from C5-sugars. In both pathways, IPP is isomerized to DMAPP by the enzyme isopentenyl pyrophosphate isomerase.

As chains of isoprene units are built up, the resulting terpenes are classified sequentially by size as hemiterpenes, monoterpenes, sesquiterpenes, diterpenes, sesterterpenes, triterpenes, and tetraterpenes. Essentially, they are all synthesised by terpene synthase. 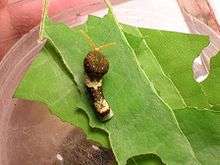 Second- or third-instar caterpillars of Papilio glaucus emit terpenes from their osmeterium.

A range of terpenes have been identified as high-value chemicals in food, cosmetic, pharmaceutical and biotechnology industries.[13][14] Chemical synthesis of terpenes can be problematic because of their complex structure, and plants produce very small amounts of these valuable chemicals, making it difficult, time-consuming and expensive to extract them directly from plants. Scientists are working to identify the key enzymes and pathways that produce terpenes in plants. In 2014, researchers at the John Innes Centre[15] searched the genomes of 17 plant species to find the genes that encode terpenoid synthase enzymes that give terpenes their basic structure, and cytochrome P450s that modify this basic structure.[16] Once genes have been identified for the synthesis pathway of a specific terpene, synthetic biology techniques could be used to make high levels of this terpene, using plants or microorganisms (e.g. yeast) as “factories”. This could mean cheaper and more sustainable production of economically and medicinally important terpenes. For example, a precursor to the terpene artemisinin, originally sourced from the plant Artemisia annua, can now be produced in yeast.[17]

Research into terpenes has found that many of them possess qualities that make them useful active ingredients as part of natural agricultural pesticides.[18]

Terpin hydrate is a derivative of turpentine. An expectorant and humectant, it is commonly used in the treatment of acute or chronic bronchitis and related conditions.

Terpenes are used by termites of the Nasutitermitinae family to attack enemy insects, through the use of a specialized mechanism called a fontanellar gun.[19]