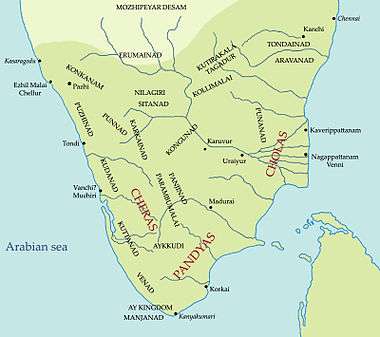 Tamiḻakam in the Sangam Period.

Tamiḻakam (Home of Tamil), (Tamil: தமிழகம், Tamiḻakam), refers to the geographical region inhabited by the ancient Tamil people. Tamilakam covered today Tamil Nadu, Kerala, Puducherry, Lakshadweep and southern parts of Andhra Pradesh and Karnataka. Traditional accounts and Tholkāppiyam referred these territories as a single cultural area, where Tamil was the natural language [note 1] and culture of all people.[note 2] The ancient Tamil country was divided into kingdoms. The best known among them were the Cheras, Cholas, Pandyans and Pallavas. Archaeological data from protohistoric Kerala and Tamil Nadu "appears to challenge the notion of a separate culture region".[3] During the Sangam period, Tamil culture began to spread outside Tamilakam.[4] Ancient Tamil settlements were also found in Sri Lanka (Sri Lankan Tamils) and the Maldives (Giravarus).

"Tamiḻakam" is a portmanteau of a word and suffix from the Tamil language, namely Tamiḻ and -akam. It can be roughly translated as the "homeland of the Tamils". According to Kamil Zvelebil, the term seems to be the most ancient term used to designate Tamil territory in the Indian subcontinent.[5] The Periplus of the Erythraean Sea referred it as Damirica.[6]

The word Tamilakam is today used as synonym for Tamil Nadu.

Until recently, the interpretation and understanding of India's past has largely been based on textual sources.[3] According to Abraham,

"In the southern portion of the peninsula – the region that corresponds roughly to the present-day states of Kerala and Tamil Nadu – the existence of a large documentary corpus, both indigenous and foreign, and the occurrence of inscribed coins and cave inscriptions, have given rise to the idea of a separate ethnic and linguistic region known as "Tamiḻakam"."[3]

The role of archaeology has often been secondary, as "a source of correlates for information gleaned from the texts",[3] but challenges existing notions of Tamiḻakam which are primarily based on textual sources.[3]

The second or first century BCE[7] Tamil chronicle, the Tholkāppiyam, a work on the grammar of the Tamil language and the earliest known extant work of Tamil literature, contains several references to Centamil nilam, which is translated as the "land of refined Tamils".[5] According to the Tholkāppiyam, the limits of Tamiḻakam were between the hills of Venkatam in the north and Kanyakumari in the south.[note 3] Tholkappiar, the writer of the Tholkāppiyam, doesn't mention a Tamil part of Sri Lanka.[38][note 4]

In the Tholkāppiyam, during this period of ancient Tamil country, there isn't any distinction between Malayalam and Tamil, conclusively said, Malayalam hasn't been in existence as a separate language and although it's said that the Tamil, was naturally spoken from the Eastern sea to the Western sea.[3][8][9][10][11][12]

Approximately during the period between 350 BCE to 200 CE, Tamiḻakam was ruled by the three Tamil dynasties: the Chola dynasty, the Pandyan dynasty and the Chera dynasty. There were also a few independent chieftains, the Velirs. During the time of the Maurya Empire in North India (c. 4th century BCE – 3rd century BCE) the Cheras, the Pandyas and the Cholas were in a late megalithic phase on the western coast of Tamiḻakam. The earliest datable references to the Tamil kingdoms are in inscriptions from the 3rd century BCE during the time of the Maurya Empire.

The Vealirs (Tamil: வேளிர் Vēḷir) were minor dynastic kings and aristocratic chieftains in Tamiḻakam in the early historic period of South India.[40][41]

There were three important political regions which were Chera Nadu,[43][44][45] Chola Nadu and Pandya Nadu.[42] Along these three there were two more political regions of Athiyaman Nadu (Sathyaputha) and Thamirabharani Nadu (Then Paandi) which were later on absorbed into Chera resp. Pandya Nadu by 3rd century BCE. Thondai Nadu which was under Chola Nadu, later emerged as independent Pallava Nadu by 6th century ADE.

Again Tamilakam resp. Perunadus was resp. were divided into 12 socio-geographical regions called Nadu or "country". Each of this Nadu had their own dialect of Tamil.[46]

Some other Nadus were also mentioned in Tamil literatures which weren't part of Tamilakam, but the countries traded with Tamils in ancient times.

Thapar mentions the existence of a common language of the Dravidian group:

Ashoka in his inscription refers to the peoples of South India as the Cholas, Cheras, Pandyas and Satiyaputras - the crucible of the culture of Tamiḻakam - called thus from the predominant language of the Dravidian group at the time, Tamil.[1]

Yet, also according to Abraham,

... the archaeological data from protohistoric Kerala and Tamil Nadu is not so clear-cut and, in fact, appears to challenge the very notion of a separate culture region.[3]

With the advent of the early historical period in South India[4] and the ascent of the three Tamil kingdoms in South India in the 3rd century BCE,[4] Tamil culture began to spread outside Tamiḻakam. In the 3rd century BCE, the first Tamil settlers arrived in Sri Lanka.[55] The Annaicoddai seal, dated to the 3rd century BCE, contains a bilingual inscription in Tamil-Brahmi.[56][note 5] Excavations in the area of Tissamaharama in southern Sri Lanka have unearthed locally issued coins produced between the second century BCE and the second century CE, some of which carry local Tamil personal names written in early Tamil letters,[57] which suggest that local Tamil merchants were present and actively involved in trade along the southern coast of Sri Lanka by the late classical period.[58] Around 237 BCE, "two adventurers from southern India"[59] established the first Tamil rule at Sri Lanka. In 145 BCE Elara, a Chola general[59] or prince known as Ellāḷaṉ[60] took over the throne at Anuradhapura and ruled for forty-four years.[59] Dutugamunu, a Sinhalese, started a war against him, defeated him, and took over the throne.[59][61]

Jains, Buddhists and Hindus have coexisted in Tamil country for at least as early as the second century BCE.[62]

The Nagas of Sri Lanka

The Yakshas and the Nagas are depicted in the Pali epic Mahavamsa as the early inhabitants of the island when Vijaya arrived in the island in 500 B.C.[64][note 6] According to Manogaran, some scholars also "have postulated that the Yakshas and Nagas [...] are the aboriginal tribes of Sri Lanka".[63] Holt concludes that they were not Tamils, but a distinct group.[67][note 7] Other scholars consider the Nagas as a Tamil group due to their snake worshipping which is a dravidian custom.[69] The Naga custom is still visible in Sri Lankan Tamil Hindu worship.[70]