The Alternative (Danish: Alternativet) is a green political party in Denmark. The party was publicly launched on 27 November 2013 by former Minister of Culture Uffe Elbæk and Josephine Fock, both of whom had been Members of Parliament for the Social Liberal Party.[3][4] 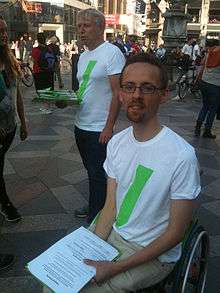 On 17 September 2013, Uffe Elbæk announced that he had left the Social Liberal Party.[5] During this time, Elbæk prepared for founding a new party. Two months later, The Alternative was publicly launched by Uffe Elbæk and Josephine Fock at a press conference at Christiansborg Palace, the seat of the Danish Parliament, Folketinget.[6]

The party’s name was approved by the Danish Electoral Commission under the Ministry of Economy and the Interior, taking effect on 18 December 2013.[7] In the beginning of 2015 the party worked on gathering the 20,260 signatures required to run for Parliament, which it succeeded in doing on 23 February 2015.[8] The party aims to crowdsource policies through what it calls "political laboratories".[9]

The party obtained ballot access for the 2015 general election with the letter Å on the electoral lists on 13 March 2015.[10] The party supported the re-election of Social Democrat leader Helle Thorning-Schmidt as Prime Minister.[11]

In the 2015 general election on 18 June 2015, The Alternative received 4.8% of the vote, electing 9 deputies. The sixth-largest party in Denmark by political representation,[12] the party is part of the opposition to the second government of Lars Løkke Rasmussen.

The members of Parliament from 2015 and their spokesperson assignments: