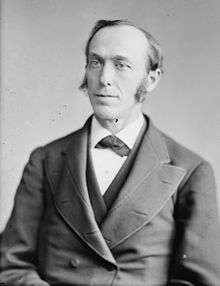 Thomas Collier Platt (July 15, 1833 – March 6, 1910) was a two-term member of the U.S. House of Representatives (1873–1877) and a three-term U.S. Senator from New York in the years 1881, 1897 to 1909—is best known as the "political boss" of the Republican Party in New York State in the late 19th century and early 20th century.[1] Upon his death, the New York Times stated that "no man ever exercised less influence in the Senate or the House of Representatives than he," but "no man ever exercised more power as a political leader."[2] He considered himself the "political godfather" of many Republican governors of the state, including Theodore Roosevelt.[3]

Platt played a key role in the creation of the City of Greater New York, which incorporated together the boroughs of New York (Manhattan), Kings (Brooklyn), Queens, Richmond (Staten Island) and Bronx counties.

William Platt, a successful attorney and strict Presbyterian, encouraged his son to enter the ministry. Accordingly, the young Platt was prepared for college at the Owego Academy and attended Yale College (1850–1852), where he studied theology, but failed to earn a degree. After leaving Yale in 1852, he entered into a variety of employments. He started out as a druggist (a business in which he was engaged for two decades), was briefly an editor of a small newspaper, served as President of the Tioga National Bank, and was interested in the lumbering business in Michigan. He also acted as President of the Southern Central and other railways.

Platt became Secretary and a director of the United States Express Co. in 1879 and was elected President of the company in 1880. He was a member and President of the Board of Quarantine Commissioners of New York from 1880 to 1888. He was President of the Tennessee Coal & Iron Company for several years.

Two years after his first wife died in 1901, he married Lillian Janeway, whom the New York Times described as "young enough in appearance to pass for his daughter."[6] Their "legal separation" was announced in 1906.[6] He died in New York City, March 6, 1910 and was interred in Evergreen Cemetery, Owego, N.Y. At the time of his death he remained married to Lillian, but she received nothing in his will.[5]

Platt's political involvement began at the Republican Party's inception; he made his first appearance in politics in 1856, in the presidential campaign of the party's first presidential candidate, John C. Fremont.[2] Running as a Republican, he was elected clerk of Tioga County, serving from 1859 to 1861. He was elected as a Republican to the Forty-third United States Congress and the Forty-fourth United States Congress, serving from March 4, 1873 to March 3, 1877. His influence on statewide politics began on his return from Congress in 1877, when he aligned with the "Stalwart" faction led by U.S. Senator Roscoe Conkling at the party's state convention, and against the "Half-Breed" faction loyal to President Rutherford B. Hayes.[2]

In January 1881 he was elected with the support of the Stalwart faction to represent New York in the United States Senate. He became a member of the Forty-seventh Congress and the chairman of the Committee on Enrolled Bills. However, he only served from March 4 to May 16, 1881, when he and Conkling resigned because of a disagreement with President James Garfield over federal appointments in New York. (Platt resigned at Conkling's insistence, earning him the nickname of "Me Too" Platt.) The immediate occasion of their resignation was Garfield's appointment of Half-Breed faction leader William H. Robertson as Collector of the Port of New York. Soon thereafter, however, Garfield's assassination by Charles J. Guiteau, a self-proclaimed Stalwart who claimed friendships with Platt and Conkling, was the finishing blow for their faction.[2] Platt and Conkling ran in the special election to fill the vacancies created by their own resignations, and lost.[2] Eschewing elective office, Platt then devoted his attention to mending fences and rebuilding the machine, which he then ran after 1887 as an "easy boss."[2]

On January 21, 1897, Platt's photograph appeared in the New York Tribune as "the first halftone reproduction to appear in a mass circulation daily paper," according to Time-Life's Photojournalism.

In order to increase his power as a political boss, Platt steered passage of the Greater New York bill in 1898. The bill incorporated the boroughs of Brooklyn, Queens, and Staten Island into the city, thereby creating New York City as it exists today.

Platt reluctantly supported Theodore Roosevelt's candidacy for Governor of New York in 1898, in the immediate aftermath of Roosevelt's fame leading the Rough-Riders in the Spanish–American War earlier that year. Once elected, Governor Roosevelt was independently minded, and crusaded against machines and corruption. In response, Platt sought a way to "shelve" Roosevelt so that a more compliant Governor could be installed in his place.[2] President William McKinley's original vice president had died in office, leaving a place on the ticket to fill before the 1900 election. At the 1900 Republican National Convention, Platt and President McKinley's political ally Mark Hanna proposed to get Roosevelt out of Platt's way in New York by nominating him for vice president.[2] Roosevelt was chosen by acclamation, played a major part in McKinley winning re-election, and became president in September 1901 after McKinley was assassinated in office.

Platt's control over the Republican Party in New York State effectively ended in 1902. Benjamin Barker Odell Jr., Roosevelt's successor as governor, had not only acted independently of Platt, but by 1902 insisted on taking over from Platt as leader of the party. After Platt tried, and failed, to block Odell's renomination as governor and Odell was re-elected, the era of a separate "boss" was over.[2]

Platt was a member of the New York Society of Colonial Wars.