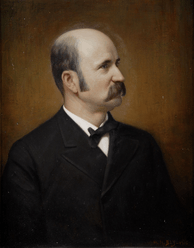 Gubernatorial portrait of David B. Hill.

On May 15, 1885, Hill signed "a bill establishing a 'Forest Preserve' of 715,000 acres that was to remain permanently 'as wild forest lands.'"[1] This tract soon became the Adirondack Park.

During his tenure as governor, William Kemmler was executed in the electric chair, the first inmate in the country ever to be put to death in this manner. On April 23, 1889, Hill vetoed a bill from the state legislature that would block the street construction at the Polo Grounds. He also vetoed two times (1888 and 1889) a ballot reform bill by the Republican legislature to stop the rife election fraud in New York.[2]

He was a U.S. Senator from New York from 1892 to 1897. He was elected in February 1891, but took his seat only after the end of his term as governor in January 1892. He was also a candidate for the Democratic nomination for President in 1892, but lost to Grover Cleveland, who later won the presidential election. He was defeated by Republican Levi P. Morton when, as a sitting U.S senator, he ran again for governor in November 1894. While Senator in 1893 and 1894 he blocked President Cleveland's two appointments to the U.S. Supreme Court: William B. Hornblower and Wheeler H. Peckham who had opposed Hill's political machine.

Hill died at Wolfert's Roost, his country home near Albany on October 20, 1910 from the effects of Bright's Disease and heart disease. He was buried in Montour Cemetery in Mountour Falls.