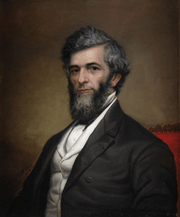 The son of a farmer, Fenton was born near Frewsburg, in Chautauqua County, New York. He was elected a colonel of the New York State Militia in 1840. He became a lumber merchant, but also studied law and was admitted to the bar in 1841.[1] Fenton entered politics as a Democrat. He was Town Supervisor of Carroll from 1843 to 1850.

He was elected as a Democrat to the 33rd United States Congress, and served from March 4, 1853, to March 3, 1855. In his first term in Congress, Fenton strongly opposed the Kansas-Nebraska Act of 1854 and unsuccessfully tried to persuade President Franklin Pierce and U.S. Secretary of State William L. Marcy to oppose the bill. He was defeated for re-election that year. He left the Democratic Party to help organize the Republican Party,[1] and was later elected, as a Republican, to the 35th, 36th, 37th and 38th United States Congresses, and served from 1857 to 1865.

He was Governor of New York from 1865 to 1868, elected in 1864 and 1866. In 1868, he was among the candidates to be Vice President but the nomination went eventually to Schuyler Colfax. In January 1869, he was elected a U.S. Senator from New York and served from 1869 to 1875. In 1872 he was among the Republicans opposed to President Ulysses S. Grant who joined the short-lived Liberal Republican Party.

Fenton (center) is among the conspiratorial Liberal Republicans in this Harper's Weekly cartoon of March 16, 1872.

In 1878, Fenton represented the United States at the international monetary conference in Paris. He was known as "The Soldiers' Friend" for his efforts to help returning Civil War veterans. He worked to remove tuition charges for public education, helped to establish six schools for training teachers, and signed the charter for Cornell University.

After his death, a building at The State University of New York at Fredonia, Fenton Hall, was named in his honor because he had attended the previous incarnation of the school, the Fredonia Academy.

His former home in Jamestown is the site of the Fenton History Center. It was listed on the National Register of Historic Places in 1972.[2]

Fenton Avenue in The Bronx, New York, is named for him.