Thyagaragar Temple is a Hindu temple dedicated to the deity Shiva, located in the town of Thiruvarur in Tamil Nadu, India. Shiva is worshiped as Moolanathar, and is represented by the lingam. Daily poojas are offered to his idol referred to as Maragatha lingam. His consort Parvathi is depicted as Kondi (கொண்டி). The presiding deity is revered in the 7th century Tamil Saiva canonical work, the Tevaram, written by Tamil saint poets known as the nayanars and classified as Paadal Petra Sthalam.

The temple complex covers 30 acres, and is one of the largest in India. It houses four gateway towers known as gopurams. The tallest is the eastern tower, with four stories and a height of 30 metres (98 ft). The temple has numerous shrines, with those of Thyagaragar (Veethi Vidangar) and Neelothbalambal (Alliyankothai) being the most prominent.

The temple has six daily rituals at various times from 5:30 a.m. to 10 p.m., and twelve yearly festivals on its calendar. The temple has the largest chariot in Tamil Nadu and the annual festival is celebrated during the month of April.

The present masonry structure was built during the Chola dynasty in the 9th century, while later expansions are attributed to Vijayanagar rulers of the Sangama Dynasty (1336–1485 CE), the Saluva Dynasty and the Tuluva Dynasty (1491–1570 CE). The temple is maintained and administered by the Hindu Religious and Endowment Board of the Government of Tamil Nadu.

The historic name of Thiruvarur was Aaroor (Arur) and it finds mention in the 7th century saiva canonical work, Tevaram.[1] The term Thiru is added to all temple cities that are mostly revered by the verses of Tevaram, which is the case of Arur becoming Thiruvarur. Another name of Thiruvarur is Kamalayaksetra, meaning the "holy place that is an abode of lotuses"; the town is also referred so due to the presence of the Kamalayayam tank and the temple deity, Kamalambigai.[2] During the British Raj, the town was termed Tiruvalur,[3] Tiruvaloor,[4] and Thiruvalur.[5] As per the district and municipality websites, the district has the spelling "Tiruvarur", while the town has it as "Thiruvarur".[6][7]

The temple dates back to the time of the Medieval Cholas.An inscription dated in the 20th regnal year of Rajendra I(1012–1044) beginning with introduction "Tirumanni valara" is found on the north and west walls of the Thyagaraja shrine.It gives a list of gifts including a number of jewels and lamps to the god veedhividankar(Thygarajar).It records that the temple was built in stone in the regnal years of the king by Anukkiyar Paravai Nangaiyar.Besides the same lady liberally endowed gold for plating and gilding parts of the vimana,the entrance and the four sides of the shrine.Copper was also donated for plating the doors, corbels of the pillars of the mandapa in front of the shrine.This inscription meticulously records the weight of the endowed gold and copper,besides listing the various ornaments gifted to the temple with description each of them.[8] The temple complex seems to have acted as the cultural model for the big Brahadeeswarar temple at Thanjavur of Rajaraja Chola I, wherein he enshrined a vitankar which shared with the Atavallan of Chidambaram the status of state cult. The last Chola monarch to play an important role in the affairs of the temple was Kulothunga Chola III in the early part of the 13th century A.D. It attracted saivas of all schools and was important centre of Golaki matha in the 13th and 14th century. It was also an important Jaina dwelling place, which was attacked by saivas, as is evident from Periya Puranam, account of life of tantiyadigal.[9] 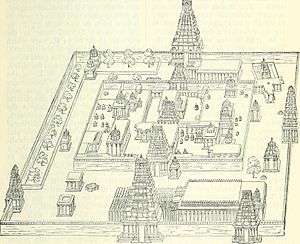 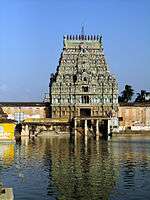 View of the temple tower from the Kamalalayam tank

The temples complex occupies an area of around 33 acres with the Kamalalayam tank to its west. There are numerous shrines and mandapas(halls) in the three spacious enclosures(prakaram). The two main shrines of the temple are for vanmikinathar (Lord Siva) and Thyagarajar. Of the two, the former is the most ancient, and derives its name from tha anthill(putru), which takes the place of linga in the main shrine. Appar, the 7th-century poet saint, refers to the main deity in his hymn as puttritrukondan(one who resides in the ant hill). The Stala vriksham(temple tree) is patiri(trumpet flower tree). The principles and practises of tree-worship and ophilotary are ancient bases whereupon a later date linga worship seems to have been established.[10]

Here all the 9 Navagrahams located towards south in straight line also located in northwest corner of 1st (prakaram). This temple hold the record of having maximum number of shrines (called sannithis in Tamil) in India. The foot of Thyagaraja is shown twice a year and on other occasions it is covered with flowers. The left leg of the deity is displayed during "panguniuthram" festival and right leg on "thiruvathirai". Some of the major shrines in the temple are of Aananthiswarar, Neelothmbal, Asaleswarar, Adageswarar, Varuneswarar, Annamalieswarar and Kamalambal.

The temple has a lot of halls, with six of them being the most prominent. Bhaktha Katchi hall is located to the left of the image of Moosukuntha Nandi. The festival image of Thyagaraja arrives at this hall after the Panguni Uthiram festival. Oonjal hall is located opposite to the Kabatha Katchi hall. The festival images of Chandrasekarar and Sekari Amman arrive at this hall during the Thiruvadhirai festival. Thulapara hall is named after the legend in which king Mucundaka placed Thyagaraja image of Thiruvarur in one and all others in another plate he received from Indra (the king of celestial deities). Purana hall is located in the northern part of the temple. Rajanarayana hall is a public hall for localities of Thiruvaru. Rajendra Chola hall, also called Sababathi hall houses the museum of the temple.[11]

Kulothunga Chola II (1133–50 CE) enlarged the temple ritual to have fifty six festivals, some of which are followed in modern times.[12][13] The annual chariot festival of the Thygarajaswamy temple is celebrated during April – May, correspondong to the Tamil month of Chitrai. The chariot is the largest of its kind in Asia and India weighing 300 tonne with a height of 90 feet. The chariot comes around the four main streets surrounding the temple during the festival. The event is attended by lakhs of people from all over Tamil Nadu. The chariot festival is followed by the "Theppam", meaning float festival.[14]

The Thyagarajar Temple at Tiruvarur is famous for the ajapa thanam(dance without chanting), that is executed by the deity itself. According to legend, a Chola king named Mucukunta obtained a boon from Indra(a celestial deity) and wished to receive an image of Thyagaraja Swamy(presiding deity, Shiva in the temple) reposing on the chest of reclining Lord Vishnu. Indra tried to misguide the king and had six other images made, but the king chose the right image at Tiruvarur. The other six images were installed in Thirukkuvalai, Nagapattinam, Tirukarayil, Tirukolili, Thirukkuvalai and Tirumaraikadu.[15] All the seven places are villages situated in the river Cauvery delta. All seven Thyagaraja images are said to dance when taken in procession(it is the bearers of the processional deity who actually dance). The temples with dance styles are regarded as Saptha Vidangam(seven dance moves)[16] and the related temples are as under:[17]

The temple priests perform the puja (rituals) during festivals and on a daily basis. Like other Shiva temples of Tamil Nadu, the priests belong to the Shaiva community, a Brahmin sub-caste. The temple rituals are performed six times a day; Ushathkalam at 5:30 a.m., Kalasanthi at 8:00 a.m., Uchikalam at 10:00 a.m., Sayarakshai at 5:00 p.m., Irandamkalam at 7:00 p.m. and Ardha Jamam at 8:00 p.m. Each ritual comprises four steps: abhisheka (sacred bath), alangaram (decoration), naivethanam (food offering) and deepa aradanai (waving of lamps) for both Vedaranyeswarar and Amman. The worship is held amidst music with nagaswaram (pipe instrument) and tavil (percussion instrument), religious instructions in the Vedas (sacred texts) read by priests and prostration by worshippers in front of the temple mast. There are weekly rituals like somavaram (Monday) and sukravaram (Friday), fortnightly rituals like pradosham and monthly festivals like amavasai (new moon day), kiruthigai, pournami (full moon day) and sathurthi.[18]

Historically, Thiruvarur has been a centre of eminent people in religion, arts and science. Sundarar, an 8th-century Saivite saint, mentions "I am the slave of all those born in Thiruvarur" in his works in Tevaram.[19] Two of the 63 nayanmars of Saivite tradition namely, Kalarsinga Nayanar and Tandiyadigal Nayanar were born in Thiruvarur.[13] The Periyapuranam, a 12th-century Saiva canonical by Sekkizhar, dedicates a chapter to those born in Thiruvarur, including these two saints. The town was a traditional centre of music and dance – the inscriptions from Rajaraja Chola associate a large body of dancers associated with the temple.[19] Thiruvarur is home to Trinity of Carnatic music, namely Thyagaraja (1767–1847 CE), Muthuswami Dikshitar (1775–1835 CE) and Shyama Shastri (1762–1827 CE).[20] Muthuswami Dikshitar has sung eulogies of the temple deities of the Thyagarajaswami temple.[19] There was large influx of the acumen of South Indian culture to the town during the 17th century CE due to the political unrest in Thanjavur and increased patronage of the Maratha kings to Thiruvarur, resulting in developments in music and dance.[21][22] A unique musical instrument called panchamuga vadyam with each of its five ends ornamented differently is used in the temple. A type of nadaswaram (pipe instrument) called Barinayanam is also a unique instrument found only in Thiruvarur.[22]

The Mahasamprokshanam also known as Kumbabishegam of the temple was held on 8 November 2015.[23]