This article is about a Temple tank. For other uses, see Tank (disambiguation). 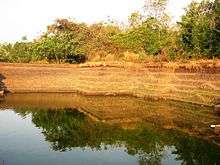 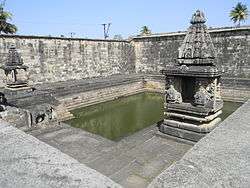 A temple tank at Chennakesava Temple in Belur, Karnataka

Temple tanks are wells or reservoirs built as part of the temple complex near Indian temples. They are called pushkarini, kalyani, kunda, sarovara, tirtha, talab, pukhuri, etc. in different languages and regions of India. Some tanks are said to cure various diseases and maladies when bathed in.[1] It is possible that these are cultural remnants of structures such as the Great Bath of Mohenjo-daro, which was part of the Indus Valley Civilization.

Since ancient times, the design of water storage has been important in India's temple architecture, especially in western India where dry and monsoon seasons alternate. Temple tank design became an art form in itself.[2] An example of the art of tank design is the large, geometically spectacular Stepped Tank at the Royal Center at the ruins of Vijayanagara, the capital of the Vijayanagara Empire, surrounding the modern town of Hampi. It is lined with green diorite and has no drain. It was filled by aqueduct.[3]

The tanks are used for ritual cleansing and during rites of consecration. The water in the tank is deemed to be sacred water from the Ganges River.[4]

In India, a stepwell is a deep masonry well with steps going down to the water level in the well. It is called a vav in west India and a baoli in north India. Some were built by kings and were richly ornamented.[5] They often were built by nobility, some being for secular use from which anyone could obtain water.[6]

Haridra Nadhi is the largest temple tank in India, maybe in the world. It is in Mannargudi, Thiruvarur District of Tamil Nadu. It is the temple tank of one of the largest Hindu temples, the Rajagopalaswamy Temple, Mannargudi. 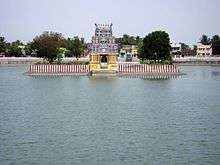 It is also called as Daughter of Kaveri river.

These wells were typically built near Hindu temples to accommodate bathing and cleansing activities before prayer. They are also used for immersion of Ganesha idols during Ganesha Chaturthi. 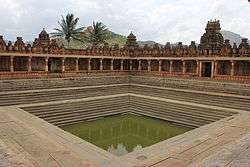