For the modern headwear known as a "tuque", see Knit cap. For other uses, see Toque (disambiguation). 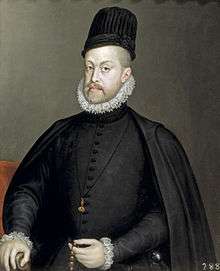 They were popular from the 13th to the 16th century in Europe, especially France. Now it is primarily known as the traditional headgear for professional cooks, except in Canada where the term is primarily used for knit caps.[2] 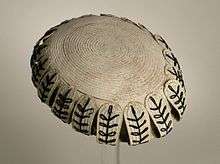 Woman's toque from England, c. 1860 at the collection of Los Angeles County Museum of Art

The word toque is Breton for "hat". The spelling with the "que" is Middle Breton, and Modern Breton is spelled tok. Old Breton spells the word toc. The word was borrowed into the French language both for the chef's uniform and the knit cap.

The word toque is Arabic "طوق" for "round" and "طاقية" "taqia" for "hat" originally for something "round" that has an opening. The word has been known in English since 1505. It came through the Medieval French toque (15th century), presumably by the way of the Spanish toca "woman's headdress", from Arabic *taqa 'طاقة' for "opening".[3] 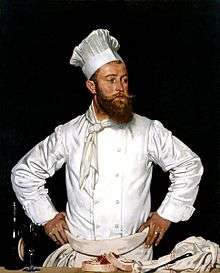 A toque blanche (French for "white hat"), often shortened to toque, is a tall, round, pleated, starched white hat worn by chefs.[4]

The toque most likely originated as the result of the gradual evolution of head coverings worn by cooks throughout the centuries.[5] Their roots are sometimes traced to the casque à meche (stocking cap) worn by 18th-century French chefs. The colour of the casque à meche denoted the rank of the wearer. Boucher, the personal chef of the French statesman Talleyrand, was the first to insist on white toques for sanitary reasons.

The modern toque is popularly believed to have originated with the French chefs Marie-Antoine Carême (1784–1833) and Auguste Escoffier (1846–1935).

The pleated, low, round hat worn in French universities – the equivalent of the mortarboard or tam at British and American universities – is also called a toque.

Toque is also used for a hard-type hat or helmet, worn for riding, especially in equestrian sports, often black and covered with black velvet. 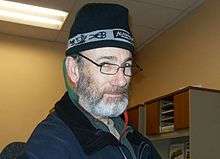 In Canada, tuque /ˈtuːk/ is the common name for a knitted winter hat, or watch cap (sometimes called a beanie in other parts of the world); the spelling "touque", although not recognized by the Canadian Oxford Dictionary, is also sometimes seen in written English.[6] The Canadian-English term was assimilated from Canadian-French tuque. Toque first appeared in writing around 1870.[7][8][9]

The fashion is said to have originated with the coureurs de bois, French and Métis fur traders, who kept their woollen nightcaps on for warmth during cold winter days. Such hats are known in other English-speaking countries by a variety of names, including beanie, watch cap or stocking cap; the terms tuque and toque are unique to Canada and northern areas of the United States close to the Canada–United States border.