This article is about the headgear. For other uses, see Chapeau (disambiguation). 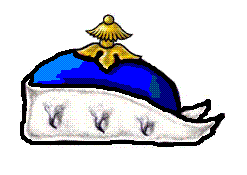 "Chapeau" is a French term signifying a hat or other covering for the head. In mainland European heraldry, it is used as a mark of ecclesiastical dignity, especially that of cardinals, which is called the red chapeau. It is worn over the shield by way of crest, as mitres and coronets are.

A chapeau is flat, very narrow atop, but with a broad brim, adorned with long silken strings interlaced; suspended from within with rows of tassels, called by the Italians fiocchi, increasing in number as they come lower. The hat was given to them by Innocent IV in 1250, but was not used in arms till the year 1300. Until that time, the cardinals were represented with mitres.

Archbishops and patriarchs bore a green hat, with four rows of tassels; bishops wore the same color, but with three; abbots and apostolical prothonotaries with two. The chapeau is also sometimes used as a mark of secular dignity, such as a cap, or coronet armed with ermine, worn by dukes, etc.

The crest is borne on the chapeau; and by the chapeau the crest and coat are separated; it being a rule that no crest must touch the shield immediately. 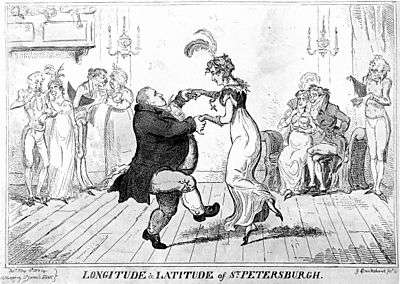 Some forms of bicorne were designed to be folded flat, so that they could be conveniently tucked underneath the arm when not being worn. A bicorne of this style is also known as a chapeau-bras or chapeau-de-bras (literally "arm-hat").

Chapeau! is often used as a generic expression of approval and appreciation in France and other parts of Europe: as a sign of admiration or respect, one shall indeed remove their hat.[1]

In the Anglophone heraldries, a "chapeau" or cap of maintenance is a specific kind of hat.[2] It occurs as a charge, but also more importantly as an exterior ornament, signifying rank.

The use of the chapeau in English heraldry is not as clear cut and regulated as in Scotland.