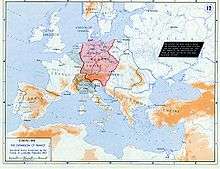 The Treaty of Lunéville was signed in the "Treaty house" of Lunéville on 9 February 1801. The signatory parties were the French Republic and Holy Roman Emperor Francis II, who was negotiating on his own behalf as ruler of the hereditary domains of the Habsburg Monarchy and also on behalf of the other rulers who controlled territories within the Holy Roman Empire. Joseph Bonaparte signed for France, whereas Count Ludwig von Cobenzl, the Austrian foreign minister, signed for the Emperor.

The Austrian army had been defeated by Napoleon Bonaparte at the Battle of Marengo on 14 June 1800 and then by Jean Victor Moreau at the Battle of Hohenlinden on 3 December. Forced to sue for peace, the Austrians signed another in a series of humiliating treaties. This treaty (along with the Treaty of Amiens of 1802) marked the end of the Second Coalition against Napoleon. After this treaty, Great Britain was the sole nation still at war with France, but only for another year. 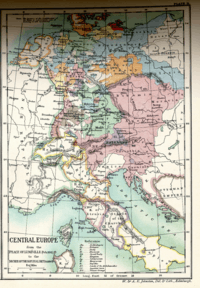 The Treaty of Lunéville declared that "there shall be, henceforth and forever, peace, amity, and good understanding" among the parties. The treaty required Austria to enforce the conditions of the earlier Treaty of Campo Formio (concluded on 17 October 1797). Certain Austrian holdings within the borders of the Holy Roman Empire were relinquished, and French control was extended to the left bank of the Rhine, "in complete sovereignty", although France renounced any claim to territories east of the Rhine. Contested boundaries in Italy were set. The Grand Duchy of Tuscany was awarded to the French, but the Grand Duke of Tuscany, Ferdinand III, was promised territorial compensations in Germany. In a secret article, these compensations were tentatively set to be the Archbishopric of Salzburg and Berchtesgaden.[1] The two parties agreed to respect the independence of the Batavian, Cisalpine, Helvetic and Ligurian Republics. On the other hand, Austria's possession of Venetia (as well as the Dalmatian coast) was confirmed.

The Austrians resumed war against France in 1805.