A Yemoja devotee in Nigeria

The Yoruba religion, comprising the traditional religious concepts and practices of the Yoruba people, is found primarily in southwestern Nigeria and the adjoining parts of Benin, and Togo, commonly known as Yorubaland. Yoruba religion is ancestral to the American religions Santería, Umbanda, Candomblé, and Vodou.[1] Yoruba religious beliefs are part of itan, the complex cultural concepts which make up the Yoruba society.[1][2][3] 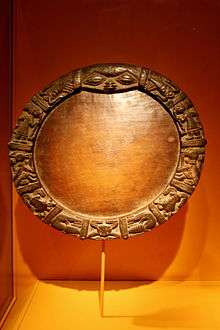 According to Kola Abimbola, the Yoruba have evolved a robust cosmology.[1] In brief, it holds that all human beings possess what is known as "Ayanmo"[4] (destiny, fate) and are expected to eventually become one in spirit with Olodumare (Olorun, the divine creator and source of all energy). Furthermore, the thoughts and actions of each person in Ayé (the physical realm/Life) interact with all other living things, including the Earth itself.[2]

Each person attempts to achieve transcendence and find their destiny in Orun-Rere (the spiritual realm of those who do good and beneficial things). One's ori-inu (spiritual consciousness in the physical realm) must grow in order to consummate union with one's "Iponri" (Ori Orun, spiritual self).[4]

Those who stop growing spiritually, in any of their given lives, are destined for "Orun-Apadi" (the invisible realm of potsherds). Life and death are said to be cycles of existence in a series of physical bodies while one's spirit evolves toward transcendence. This evolution is said to be most evident amongst the Orishas, the divine viziers of Olorun.

Iwapẹlẹ (or well-balanced) meditative recitation and sincere veneration is sufficient to strengthen the ori-inu of most people.[2][4] Well-balanced people, it is believed, are able to make positive use of the simplest form of connection between their Oris and the omnipotent Olu-Orun: an adura (petition or prayer) for divine support.

Prayer to one's Ori Orun produces an immediate sensation of joy. Elegbara (Eshu, not the divine messenger but accuser of the righteous) initiates contact with spiritual realm on behalf of the petitioner, and transmits the prayer to Ayé; the deliverer of ase or the spark of life. He transmits this prayer without distorting it in any way. Thereafter, the petitioner may be satisfied with a personal answer. In the event that he or she is not, the Ifá oracle of the Orisha Orunmila may also be consulted. All communication with Orun, whether simplistic in the form of a personal prayer or complicated in the form of that done by an initiated Babalawo (priest of divination), however, is energized by invoking ase.

In the Yoruba belief system, Olodumare has ase over all that is, and hence Is considered supreme.[2]

Olodumare is the most important "state of existence".[5] Regarded as being all-encompassing, no gender can be assigned. Hence, it is common to hear references to "it" or "they" (although this is meant to address a somewhat singularity). "They" are the owner of all heads, for during human creation, Olodumare gave "emi" (the breath of life) to humankind. In this, Olodumare is Supreme.[5]

Perhaps one of the most important human endeavors extolled within the Yoruba literary corpus is the quest to better one's "Iwa" (character, behaviour). In this way the teachings transcends religious doctrine, advising as it does that a person must also better his civic, social and intellectual spheres of being; every stanza of the sacred Ifá oracular poetry (Odu Ifa) has a portion covering the importance of "Iwa". Central to this is the theme of righteousness, both individual and collective.[6]

The Yoruba regard Olodumare as the principal agent of creation.

According to a Yoruba account of creation, during a certain stage in this process, the "truth" was sent to confirm the habitability of the newly formed planets. The earth being one of these was visited but deemed too wet for conventional life.

After a successful period of time, a number of divinities led by Obatala were sent to accomplish the task of helping earth develop its crust. On one of their visits to the realm, the arch-divinity Obatala took to the stage equipped with a mollusk that concealed some form of soil; winged beasts and some cloth like material. The contents were emptied onto what soon became a large mound on the surface of the water and soon after, the winged-beasts began to scatter this around until the point where it gradually made into a large patch of dry land; the various indentations they created eventually becoming hills and valleys.[5]

Obatala leaped onto a high-ground and named the place Ife. The land became fertile and plant life began to flourish. From handfuls of earth he began to mold figurines. Meanwhile, as this was happening on earth, Olodumare gathered the gasses from the far reaches of space and sparked an explosion that shaped into a fireball. He subsequently sent it to Ife, where it dried much of the land and simultaneously began to bake the motionless figurines. It was at this point that Olodumare released the "breath of life" to blow across the land, and the figurines slowly came into "being" as the first people of Ife.[5]

For this reason, Ife is locally referred to as "Ife Oodaye" - "cradle of existence".[5][7]

An Orisha (spelled Òrìṣa) is an entity that possesses the capability of reflecting some of the manifestations of Olodumare. Yoruba Orishas (commonly translated "unique/special/selected heads") are often described as intermediaries between humankind and the supernatural. The term is also translated as "Deities" or "Divinities" or "Gods".[8]

Orisha(s) are revered for having control over specific elements by nature, thus being better referred to as the divinities or Imole. Even so, there are those of their number that are more akin to ancient heroes and/or sages.[3] These are best addressed as Dema Deities. Even though the term Orisha is often used to describe both classes of divine entities, it is properly reserved for the former one.[3]

Irunmole are entities sent by Olorun to complete given tasks, often acting as liaisons between Orun (the invisible realm) and Aiye (the physical realm).[3] Irunmole(s) can best be described as ranking divinities; whereby such divinities are regarded as the principal Orishas. Irunmole, from "Erinrun" - 400, "Imole" - Divinites or Divine Spirits 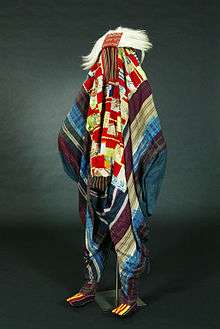 The Yoruba believe in Atunwa, reincarnation within the family. The names Babatunde (father returns), Yetunde (Mother returns), Babatunji (Father wakes once again) and Sotunde (The wise man returns) all offer vivid evidence of the Ifa concept of familial or lineal rebirth. There is no simple guarantee that your grandfather or great uncle will "come back" in the birth of your child, however.

Whenever the time arrives for a spirit to return to Earth (otherwise known as The Marketplace) through the conception of a new life in the direct bloodline of the family, one of the component entities of a person's being returns, while the other remains in Heaven (Ikole Orun). The spirit that returns does so in the form of a Guardian Ori. One's Guardian Ori, which is represented and contained in the crown of the head, represents not only the spirit and energy of one's previous blood relative, but the accumulated wisdom he or she has acquired through myriad lifetimes. This is not to be confused with one’s spiritual Ori, which contains personal destiny, but instead refers to the coming back to The Marketplace of one's personal blood Ori through one's new life and experiences.[10] The Primary Ancestor (which should be identified in your Itefa) becomes – if you are aware and work with that specific energy – a “guide” for the individual throughout their lifetime. At the end of that life they return to their identical spirit self and merge into one, taking the additional knowledge gained from their experience with the individual as a form of payment.

Yoruba religion around the world

According to Professor S. A. Akintoye, the Yoruba were exquisite statesmen who spread across the globe in an unprecedented fashion;[11] the reach of their culture is largely due to migration—the most recent migration occurred with the Atlantic slave trade. During this period, many Yoruba were captured and sold into the slave trade and transported to Argentina, Brazil, Cuba, Colombia, Dominican Republic, Puerto Rico, Trinidad and Tobago, Uruguay, Venezuela, and other parts of the Americas. With them, they carried their religious beliefs. The school-of-thought integrated into what now constitutes the core of the "New World lineages":[11][12][13][14]

The Vodun faith, which originated amongst a different ethnic group (the Gbe speaking peoples of present-day Benin, Togo, and Ghana), shares some similarities with the Yoruba faith, and may even be taken to be theologically related on some levels.[15]

"Chrislam" is a neologism used to refer to syncretism between Christianity and Islam among the Yoruba of Nigeria, mentioned by Greenfield (2001) as an example of the "Yoruba genius for syncretism". [16]

Yoruba "Chrislam" includes two distinct religious movements, one called Ifeoluwa founded by Tela Tella in the 1970s and 80s[17] and another called Oke-Tude founded by Samson Saka in 1999. They are also known as The Will of God Mission or The True Message of God Mission respectively.[18] Adherence to "Chrislam" in Nigeria is very limited; Soares (2009) notes that "such efforts towards religious fusion or synthesis seem to be rather exceptional and increasingly so. In many places there has been intense competition and higher levels of tension within and between different confessional groups."[19]

Ifeoluwa ("Love of God") recognises both the Bible and the Qur'an as holy texts, and practices "running deliverance," a distinctive practice of spiritual running likened to Joshua's army circling Jericho, or the practice of Pilgrims circumambulating a Church for Palm Sunday or the Kaaba, and Jews around the Synagogue during Sukkot. In contrast to other Chrislamic sects, Tela Tella, while claiming to believe in both the Qur'an and the Bible, says they are incomplete, and is writing his own book called the "Ifeoluwa Book".[20] Tela Tella claims that an angel of God came to him and told him that he gave him the mission and the name "Ifeoluwa: The Will of God Mission".[20]

Oke Tude (Oketude) in Ogudu (a northern suburb of Lagos), founded by Samson Saka in 1999, is slightly less recognisable to mainstream Christianity, resembling more interfaith worship with three different sessions or services that take place on Sunday. The first is a Muslim session, then a Christian session, and finally there is a joint session that Saka leads. During this he stresses the similarities between Christianity and Islamic beliefs.[20]