Emancipation Day is celebrated in many former British colonies in the Caribbean and areas of the United States on various dates in observance of the emancipation of enslaved people of African descent. It is also observed in other areas in regard to the abolition of serfdom or other forms of servitude.

The Slavery Abolition Act 1833, which abolished slavery throughout the British Empire (with the exceptions "of the Territories in the Possession of the East India Company", the "Island of Ceylon" and "the Island of Saint Helena"; the exceptions were eliminated in 1843), came into came into force the following year, on 1 August 1834. Only slaves below the age of six were freed. Former slaves over the age of six were redesignated as "apprentices" required to work, 40 hours per week without pay, as part of compensation payment to their former owners. Full emancipation was finally achieved at midnight on 31 July 1838.[1]

Emancipation Day in Barbados is part of the annual "Season of Emancipation", which began in 2005, the Season runs from April 14 to August 23.[2][3] Commemorations include:

Emancipation Day celebrations usually feature a Walk from Independence Square in Bridgetown to the Heritage Village at the Crop Over Bridgetown Market on the Spring Garden Highway. At the Heritage Village, in addition to a concert, there is a wreath-laying ceremony as a tribute to the ancestors. Traditionally, the Prime Minister, the Minister for Culture, and representatives of the Commission for Pan African Affairs are among those laying wreaths. 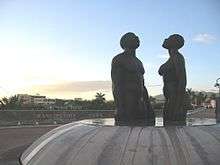 Emancipation Day is part of a week long cultural celebration in Jamaica, during this time Jamaicans also commemorate Jamaican Independence Day on August 6, 1962. Both August 1 and August 6 are public holidays. Emancipation Day had stopped being observed as a nation holiday in 1962 at the time of independence.[4] It was reinstated as a national public holiday under The Holidays (Public General) Act 1998 after a six-year campaign led by Rex Nettleford, among others.[3][5][6]

Traditionally people would keep at vigil on July 31 and at midnight ring church bell and play drums in parks and public squares to re-enact the first moments of freedom for enslaved Africans.[7] On Emancipation Day there is a reenactment of the reading of the Emancipation Declaration in town centres especially Spanish Town which was the seat of the Jamaican government when the Emancipation Act was passed in 1838.

On 1 August 1985 the Trinidad and Tobago became the first country in the world to declare a national holiday to commemorate the abolition of slavery.[10] It replaced Columbus Discovery Day, which commemorated the arrival of Christopher Columbus at Moruga on 31 July 1498, as a national public holiday.[11][12] The commemoration begins the night before with an all-night vigil and includes church services, street processions past historic landmarks and addresses from dignitaries including an address from the President of Trinidad and Tobago.[13]

Thursday before the first Monday in August

Some countries observe the holiday as "August Monday".

Puerto Rico celebrates Emancipation Day (Día de la Abolición de Esclavitud), an official holiday, on March 22. Slavery was abolished in Puerto Rico in 1873 while the island was still a colony of Spain.[15]

The Slavery Abolition Act 1833 ended slavery in the British Empire on August 1, 1834, and thus also in Canada. However, the first colony in the British Empire to abolish slavery was Upper Canada, now Ontario. John Graves Simcoe, the first Lieutenant Governor of Upper Canada (1791–1796), passed an Act Against Slavery in 1793, which led to the abolition of slavery in Upper Canada by 1810. It was superseded by the Slavery Abolition Act 1833.

While the date of the First August Monday holiday in Canada is historically linked to the abolition of slavery in the British Empire in 1834, not all of provinces commemorate the holiday as such.

In 2008, the Province of Ontario dedicated August 1 as "Emancipation Day"[19]

Toronto, the capital city of Ontario, also hosts the "Caribana" Celebration, which is held the first Monday in August. Started in 1967, it has become the largest Caribbean festival in North America. It is a two-week celebration, culminating in the long weekend with the Kings and Queens Festival, "Caribana" parade and Olympic Island activities.

Locally, the August Holiday in Toronto has been designated as "Simcoe Day" to commemorate Ontario's first Lieutenant Governor John Graves Simcoe, who approved legislation to abolish slavery in Upper Canada, now Ontario, the first jurisdiction in the British Empire to do so.

A crowd in Greenmarket Square, Cape Town, South Africa meets to celebrate Emancipation Day at midnight on the 1st December 2016.

On the 1st December is celebrated as Emancipation Day in South Africa most notably in the city of Cape Town.[22] 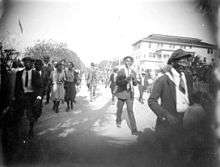 The state of Florida observes emancipation in a ceremonial day on May 20. In the capital, Tallahassee, Civil War reenactors playing the part of Major General Edward McCook and other union soldiers act out the speech General McCook gave from the steps of the Knott House on May 20, 1865.[23] This was the first reading of the Emancipation Proclamation in Florida.[24] 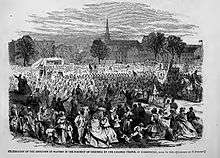 Celebrating aboliton of slavery in the District of Columbia, April 19, 1866

In Columbus, Mississippi, Emancipation Day is celebrated on May 8, known locally as "Eighth o' May". As in other southern states, the local celebration commemorates the date in 1865 when African Americans in eastern Mississippi learned of their freedom.

In Texas, Emancipation Day is celebrated on June 19. It commemorates the announcement in Texas of the abolition of slavery made on that day in 1865. It is commonly known as Juneteenth. Since the late 20th century, this date has gained recognition beyond Texas, and has been proposed for a national Emancipation Day.

Emancipation Day is celebrated on August 8 in Paducah, McCracken county and Russellville, Logan county Kentucky. According to the Paducah Sun newspaper, this is the anniversary of the day slaves in this region learned of their freedom in 1865.

The United States Virgin Islands celebrates Emancipation Day as an official holiday on July 3. It commemorates the abolition of slavery by Danish Governor Peter von Scholten on July 3, 1848.