For other forms, see Ratnapur (disambiguation).

Ratnapura (Sinhalese: රත්නපුර; Tamil: இரத்தினபுரி) ("City of Gems" in Sinhala and Tamil) is a major city in Sri Lanka. It is the capital city of Sabaragamuwa Province, as well as the Ratnapura District, and is a traditional centre for the Sri Lankan gem trade. It is located on the Kalu Ganga (Black River) in south-central Sri Lanka, some 101 km southeast of the country's capital, Colombo. Ratnapura is also spelled as Rathnapura.

The name 'Ratnapura' is a Sanskrit word meaning "city of gems", from the Sanskrit words pura (town) and ratna (gemstone).[1] Over 2000 years ago, when the first Buddhist monks arrived here from the north eastern provinces of India namely Bodh-Gaya, Varanasi and Pataliputra, they not only brought with them the Buddhist religion, but since their teachings were mainly in Sanskrit and Pali they also influenced the local language. While candy produced from the jaggery palm is traditionally known in this region as ratnapura, it is more likely that the candy was named for the locale rather than vice versa.[2]

It is the centre of a long-established industry of precious stone mining including rubies, sapphires, and other gems. Apart from gem mining, the city is known for the production of rice and fruit. Large plantations of tea and rubber surround the city. Tea grown in this region is called low-country tea. There is a well-established tourism industry in Ratnapura. Nearby Sinharaja Forest Reserve, Udawalawe National Park, Kitulgala, and Adam's Peak are especially popular among tourists.

In 1901, the town of Ratnapura had a population of 4,084, and by 2011, it had increased to 52,170, with Buddhists, Hindus, Christians and Muslims each constituting a significant portion of the population.

The city is ruled by a municipal council headed by a mayor. The council is elected by popular vote and has 15 seats. There were 29,159 registered voters in the 2006 local authorities elections.

The people of the town depends on the gem trade. Gem pits common site in the surrounding area. Most of the large-scale gem businessmen of Sri Lanka operate from Ratnapura. There are considerable numbers of foreign gem traders in the city too who have recognised the value of the gems found there. Among the foreign traders, Thai (Thailand) traders are in the majority. Every day, large number of traders from suburbs and other towns gather in the town centre to sell or buy gemstones. Large-scale merchants collect gemstones from locals and sell them in the international market. Some traders go out of the city to buy gems. This includes neighboring towns like Kalawana, Bogawantalawa, and Ela-era. After the discovery of world-class alluvial sapphire deposits in the valley of Ilakaka in Madagascar, many Ratnapura merchants travel out of the country to Madagascar to buy gems.

The city's agricultural industry is also well developed. Large plantations of tea and rubber surround the town. Although rice fields also used to be a common sight around the town, rice cultivation presently faces an uncertain future in Ratnapura because many farmers are giving up their rice cultivation and switching to gem mining which is a more productive way of earning money. If many farmers give up on agriculture, it would be harder for farmers to harvest enough food for them and to trade in the markets. Many delicious fruits (like mango and papaya) and vegetables are grown as market products.

Ratnapura city is located in the A4 Highway which connects capital Colombo to Kalmunai in the Eastern Province. Another Highway A8 connects the town with Panadura in the western coast of Sri Lanka. During the British occupation of the Island, narrow gauge train track was laid in 1912 connecting Colombo - Avissawella - Ratnapura - Opanayake however line Avissawella onwards removed in 1976. Thus reducing the mode of transportation to road. In 2006, construction started on a new broad gauge railway line to Rathnapura only. In 2014, the government gave approval to the  E06  Ruwanpura Expressway which will connect Rathnapura with Sri Lanka's Expressway Network.

Ratnapura features a tropical rainforest climate under the Köppen climate classification. The city is located in the south-western part of Sri Lanka, the so-called wet zone. The town receives rainfall mainly from south-western monsoons from May to September. During the remaining months of the year, there is also considerable precipitaion due to convective rains. The average annual precipitation is about 4,000 to 5,000 mm. The average temperature varies from 24 to 35 °C, and there are high humidity levels.The city is above 21m from sea level.

Much of the city of Ratnapura is situated in the flood plain of the Kalu River. As a result it experiences regular floods, usually during the month of May. There are no large-scale dams upstream on the Kalu to control Spring runoff. Proposals to reduce flood risk in the city have yet to reach the feasibility stage.[4] In May 2003, the town experienced the largest flood since the independence of Sri Lanka from Britain in 1947. 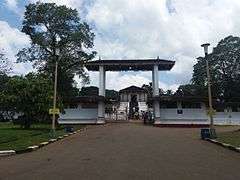 There are a number of places of worship in and around Ratnapura, including:

Ratnapura is the starting point for the 'classic' or hard route up Adam's Peak, via the Gilimale and Carney Estates. The pilgrimage season starts on Poya (full moon) day in December and runs until the start of the south-west monsoon in April. It has been a pilgrimage centre for over 1,000 years. King Parakramabahu and King Nissanka Malla of Polonnaruwa provided ambalamas or 'resting places' for weary pilgrims along the mountain route. The other more popular route is through Dalhousie (pronounced 'Del-house') close to Dickoya.

There are numerous gem mines located around the area, especially in paddy fields on lower ground. The mines are generally around 10 m (33 ft) to 50 m (160 ft) deep. Portable hand operating tools used for the mining process, include shovels, picks, pans (specially made from bamboo) and cradles. Once the soil is extracted from the mine, water is used to wash the dirt and mud away using pans and any gemstones, which heavier than normal stones, will remain at the bottom of the pan.

In the time of the Last king of Sri Lanka "Sri Vikrama Rajasinha", Ehelepola Nilame was sent to Sabaragamuwa (Ratnapura) as "Disawe" or local governor of Sabaragamuwa. He built a small reservoir and water canal to support local rice farms. The works of this hero are still visible around the Ratnapura area and local people benefiting from his works even today. His house which is situated in the middle of Ratnapura city is now being used as the national museum building.

The portrayal of Ehelepola as a hero is quite controversial. Once he conspired with British and betrayed the Kandy king. The King ordered the execution of his family unless Ehelepola surrendered to the king (according to the prevailing laws). He became a coward and he let king execute his whole family in Kandy. His younger son became a child hero by bravely facing death by guillotine, while his elder brother was hiding behind his mother (who was drowned).