This article is about the municipality in Limburg. For the town in South Holland, see Valkenburg, South Holland. 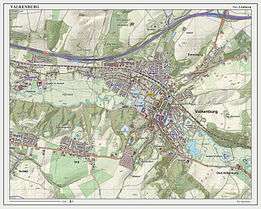 Topographic map of Valkenburg, as of March 2014 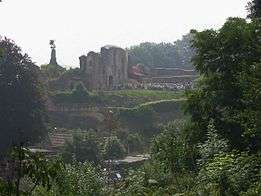 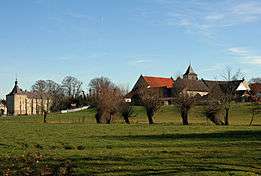 pronunciation ) (Limburgish: Valkeberg) is a municipality situated in the southeastern Dutch province of Limburg. The name refers to the central town in the municipality, Valkenburg, and the small river Geul.

Sieges and conquests have been the recurrent theme in the history of Valkenburg, especially in connection with Valkenburg castle, seat of the counts of Valkenburg (or Falkenburg). It was here that Beatrice of Falkenburg grew up, who, in 1269 at the age of 15, married 60-year-old Richard of Cornwall, king of the Holy Roman Empire. In December 1672 the castle was once again destroyed by Dutch troops led by William III, trying to prevent the armies of Louis XIV of France from capturing it, this time not to be rebuilt.

In the 19th century, because of the natural beauty of the area, Valkenburg became a sought-after holiday destination for the well-to-do in the Netherlands. Tourism developed, especially after in 1853 the railway from Maastricht to Heerlen and Aachen opened. Valkenburg railway station is the oldest surviving station in the Netherlands. In the beginning of the 20th century, well-known Dutch architect Pierre Cuypers lived in Valkenburg for several years. He helped develop tourism by designing a hotel, an open-air theater and a copy of the catacombs of Rome. Furthermore, he restored the medieval church and designed several tombs and a chapel in Gothic Revival style in a graveyard situated on Cauberg, a steep hill outside the town center.

During the Second World War Valkenburg was occupied by Nazi-Germany for four years, four months and one week. The town was liberated on 17 September 1944 by the American 30th Infantry Division. For an overview of the resistance movement in Valkenburg during the war, see Valkenburg resistance.

Valkenburg is no longer a fortified town but it has largely retained its historical charm, although the town suffered heavily from mass tourism in the 1960s, 70s and 80s. The municipality of Valkenburg aan de Geul still hosts more than 1 million overnight stays a year. The present aim of the council of Valkenburg is to move away from mass tourism and emphasize the natural and historical beauty of the town. In order to attract more "quality tourism" a plan was made called Vestingstad Valkenburg (Fortification Town Valkenburg). Included in the plan were the rebuilding of Geulpoort, a 14th-century city gate that was demolished along with the castle in the 17th century, the restoration of two other surviving city gates, and the reconstruction of the defensive moat along the Medieval wall in Halderpark. More or less simultaneously initiated was the redevelopment of the town's shopping district, to be finished in 2016.

These days Valkenburg is especially known for its many tourist attractions, its chalk houses (locally called mergel or marl) and the attractive hilly countryside. The main sight are:

Valkenburg is situated in a part of the Netherlands that is known for its natural beauty and many historical buildings. The area, although quite hilly, is perfectly suited for walks or (mountain) bike tours.

Castles and stately homes in Valkenburg

Valkenburg aan de Geul is served by the A79 motorway, this motorway runs from Maastricht to Heerlen.