This article is about the municipality and City in the Netherlands. For the Icelandic Óss rune, see Æsir. For other uses, see OSS (disambiguation).

Oss (Dutch: [ɔs]) is a municipality and a city in the southern Netherlands, in the province of North Brabant. 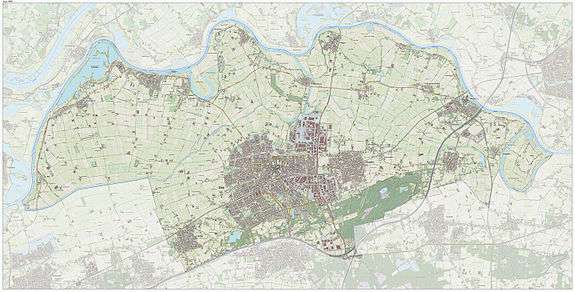 Oss has a shopping center with outlets including The Sting, Houtbrox, C&A, V&D and many more. The center has many squares. The only real shopping streets (also the best known) are the Heuvelstraat, Walstraat and the Peperstraat. The squares are connected with these shopping streets and passages. These passages also contain shops. One of the passages (The Passage, Dutch: de Passage, Local Dialect: 't Gengske) had an overhauling renovation in 2014. It now resembles an old Dutch street.

The city of Oss

There is archaeological evidence that humans have lived in and around Oss for 4,000 years. Major archaeological finds were the Vorstengraf burial sites and the indigenous-Roman burial fields of Oss-Ussen.[5]

Oss was first mentioned in a letter by Pope Alexander II on 6 May 1069. Oss was granted city rights in 1399 by Hertogin (Duchess) Johanna van Brabant. Present-day Oss has several chemical and pharmaceutical industries like Merck & Co. (previously Schering-Plough, Organon and Diosynth). Oss is also host to the professional football team FC Oss, and is the birthplace of former Manchester United and Real Madrid star Ruud van Nistelrooy, although he did not play for the local side, but for rivals FC Den Bosch.

The gothic metal/alternative rock band The Gathering, formed in 1989, originally hails from Oss.

Berghem is a small town east of Oss (population: 6,900). Berghem is currently being expanded with many new houses in the Piekenhoef.

Megen used to be the 'capital' of the county Megen (including Haren, Macharen and Teeffelen) that was founded around 1145. City rights were obtained in 1357. In 1810, the County Megen became a municipality to which Haren and Macharen also belonged. It became part of the municipality of Oss in 1994.

Ravenstein (population: 3,728) is a city and was a municipality until 2003, when it was added to the Oss municipality. The municipality covered an area of 42.68 km² and also included villages: Demen, Dennenburg, Deursen, Dieden, Herpen, Huisseling, Keent, Koolwijk, Neerlangel, Neerloon, Overlangel.