Founded in 1997, initially developing low-profile projects, the studio is now one of the largest in the world, with over 2,700 employees.[1] It is responsible for developing, among others, games in the Prince of Persia, Far Cry and Assassin's Creed series, as well as those in the Tom Clancy franchise and Watch Dogs. 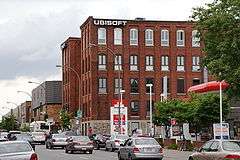 The studio was opened in 1997, with government funding. The parent company Ubisoft also cited Quebec's extensive French-speaking population, close relationship with France, and proximity to North American market as reasons for opening a studio there.[2] Martin Tremblay joined the studio as executive vice president in 1999, but was promoted to chief operating officer a year later.[3]

The history of Ubisoft Montreal goes back to the early 1990s. At that time, the manufacturing and textiles industries in Montreal were quickly disappearing, and therefore the political party in power at the time — the Parti Québécois (PQ) — had no choice but to find new sources of job creation. The PQ wanted Montreal to become a multimedia hub, since multimedia was considered a growing industry due to the rise in the number of people who owned computers, advancing technology, and the rise of the internet.[4]

By the early 1990s, Ubisoft was trying to expand into North America. They originally planned to open a subsidiary in New Brunswick. When Quebec lobbyist Sylvain Vaugeois heard about this, he proposed to the Quebec government, that they should get Ubisoft to open their subsidiary in Montreal instead of New Brunswick. He decided to have the government invest in the labour force by giving Ubisoft $25,000 per employee they hire in Montreal for the next five years, and called it "Plan Mercure". When he proposed the idea to the Quebec government, it received little support because they believed the project was too expensive to fund. Sylvain Vaugeois would then go to France to meet with Ubisoft's management to explain his idea (even though the government had no plans to go ahead with it). Ubisoft's management team loved it, and they then flew to Montreal, where they realized that Plan Mercure was not going to go into effect. At that point, the media got hold of it, and the PQ was blamed for letting a fast-growing industry slip out of their hands. The PQ then had no choice but to go ahead with Plan Mercure. The PQ's finance minister Bernard Landry then flew to Ottawa to meet with the Minister of Human Resources and Development at the time, Pierre Pettigrew, who agreed to subsidize the creation of 500 jobs over a five-year period. The Quebec government contributed $15,000 while the federal contributed $10,000 per employee. Ubisoft Montreal opened in 1997 and today employs over 2,100 employees in Montreal. The opening of Ubisoft Montreal was the first major video game publisher to set up in Montreal. Other factors that led to Ubisoft to choose Montreal over New Brunswick were Montreal's low rent, a highly educated French-speaking workforce, and Montreal's image as a creative city. The creation of Ubisoft Montreal paved the way for both the provincial and federal government to start subsidizing video game companies, and thus led to the influx of other video game companies such as EA, Eidos, THQ, Warner Bros. etc. setting up shop in Montreal.[5]

Ubisoft Montreal's decision to set up in an abandoned textiles factory in the Mile End district brought change to the city's landscape. With this decision, Mile End changed from a low rent area devoid of business to a cultural hub with many young professionals and other businesses locating there. The same thing has happened in Vancouver and Toronto where video game companies moved their offices in low rent areas, turning them into popular neighbourhoods. In Vancouver, when EA opened up EA Vancouver, it located in the Yaletown, transformed the area from an area of small businesses to a mix of both residential homes and offices, and has increased the location's population from 40,000 to 110,000. At the same time, when Ubisoft opened up in Toronto, they chose to open up in an industrial factory that was surrounded by fast-food restaurants; now there are high end condos (with units starting at $600,000) opening up across the street.[6]

Initially, the studio developed children's games such as Donald Duck: Goin' Quackers and games based on the Playmobil series of toys.[7] However, in 2000, the studio began work on a game called Tom Clancy's Splinter Cell.[8] Upon its release in November 2002, Splinter Cell was met with glowing reviews. IGN called the game "the best title on Xbox this year" and wrote in their review that it was "a game that will put the Ubi Soft Montreal development house on the map."[9]

In 2005, the government of Quebec gave Ubisoft 5 million dollars to expand.[10] That amount was later increased to 19 million dollars, and there are now plans to add 1,400 new employees by 2013, which would make Ubisoft Montreal the world's largest game development studio.[11]

During his time as COO, Martin Tremblay was a staunch supporter of non-compete clauses, in large part due to an incident in which Electronic Arts hired away several Ubisoft Montreal employees to the at the time newly opened EA Montreal studio.[12] Ironically, when Tremblay left Ubisoft in 2006 to become President of Worldwide Studios at Vivendi Games, he was prevented from taking the new position by a court order enforcing the non-compete clause in his Ubisoft contract.[13]