The 2002 House elections in Missouri occurred on November 5, 2002 to elect the members of the State of Missouri's delegation to the United States House of Representatives. Missouri had nine seats in the House, apportioned according to the 2000 United States Census. 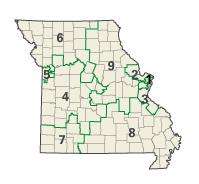 Missouri congressional districts in the 2002 elections

This article is issued from Wikipedia - version of the 2/7/2013. The text is available under the Creative Commons Attribution/Share Alike but additional terms may apply for the media files.