The 2016 United States presidential election in Missouri was held on November 8, 2016, as part of the 2016 General Election in which all 50 states plus The District of Columbia participated. Missouri voters chose electors to represent them in the Electoral College via a popular vote pitting the Republican Party's nominee, businessman Donald Trump, and running mate Indiana Governor Mike Pence against Democratic Party nominee, former Secretary of State Hillary Clinton and her running mate, Virginia Senator Tim Kaine.

On March 15, 2016, in the presidential primaries, voters expressed their preferences for the Democratic, Republican, and Libertarian parties' respective nominees for President. Voters could choose any one party's primary in which to vote.

Donald Trump won the election in Missouri with 57.1% of the vote. Hillary Clinton received 38.0% of the vote.[1] Trump's 19-point margin of victory in the state was more than double that of Mitt Romney's from 2012. Clinton carried only four jurisdictions: Boone County, home to Columbia and the University of Missouri; Jackson County, which includes most of Kansas City; St. Louis County; and St. Louis City. 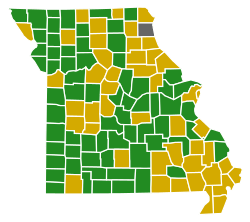 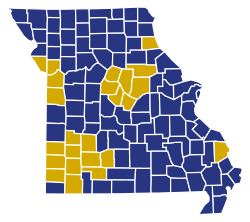 The Missouri primary ran on March 15, 2016, alongside those of the Republican, Democratic, and Constitution parties. 40% of the electorate voted to stand uncommitted to any candidate. Austin Petersen, running in his home state, finished second with 29% of the statewide vote, which was double that of Steve Kerbel from Colorado, who finished third with 14%. Petersen comfortably won the support of voters in the state's capital, Jefferson City, and its surrounding counties, but was fell heavily behind the uncommitted vote in the state's two largest cities, Kansas City and St. Louis. Kerbel won three counties around Springfield, while Marc Allan Feldman, Cecil Ince, and Rhett Smith all won a sprawl of counties across the state; in most of these counties, however, only a single vote was cast. No votes were cast for Libertarian Party candidates in the northwestern counties of Harrison, Holt, Mercer, and Worth.[3]

The Following have write-in Status: