The Missouri Democratic Presidential Primary took place on Super Tuesday, February 5, 2008, with 72 delegates at stake. The winner in each of Missouri's nine congressional districts was awarded all of that district's delegates, which totaled 47. Another 25 delegates were awarded to the statewide winner, Barack Obama. The 72 delegates represented Missouri at the Democratic National Convention in Denver, Colorado. Sixteen other unpledged delegates, known as superdelegates, also attended the convention and cast their votes as well. 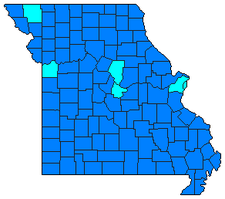 Clinton had a large initial lead as the rural precincts began reporting, leading several news groups to call the primary for her.[1] However, Obama rallied from behind as the numbers began to come in from the heavily African American precincts in and around St. Louis to win by just under 12,000 votes. The pledged delegates were evenly split between the two candidates. Geographically, Clinton won 109 of the 115 counties in the state, while Obama carried St. Louis, Kansas City and the areas around the college towns of Columbia and Maryville.

Clinton performed extremely well geographically all throughout the rest of the state, especially in the more rural parts of the state outside of Kansas City and St. Louis. She won the Kansas City Suburbs, including St. Joseph in Buchanan County and some of the St. Louis Exurbs, including St. Charles County. Her best performance in the state was in Southeast Missouri where eight counties gave her over 70 percent of the vote. This area of the state, most of which is a part of the 8th District in the U.S. Congress, is heavily Democratic at the local level as Democrats control all county offices in all but four of the 28 counties in the congressional district. It is also fairly Democratic-leaning at the state level, going handily to Governor Jay Nixon in the Missouri Gubernatorial Election of 2008, and while Southeast Missouri was won by Republicans George W. Bush and John McCain from 2000–2008, the region gave Bill Clinton one of his largest margins of victory in 1992 and 1996. The area has many of the demographics in Clinton’s favor – it is predominantly white and made up of working-class individuals who tend to be politically moderate on several issues. She also performed well in Southwest Missouri, the most conservative part of the state, in and around Springfield and Joplin. Northern Missouri also strongly backed Clinton.

U.S. Senator Claire McCaskill came out as an early endorser of Barack Obama as well, citing pressure from her younger daughter as the main reason why she decided to endorse him.