The 1996 United States elections were held on November 5. Democratic President Bill Clinton won re-election, while the Republicans maintained their majorities in both houses of the United States Congress.

Democratic incumbent President Bill Clinton won re-election, defeating Republican former Senator Bob Dole of Kansas. Billionaire and 1992 Independent Presidential candidate Ross Perot of Texas, the nominee of the newly founded Reform Party, though performing strongly for a third party candidate and receiving 8.4% of the vote, was unable to replicate, let alone improve upon, his performance from his 1992 campaign.

Despite the Democrats' strong performance in the Presidential election, Republicans would remain the majority party in the United States Congress and even expanded their majority in the Senate albeit that it would be abated by losses in the House. 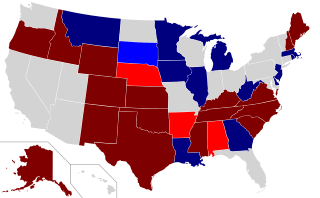 During the 1996 U.S. Senate elections, elections for all thirty-three regularly scheduled Class II Senate seats as well as special elections in Oregon and Kansas were held.

Republicans captured three seats in Alabama, Arkansas, and Nebraska, but lost two in Oregon (via a special election not held concurrently with the other Senate elections in November) and South Dakota.

During the 1996 House elections, all 435 seats in the House of Representatives as well as the seats of all non-voting Delegates from non-state districts were up for election that year.

Though Democrats made an effort to regain control of the House following massive defeats in 1994, which in the process of doing so resulted in a net gain of eight seats, Republicans retained their majority. This election was one of the few instances in U.S. Congressional election history in which the winning party lost the popular vote. 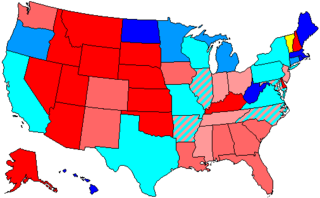 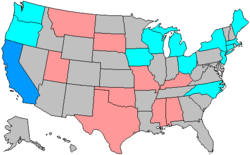 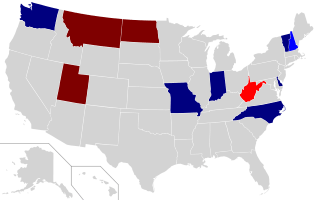 During the 1996 gubernatorial elections, the governorships of the eleven states and two territories were up for election.

Going into the elections, Republicans held the governorships of thirty-two states, Democrats held those of seventeen states, all territories, and the Mayorship of the District of Columbia, and one Governor was a member of neither party. Republicans won in West Virginia, but this was countered by a Democratic victory in New Hampshire. Thus, there was no net change in the balance of power.

In some states where the positions were elective offices, voters elected candidates for state executive branch offices (Lieutenant Governors (though some were elected on the same ticket as the gubernatorial nominee), Secretary of state, state Treasurer, state Auditor, state Attorney General, state Superintendent of Education, Commissioners of Insurance, Agriculture or, Labor, etc.) and state judicial branch offices (seats on state Supreme Courts and, in some states, state appellate courts).

Some major American cities held their mayoral elections in 1996.