Uppiliappan Temple, also known as Thiruvinnagar of Venkatachalapathy Temple is a temple dedicated to Hindu god Vishnu, located near Thirunageswaram, a village in the outskirts of the Kumbakonam in the South Indian state of Tamil Nadu. Constructed in Dravidian style of architecture, the temple is glorified in the Divya Prabandha, the early medieval Tamil canon of the Azhwar saints from the 6th–9th centuries AD. It is counted as the 60th among the 108 Divya Desams dedicated to Vishnu. Vishnu is worshiped as Uppiliappan and his consort Lakshmi as Bhumi Devi.

The temple is believed to be of significant antiquity and is believed to be initiated by the Medieval Cholas of the late 8th century AD, with later contributions at different times from Thanjavur Nayaks. The temple has two inscriptions dating from the Chola period. The temple has a five-tiered rajagopuram (gateway tower) and enshrined within a granite wall. The complex contains all the shrines and water bodies associated with it.

Uppiliappan is believed to have appeared for sage Markandeya and Hindu gods Bhoomadevi, Brahma and Shiva. The temple observes six daily rituals and three yearly festivals. The chariot festival, celebrated during the Tamil month of "Panguni"(March–April), is the most prominent festival of the temple. The temple is maintained and administered by the Hindu Religious and Endowment Board of the Government of Tamil Nadu. 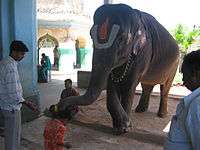 The history of the temple is mentioned in the Brahmanda Purana, one of the eighteen famed Hindu scriptures. As per Hindu legend, once Tulasi did penance to attain closeness to Vishnu. Vishnu gave a boon to the plant that his consort Lakshmi would appear under her lap in Tiruvinnagaram. Tulasi appeared in the place where the temple is located. This is mentioned in the 53rd verse of Nammazhwaar in Thiruviruththam. Markandeya Maharishi worshiped Vishnu and desired for the boon that Lakshmi should appear as his daughter and Vishnu himself should become his son-in-law. Once Markandeya was on a holy trip and after reaching Thiruvinnagaram, he felt that it was the right place for getting his desire fulfilled. Markandeya started a severe penance for thousand years seeking Lakshmi's blessings. Lakshmi appeared as a baby under the already incarnated tulasi plant. Markandeya felt the presence of Lakshmi as the incarnation in the form of the baby and realised that a part of his desire had been fulfilled. He took possession of the baby and raised her. When the young girl reached adolescent age, on the panguni month of Shravana, Vishnu appeared as an old man and asked for the hand of Markandeya's daughter in marriage. Markandeya replied that, "You are very ripe and old, my daughter is too young and she does not even know how to cook with proper salt contents" to which the old man replied, "If your daughter must cook without salt, then I will still take it as my best food, but I will not leave from here without marrying her". Markandeya sought the help of Vishnu and then realised using his penance that the old man was none other than Vishnu himself. When he opened his eyes, Vishnu appeared in front of him with conch and chakram as in Vaikundam. Markandeya offered his daughter's hand in marriage. As per the legend, the temple Neyvethiyam (food offering in the temple) is always prepared without salt in the food.

The name Oppiliappan is as result of this legend. There is also a story behind the tank in this temple. Once a King had consummated with a daughter of a saint and hence the saint cursed him to become a bird. The king lived as a bird and one night when there was a storm and the branch of the tree the bird was sleeping on broke and fell into the water of this tank. The bird which got dipped by this accident in the tank regained its original form as the King and since then this is known as the only theerththam that one can do theerth thaadanam even in the night. Since this tank has such a healing power in the day as well as night, it is called "Ahoraathra Pushkarani".[1][2][3][4][5] The place is referred by various names like "Agasa Nagaram", "Vaikunda Nagaram", "Thiruvinnagar", "Oppiliappan Sannithi" and "Uppiliappan Sannithi". The presiding deity is referred by various names like Venkatachalapathy, Thiruvinnagarappan, Oppilaappan, Thanoppillaappan, Uppiliappan and Srinivasan.[6] 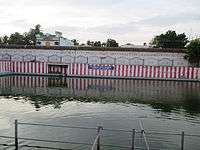 View of the temple tank

It is not clear from the inscriptions and records as to when the temple was initiated, but there are inscriptions from the Medieval Cholas period indicating generous gifts to the temple. There are two inscriptions recorded from the Naganathar Temple in Tirunageswaram. The epigraph numberered 211 of 1911 on the northern wall of the central shrine indicates gift of gold jewel worked in gems and pearls to the temple from the Chola king Parakesarivarman alias Rajendra Chola I (1012–44 CE). The second inscription numbered 218 of 1911 on the southern wall of the same shrine indicates a gift of land to the temple in the fourteenth year of the Chola king Rajaraja Rajakkesarivarman I.[7][8][9]

The tradition in many ancient temples in Tamil Nadu including the one in the temple is that the original image of the presiding deity is made of wood and replaced later with stone.[10] There were lot of additions made to the temple by Govinda Dikshitar, the minister of successive Nayak rulers, Achuthappa Nayak (1560–1614) and Raghunatha Nayak (1600–34).[11] The temple is maintained and administered by the Hindu Religious and Endowment Board of the Government of Tamil Nadu.As per traditional saying uppiliappan is the brother of lord narayanna. 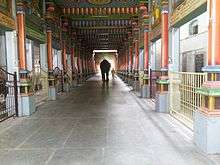 Elephant and mahout walking through the pillared hall.

The temple has a five-tiered rajagopuram (the gateway tower) and enshrined within a granite wall. The complex contains all the shrines and water bodies associated with it. The Sahasradhari plate and pot (kudam) are made of gold for performing Thirumanjanam (ablution) to the presiding deity. The temple also maintains golden sword, diamond crown and gold arm guard for the image of Hanuman. The shrine over the sanctum is plated with gold.[12] The main shrine of the temple houses the image of Oppiliappan in standing posture and it also houses the images of Bhoomidevi and sage Markendeya. The vimana is called Suddhananda, meaning "pure happiness". The Desika shrine is located near the sancturn sanctorum. On the sides of the first precinct, the shrine of Anjaneya is located on the southern, and Alwars' and Sri Rama's on the northern and Ramanuja's on the eastern sides.The shrine for Maniappan is located in the second precinct in the southern side, while the shrines of Ennappan and the holy birth spot of Bhoomidevi are located in the northern side. Garuda's shrine is located right opposite the sanctum and right behind the temple mast. The shrine of dancing Krishna is located on the southern side of the main entrance.[13]

A marble hall is located on the western side in the inner precinct acts as the resting hall for the festival deities during festivals. Dolotsavam festival is celebrated in Another marble hall in the northern side of the temple. Adjoining the hall, there is a shrine where the images of Rama, Lakshmana, Sita and Hanuman are housed. The sacred bed chamber called Tiruppalliarai, covered full of mirrors is located next to it.A Yaga sala for performing religious rituals is present in the temple. The temple has a hall for housing festival vehicles, a library, and a hall with edight carved pillars on the banks of the temple tank, where the annual float-festival is celebrated. The Kodimandapa, located to the south of the Garuda shrine, is used for several day-to-day religious practises. The annual Kalyana Utsavam festival is performed in the hall amidst music and dance programmes.

Outside the main complex, the temple maintains two marriage halls, a rest house containing five rooms, two other halls, a housing each for the small chariot and the big chariot.There is a garden around the third precinct of the temple and a much bigger garden about 0.5 km (0.31 mi) to the south of the temple, where Tulasi and flowers are grown. A hall in the garden is used for resting deities during the Vasantotsavam festival celebrated for six days in May–June every year.[14][15][16] 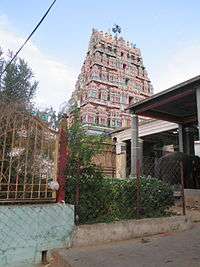 View of the shrine from the temple tank

The temple follows Vaigasana Agama and follows Vadagalai practises. During the Viswaroopa Seva, the first worship, Suprapada Prabarthi Mangalam, a verse exclusively dedicated to Uppiliappan is relayed. Thiruppavai is relayed after it, followed by naivethana in all shrines. Uchikalam is the last worship during the day time and happens at noon. During the evening, mutharkalam is the first worship sequence, recitals in Veda and Nithsuasandamam. Arthajamam is the last puja of the day.[17]

The chariot festival is the most prominent festival of the temple, celebrated for nine days during the Tamil month of Panguni (March–April) and devotees from various places pull the chariot round the streets of temple. Verses from the Nalayira Divya Prabandham are recited by a group of temple priests amidst music with nagaswaram (pipe instrument) and tavil (percussion instrument). The processional idols of Uppiliappan and Bhumidevi are brought to the temple car early in the morning amidst Vedic chantings. Subsequently, the festive idols are taken to the ther thatti mandapam (chariot launching hall). The ratharohanam, the rituals associated with taking the idols to the temple car is performed in an auspicious time before starting the procession. The temple celebrates six other festivals: Vasanta Utsavam (spring festival) for 6 days in the temple garden during Vaikasi (May–June), Pavitrotsavam (purifying festival) for 5 days during Avani (Aug – Sep), Brahmotsavam for nine days of Purattasi (Sept – Oct), Kalyana Utsavam (holy marriage of god and goddess) for 12 days commencing from Sravanam during Aippasi (Oct–Nov), Adhyayana Utsavam (ten-day-and-ten-night festival) during Margazhi (Dec–Jan) and float festival for 5 days during Thai(Jan – Feb).[18] Ramanavami, the festival associated with Rama, an avatar of Vishnu. The event is celebrated for ten days with music and dance performance and on the concluding day, kanakabhishekam (ablution with gold for the festival image) and Rama Pattabhishekam.[1][19] Sravan Deepam is a festival celebrated every month in the temple on the day of Tamil star of Thiruvonam and devotees observe fast called Sravana Vratham that day by consuming only unsalted food.[3] Tonsure ceremony for getting children shaved for the first time to promote proper growth and ear piercing is a very common practise followed in the temple.[20]

Uppiliappan is considered the elder brother of the presiding deity of Tirupathi Venkateshwara Temple.[21] The temple is revered in Nalayira Divya Prabandham, the 7th–9th century Vaishnava canon, by Periazhwar, Thirumangai Azhwar and Nammazhwar. The temple is classified as a divyadesam, the 108 Vishnu temples that are revered in the Vaishnava canon. The temple is counted as the fourteenth in the list of divyadesams in Chola Nadu and 83rd in the overall list. The Azhwars address the presiding deity by various names like Uppiliappan, Vinnagarappan and Venkatachalapathy and his consort Bhumidevi as Bhoomidevi Nachiar and Dharanadevi.[22] Periazhwar refers Uppiliappan as Thiruvinnagar Mevvane in his verses in Periathirumozhi while Namaazhwar called him "Thannoppaarillappan", that is he who has no comparison, meaning there is neither an equivalent nor superior to Vishnu. He mentions that "the Lord who by his powers affords solace for pining hearts, and renders them fit for service".[23][24][25] The temple is one of the most visited temples in the district.[26]