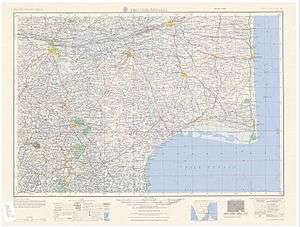 The middle and southern portion of Chola Nadu

Chola Nadu (Tamil: சோழநாடு) is a region of Tamil Nadu state in southern India. It encompasses the lower reaches of the Kaveri River and its delta, and formed the cultural homeland and political base of the Chola Dynasty which ruled most of South India and parts of Sri Lanka and South-East Asia between the 9th and 13th centuries AD. Uraiyur (now part of Tiruchirapalli city) served as the early Chola capital, then medieval Cholas shifted to Thanjavur and later cholas king Rajendra Chola I moved the capital to Gangaikonda Cholapuram in the 11th century.

The boundaries of the region roughly correlates with those of the British India districts of Tanjore and Trichinopoly. Culturally, the region also includes Pudukkottai District, Ariyalur District, Perambalur District and the territory of Karaikal.[1]

Kallanai / Grand Anicut built by Karikala Cholan, on the River Kaveri, near Tiruchirappalli

The Cholanadu region covers Central Tamil Nadu and East-Central Tamil Nadu. The region is sandwiched between the historical regions of Tondai Nadu in the north, the Madurai region in the south and Kongunadu in the west and roughly extends from Chidambaram in north to the southern frontier of the erstwhile Pudukkottai kingdom and from Tiruchirapalli in the west to the Bay of Bengal in the east.

According to the Gazetteer of the Trichinopoly District, Vol II, 1931, p 67, "the traditional meeting place of the three Tamil kingdoms was the temple of Cellānti Amman on the banks of the Kāvēri, twelve miles west of Kulittalai and three miles below the junction of the Amarāvati and the Kāvēri. The temple was the common place of worship for the kings of the three Tamil dynasties; a bund which runs to the south of the river marks the boundary between the Cōla and the Pāntya territories, and the Karaipōttanār on the opposite bank of the river was the boundary between the Cōla and the Cēra kingdoms".[2]

The history of the region begins with the rise of the Early Chola kingdom in the 4th century BC. The Early Cholas ruled from the town of Uraiyur near Tiruchirapalli and their kingdom comprised the whole of the present-day Cauvery Delta. Flourishing centres of Roman trade have been excavated at Poompuhar stand testimony to a prosperous civilization.

The Chola Nadu region is renowned as a hub of Tamil culture and civilization. The region has been continuously inhabited since the 1st millennium BC. Arts, crafts and music flourished under the Cholas whose reign is considered to be the golden age in the history of Tamil Nadu. During the hegemony of the Vijayanagar Empire and its successors, the zThanjavur Nayak kingdom, there were frequent migrations of priests, administrators, soldiers and artists from the Telugu and Kannada districts of the north who brought in their traditions, art and dance forms. Despite its rise and initial success in the northern part of Karnataka, Carnatic music actually flourished in the Cauvery Delta. The three great Carnatic music composers, Tyagaraja, Syama Sastri and Muthuswami Dikshitar who form the Great Trinity of Carnatic music hailed from the Chola Nadu region as also the music composers Muthu Thandavar, Arunachala Kavi and Marimutthu Pillai who form the Tamil Trinity of Carnatic music.

Apart from music, dance and drama have also flourished in the Cauvery Delta. The Bhagavathar Melas, a series of dance-dramas, written almost entirely in Telugu, were introduced by migrants who sought refuge in the town of Melattur following the collapse of the Vijayanagar kingdom at the Battle of Talikota.

The Chola Nadu region had a population of over 10 million with a density of above 400 persons per square kilometre in 2001. Due to fertile soil and favourable climate, the region has been the most densely populated in the Tamil country since ancient times.

More than 90 percent of the population speak Tamil. There is a significant Telugu speaking minority, who had descended from migrants who had mostly moved in during the Vijayanagar and Thanjavur Nayak periods. There are smaller populations speaking Kannada, Saurashtrian and Urdu. There are also a considerable body of Marathi speaking people who are mostly present in the urban areas of Thanjavur District and the city of Tiruchirappalli.