Sarangapani Temple is a Hindu temple dedicated to Vishnu, located in Kumbakonam, Tamil Nadu, India. It is one of the Divya Desams, the 108 temples of Vishnu revered in Nalayira Divya Prabandham by the 12 poet saints, or Alwars.[1] This temple is along Kaveri and is one of the Pancharanga Kshetrams.[2]

The temple is believed to be of significant antiquity with contributions at different times from Medieval Cholas, Vijayanagar Empire and Madurai Nayaks. The temple is enshrined within a huge granite wall and the complex contains all the shrines and the water bodies of the temple. The rajagopuram (the main gateway) has eleven tiers and has a height of 173 ft (53 m). The Potramarai tank, the temple tank, is located opposite to the western entrance of the temple.

Sarangapani is believed to have appeared for sage Hemarishi. The temple has six daily rituals at various times from 5:30 a.m. to 9 p.m., and twelve yearly festivals on its calendar. The temple chariot festival is the most prominent festival of the temple, celebrated during the Tamil month of Chittirai (March–April). The twin temple chariots are the third largest in Tamil Nadu, each weighing 300 t (660,000 lb).

As per Hindu legend, the Vaishnava deity, Sarangapani, an incarnation of Hindu god Vishnu, appeared for a sage Hema Rishi, who performed penance in the bank of Potramarai tank.[3] The penance was performed to obtain Lakshmi, the consort of Vishnu, as his daughter. Vishnu was pleased by the penance and he wished the sage to get Lakshmi as his daughter. Lakshmi emerged from the Potramarai tank among thousand lotuses and was thus named Komalavalli (the one who emerged from lotus). Vishnu descended to earth as Aravamudhan in a chariot drawn by horses and elephants from his abode Vaikuntam. He stayed in the nearby Someswaran Temple to woo Lakshmi to marry him and the couple eventually got married.[4] The name Sarangapani ("one who has the bow in his hand") derives from the Sanskrit word Sarangam meaning bow of Vishnu and pani meaning hand.[5]

Temple premises during consecration in 2015

Sarangapani is the largest Vishnu temple in Kumbakonam and has the tallest temple tower in the town. The temple is enshrined within a huge wall and the complex enshrines all the water bodies of the temple except the Potramarai tank. The rajagopuram (the main gateway) has eleven tiers and has a height of 173 ft (53 m). There are five other smaller gopurams in the temple. The rajagopuram has figures depicting various religious stories. The temple faces east and the Potramarai tank is located outside the western entrance. The central shrine of the temple is in the form of a chariot drawn by horses and elephants, with openings on either side, showing the descent of Sarangapani from heaven in the chariot.[3] There is a sculptural representation of the sage Hemarishi in the western part of the temple.[6] The central shrine of the temple houses the image of Sarangapani in pallikonda posture, with his head resting on his right hand. There are other images of sage Hemarishi, Lakshmi and festival images enshrined within the sanctum. There are two stepped entrances to the sanctum named as Utharayana Vaasal and Dhakshanayana Vaasal, each open for a six-month period. From 15 January to 15 July, Utharayanya Vaasal is opened while Dhakshanaya Vaasal is opened during the other half of the year. The Potramarai tank has a central hall called Hemarishi Mandapam.[4][7] The temple has two processional chariots carved out of wood stationed outside the rajagopuram.[7]

In Bharatanatyam, a South Indian dance form, 108 karanas form the basic movements. Some of these karanas are sculpted around the walls of the temple. Similar sculptures are found in the Brihadeeswarar Temple in Thanjavur and Nataraja Temple in Chidambaram.[8] 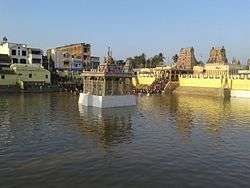 View of the temple from the Potramarai tank

Sarangapani temple is considered third in the line of Srirangam and Tirupathi temples.[5] The temple is revered in Divya Prabandham, the 7th–9th century Vaishnava canon, by Andal in one, Periyalvar in three, Bhoothathalvar in two, Thirumalisai Alvar in seven, Peialvar in two, Nammalvar in eleven and Thirumangai Alvar in 25 versesl. The temple is classified as a divyadesam, the 108 Vishnu temples that are revered in the Vaishnava canon. As per a Hindu legend, Nathamuni, who compiled Divya Prabandham by the twelve alvars, found only the first ten verses sung on Aravamudhan. Nammalvar recited the remaining 3990 verses unconsciously while he was in deep meditation and Nathamuni compiled all of them.[4][9]

Pancharanga Kshetrams (also called Pancharangams, meaning the "five Rangams or Ranganathas") is a group of five sacred Hindu temples, dedicated to Ranganatha, a form of the god Vishnu, on the banks of the Kaveri River. The five Pancharanga Kshetrams in the order of their successive locations, on the banks of the Kaveri River are: The Srirangapatnam called the Adi Ranga, the first temple on the banks of the Kaveri River from the upstream side; the Srirangam (island in Tiruchirappalli) in Tamil Nadu known as Adya Ranga (the last temple), Appalarangam or Koviladi at Tiurppernagar in Tamil Nadu, Parimala Ranganatha Perumal Temple or Mayuram at Indalur, Mayiladuthurai and Vatarangam at Sirkazhi. The Sarangapani temple at Kumbakonam is mentioned in place of Vatarangam in some references.[2][10][11]

Five Vishnu temples are connected with Mahamaham festival which happens once in 12 years in Kumbakonam.[12] They are:

Temple chariot of the temple

The temple follows Pancharatra Agama and Vadakalai tradition.[5] The temple priests perform the puja (rituals) during festivals and on a daily basis. Like other Vishnu temples of Tamil Nadu, the priests belong to the Brahmin Vaishnavite sect, which is dedicated to Vishnu. The temple rituals are performed six times a day; Tiruvanandal at 8:00 a.m., Kala santhi at 9:00 a.m., Uchikalam at 12:30 p.m., Ntiyanusandhanam at 6:00 p.m., Irandamkalam at 7:30 p.m. and Ardha Jamam at 9:00 p.m.[13] Each ritual comprises three steps: alangaram (decoration), neivethanam (food offering) and deepa aradanai (waving of lamps) for both Sarangapani and Thayar. The food offering during the six times are curd rice, Ven pongal, spiced rice, dosa, Ven pongal and sugar pongal respectively.[13] The worship is held amidst music with nagaswaram (pipe instrument) and tavil (percussion instrument), religious instructions in the Vedas (sacred text) read by priests and prostration by worshippers in front of the temple mast. There are weekly, fortnightly and monthly rituals.

Five Vishnu temples are connected with Mahamaham festival which happens once in 12 years in Kumbakonam. They are Sarangapani Temple, Chakrapani Temple, Ramaswamy Temple, Rajagopalaswamy Temple and Varahaperumal Temple. This temple, one among them, is situated in the north of Big Street.[12]

The twin temple chariots weigh 300 t (660,000 lb) each and has been renovated in 2007. The chariots were not drawn for some years during the preceding period. The chariots are next only in size to the ones in Thygaraja temple in Thiruvarur and Andal Temple in Srivilliputhur. The chariots are pulled by hundreds of devotees across the streets around the temple twice a year, once during the Brahmmotsavam during April–May and other during Ratasaptami in January–February. The festival idols of Sarangapani and Kamalvalli are brought to the thermutti (chariot station) after elaborate religious rituals.[15]

As per a temple legend, once a staunch Brahmin devotee of Aravamudhan spent most of his life to the service of the deity. At the end of his life, he felt his loneliness and prayed for his karma to be performed. Aravamudhan descended himself to perform the last rites on a Deepavali day. The ritual is performed annually by the priests and is one of its kind where death rituals are performed in the precincts of a Vishnu temple.[4]