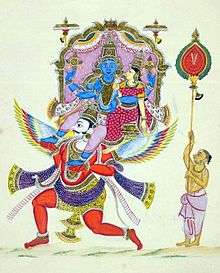 A Divya Desam (Tamil: திவ்ய தேசம்) is one of the 108 Vishnu temples that are mentioned in the works of the Tamil Azhvars (saints). Divya means "premium" and Desam indicates "place" (temple). Of the 108 temples, 105 are in India, one is in Nepal, and last two are outside the Earthly realms.The last two are Thirupalkadal and Paramapadam.Tirupalkaddal is the ocean of milk and paramapadam is the Srivaikuntam where lord Narayana presides. The Divya Desams are revered by the 12 Azhvars in the Divya Prabandha, a collection of 4,000 Tamil verses. While most Divya Desams follow Thenkalai mode of worship, some follow Vadakalai too among others.

Image of Rangamannar-Andal temple in Srivilliputhur

The word azhwar means the one who dives deep into the ocean of the countless attributes of god. Azhwars are considered the twelve supreme devotees of Vishnu, who were instrumental in popularising Vaishnavism during the 5th-8th centuries A.D. The religious works of these saints in Tamil, songs of love and devotion, are compiled as Nalayira Divya Prabandham containing 4000 verses and the 108 temples revered in their songs are classified as Divya desam.[1][2] The saints had different origins and belonged to different castes. As per tradition, the first three azhwars, Poigai, Bhutha and Pey were born miraculously. Tirumizhisai was the son of a sage, Thondaradi, Mathurakavi, Peria and Andal were from brahmin community, Kulasekhara from Kshatria community, Namm was from a cultivator family, Tirupana from panar community and Tirumangai from kazhwar community. Divya Suri Saritra by Garuda-Vahana Pandita (11th century AD), Guruparamparaprabavam by Pinbaragiya Perumal Jiyar, Periya tiru mudi adaivu by Anbillai Kandadiappan, Yatindra Pranava Prabavam by Pillai Lokacharya, commentaries on Divya Prabandam, Guru Parampara (lineage of Gurus) texts, temple records and inscriptions give a detailed account of the azhwars and their works. According to these texts, the saints were considered incarnations of some form of Vishnu. Poigai is considered an incarnation of Panchajanya (Krishna's conch), Bhoothath of Kaumodakee (Vishnu's Mace/Club), Pey of Nandaka (Vishnu's sword), Thirumalisai of Sudarshanam (Vishnu's discus), Namm of Vishvaksena (Vishnu's commander), Madhurakavi of Vainatheya (Vishnu's eagle, Garuda), Kulasekhara of Kaustubha (Vishnu's necklace), Periy of Garuda (Vishnu's eagle), Andal of Bhoodevi (Vishnu's wife, Lakshmi, in her form as Bhudevi), Thondaradippodi of Vanamaalai (Vishnu's garland), Thiruppaan of Srivatsa (An auspicious mark on Vishnu's chest) and Thirumangai of Saranga (Krishna's bow). The songs of Prabandam are regularly sung in all the Vishnu temples of South India daily and also during festivals.[2][3]

According to traditional account by Manavala Mamunigal, the first three azhwars namely Poigai, Bhoothath and Pey belong to Dwapara Yuga (before 4200 BC). Modern historians place the period of azhwars from the 5th to 8th century AD, but there is dispute about the chronology and relation between each other. But it is widely accepted by tradition and historians that the trio are the earliest among the twelve azhwars.[1][2][4][5][6] Along with the three Saiva nayanmars, they influenced the ruling Pallava kings, creating a Bhakti movement that resulted in changing the religious geography from Buddhism and Jainism to these two sects of Hinduism in the region. The azhwars were also instrumental in promoting the Bhagavatha cult and the two epics of India, namely, Ramayana and Mahabaratha.[7] The azhwars were instrumental in spreading Vaishnavism throughout the region.[8] The verses of the various azhwars were compiled by Nathamuni (824-924 AD), a 10th-century Vaishnavite theologian, who called it the "Tamil Veda".[9][10]

The list of deities[11] in the divyadesams is shown.