"Walk the plank" redirects here. For other uses, see Walk the Plank (disambiguation). 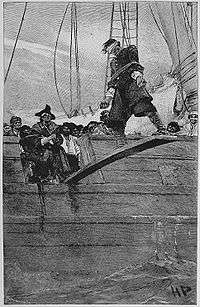 Walking the plank was a method of execution thought to have been practiced on special occasion by pirates, mutineers, and other rogue seafarers. For the amusement of the perpetrators (and the psychological torture of the victims), captives were bound so they could not swim or tread water and forced to walk off a wooden plank or beam extended over the side of a ship, until falling into the water (usually an area of water infested by sharks).

Earliest documented record of the phrase

The phrase is recorded in English lexicographer Francis Grose's Dictionary of the Vulgar Tongue, which was published in 1788 (first published in London in 1785).[1] Gosse writes;

Walking the plank. A mode of destroying devoted persons or officers in a mutiny on ship-board, by blind-folding them, and obliging them to walk on a plank laid over the ship's side; by this means, as the mutineers suppose, avoiding the penalty of murder.[1]

In 1769, mutineer George Wood confessed to his chaplain at London's Newgate Prison that he and his fellow mutineers had sent their officers to walk the plank.[2]

A Mr. Claxton, surgeouns-mate aboard the Garland in 1788, testified to a committee at the House of Commons about the following events:[3]

The food, notwithstanding the mortality, was so little, that if ten more days at sea, they should, as the captain and others said, have made the slaves walk the plank, that is, throw themselves overboard, or have eaten those slaves that died.

In July 1822, William Smith, captain of the British sloop Blessing, was forced to walk the plank by the Spanish pirate crew of the schooner Emanuel in the West Indies.[4]

The Times of London reported on February 14, 1829 that the packet Redpole (Bullock, master) was captured by the pirate schooner President and sunk. The commander was shot and the crew were made to walk the plank.[5]

In 1829, pirates intercepted the Dutch brig Vhan Fredericka in the Leeward Passage between the Virgin Islands, and murdered most of the crew by making them walk the plank with cannonballs tied to their feet.[6][7]

It was said that forcing loyal seamen to walk the plank was supposed, by the perpetrators, to "avoid the penalty for murder",[8] but this legal argument would hardly have worked. Not only would most legal authorities not have hesitated to prosecute any person who forced another to his death, but piracy and mutiny were also capital crimes. Given the occasions on which it was known to have been employed, it appears more likely to have been an elaborate and unusual form of sadistic entertainment rather than a regular method of murdering unwanted captives.

The term has been used in modern times to describe the resignation of a public figure which occurs amidst controversy, or was demanded by the public, corporate shareholders and suchlike.