This article is about a city in Telangana, India. For its namesake district, see Warangal (urban) district.

pronunciation  is a city and the district headquarters of Warangal (urban) district in the Indian state of Telangana. It is also the mandal headquarters of Warangal mandal in Warangal revenue division.[6][7] As of 2011 census of India, the city had a population of 811,844, making it the 2nd most populous in the state. Warangal is one among the 12 heritage cities in the country chosen for Scheme HRIDAY – Heritage City Development and Augmentation Yojana by Government of India.[8] It is also selected as a smart city in the "fast-track competition", which makes it eligible for additional investment to improve the urban infrastructure and industrial opportunities under Smart Cities Mission.[9]

Warangal, then known as Orugallu, was the capital of the Kakatiya dynasty from 1195 CE until that ruling family was defeated by the Delhi Sultanate in 1323. The city was then renamed as Sultanpur.[12]

Kakatiya Period Inscriptions praised Warangal as best city within all of Andhra up to shores of the Ocean.[13]

The Kakatiyas left many monuments, including an impressive fortress, four massive stone gateways, the Swayambhu temple dedicated to Shiva, and the Ramappa temple situated near Ramappa Lake. The cultural and administrative distinction of the Kakatiyas was mentioned by Marco Polo. After the defeat of Prataparudra II, the Musunuri Nayaks united 72 Nayak chieftains and captured Warangal from Delhi Sultanate and ruled for fifty years. After the demise of the Nayaks, Warangal was part of the Bahmani Sultanate and then the Sultanate of Golconda.

The Mughal emperor Aurangzeb conquered Golconda in 1687, and it remained part of the Mughal empire until the southern provinces of the empire split away to become the state of Hyderabad in 1724, which included the Telangana region and some parts of Maharashtra and Karnataka. Hyderabad was annexed to India in 1948, and became an Indian state called as Hyderabad state. In 1956 Hyderabad state was partitioned as part of the States Reorganisation Act, and Telangana, the Telugu-speaking region of Hyderabad state, which includes Warangal, became part of Andhra Pradesh. After the Telangana movement, Telangana state was formed on 2 June 2014, warangal became part of Telangana State.

Warangal is located at 18°00′N 79°35′E﻿ / ﻿18.0°N 79.58°E﻿ / 18.0; 79.58. It has an average elevation of 302 metres (990 feet). It is settled in the eastern part of Deccan Plateau made up of granite rocks and hill formations[14] which left the region barren making the cultivation depend on seasonal rainfalls. There are no river flows nearby warangal, which makes it to rely on Kakatiya Canal which originates from Sriram Sagar Project to meet the drinking water requirements.[15][16] Located in the semi-arid region of Telangana, Warangal has a predominantly hot and dry climate. Summer starts in March, and peak in May with average high temperatures in the 42 °C (108 °F) range. The monsoon arrives in June and lasts until September with about 550 mm (22 in) of precipitation. A dry, mild winter starts in October and lasts until early February, when there is little humidity and average temperatures in the 22–23 °C (72–73 °F) range. Many hill rocks and lakes are located around warangal. Padmakshi hill and Govinda Rajula Gutta are two famous hills with temples.[17][18]

Bhadrakali Lake and Waddepally Lake are the two famous lakes which adds scenic beauty and also are the major sources of drinking water.[19] 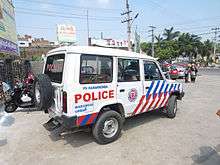 Greater Warangal Municipal Corporation is the civic body of the city, which oversees the civic needs. The GWMC covers an area of 407.77 square kilometres (157.44 sq mi).[23]

City planning is governed by the Kakatiya Urban Development Authority, which was constituted in 1982. The body oversees development of infrastructure and other projects in the city.[24]

The former Warangal Municipal Corporation implemented some pilot projects, such as the Solid Waste Management programme, that were so successful that other corporations have since implemented them.[25][26] The city is divided into 58 political wards where each ward is represented by an area corporator.

The urban police district, which is responsible for maintaining law and order in city and agglomerated areas around Warangal was converted into a Police Commissionerate by the state government in 2015.[27][28] Inspector General will be working as police commissioner who is also given magisterial powers. There are around 19 police stations present under warangal commissionerate.[29]

The 1000-bed Mahatma Gandhi Memorial Hospital is the largest hospital in the city. It also serves the needs of patients from the neighbouring districts of Khammam and Karimnagar.[30]

Apart from major public hospitals such as those for maternity, chest and tuberculosis, there are many private specialist hospitals including Lifeline, Rohini, Jaya, Guardian, Max Care, and St.Ann's.[31]

As of 2011 census of India, Warangal is one of the Indian cities that has seen rapid growth of urbanisation from 19%–28%, alongside cities such as Gandhinagar, Kozhikode.[32]

Agriculture is the main economic activity with irrigation depending mainly on monsoon and seasonal rainfalls. Major crops are paddy, cotton, mango and wheat. Warangal benefits from the Godavari lift irrigation scheme which is designed to lift water from the Godavari river to irrigate drought prone areas in the Telangana region.[33]

The city hosts second-biggest grain market of Asia, located in Enumamula.[34] Information Technology is another sector in which the city is making steady progress with its Incubation centre at Madikonda.[35][36] 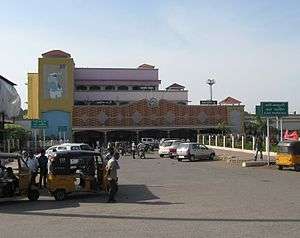 The city is connected to major cities and towns by means of road and railways. National and state highways that pass through the city are, National Highway 163, connecting Hyderabad and Bhopalpatnam; NH 563 connecting Ramagundam and Khammam; State highway 3. TSRTC operates buses to various destinations from Hanamkonda and Warangal bus stations of the city.[37] City buses runs in various routes across the city and sub urban areas.[38]

Warangal has two railway stations namely, Kazipet and Warangal on the important New Delhi-Chennai main line of Indian Railways.[39] They are administered under the jurisdiction of the Secunderabad railway division of South Central Railway zone. Kazipet Junction shelters both Electric and Diesel Loco sheds with a capacity of holding 175 and 142 locomotives.[40][41] Vanchanagiri, Hasanparthy Road railway station are the other railway stations within the city limits. The construction of third railway line between Balharshah and Kazipet was sanctioned at an estimated cost of ₹24.032 billion (US$360 million).[42]

Warangal has an airport built by the Nizams at Mamnoor in 1930. It was largest airport in undivided India with 1,875 acres of land, a 6.6-km runway, a pilot and staff quarters, a pilot training centre and more than one terminal. Many cargo services and Vayudoot services were served. During the Indo-China war, it served as a hangar for government aircraft due to Delhi airport being a target in combat. It remained in service until 1981.[43]

This airport is currently being used as NCC Training Centre by No. 4(A) air squadron for gliding sorties, skeet shooting and aero-modeling.[44] There is no scheduled commercial air service from this airport at present.

Both government and private institutions has their presence in the city.

The Ministry of Tourism has awarded Warangal as the best heritage city, at the National Tourism Awards for the year 2014-2015.[50] This is third time in a row for the city to get this award since 2012.[51]

Festivals in the city include, a floral festival of Bathukamma being celebrated by women of the city, worshiping the goddess with different flowers for nine days.[53] The women carry their Bathukamma to the nearest temple of their locality, then they clap, sing and dance rhythmically around the Bathukamma.[54] Along with Bathukamma, Bonalu is also declared as a state festival on 15 June 2014.[55] Other festivals are, Sammakka Saralamma Jatara (Medaram Jatara), a popular religious congregation in the honour of Goddess at Medaram of Warangal district.

The cuisine of the city is mainly of South Indian dishes. The breakfast items include Idli, Dosa, Vada, and Puri. Rice with variety of curries including curd is taken as main food and the most notable one is the Biryani. Special food items Harees and Haleem are traditional food items available in the season of Ramadan.[56]