This article is about the track and field event. For the multi-sport event, see Modern pentathlon. 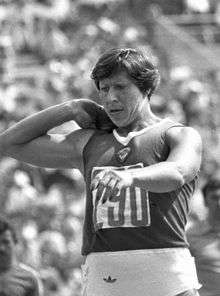 Nadezhda Tkachenko competing in the shot put event at the 1980 Olympic pentathlon, where she won the gold medal

The pentathlon or women's pentathlon is a combined track and field event in which each woman competes in five separate events over one day (formerly two days). The distance or time for each event is converted to points via scoring tables, with the overall ranking determined by total points.[1] Since 1949 the events have been sprint hurdling, high jump, shot put, long jump, and a flat race.[2] The sprint hurdles distance was 80 m outdoors until 1969 and thereafter 100 m; in indoor pentathlon the distance is 60 m. The flat race was 200 m until 1976 and thereafter 800 m.[3] In elite-level outdoor competition, the pentathlon was superseded in 1981 by the heptathlon, which has seven events, with both 200 m and 800 m, as well as the javelin throw.[4] Pentathlon is still contested at school and masters[5] level and indoors.

The word pentathlon is derived from the Greek pente (five) and athlon (contest). The ancient Olympic pentathlon comprised a sprint, the javelin and discus throws, long jump, and wrestling. The modern pentathlon is a multi-sport event. In men's track and field, pentathlon competitions were held in the 20th century, but the ten-event decathlon became the standard multi-event contest.

The International Women's Sports Federation was established in 1921 and the first reported pentathlon was in 1922 in Monte Carlo.[2] The events were: 60 m, 300 m, high jump, two-hand javelin, and two-hand shot.[2] In the late 1920s, the events were: shot and long jump on the first day, and 100 m, high jump, and javelin on the second day.[2] The first world record recognised by the IAAF was set at the 1934 Women's World Games by Gisela Mauermayer.[2]

The pentathlon is still held indoors, where the heptathlon cannot be held as arenas are too small for the javelin throw. It was added to the IAAF World Indoor Championships as an unofficial event in 1993 and officially in 1995. The indoor pentathlon is held over a one-day period. Each athlete completes one event at the same time, then there is a 30-minute break until the next event. The current world record is 5013 points by Nataliya Dobrynska at the 2012 World Indoor Championships.[6]

As well as indoor events at all levels, outdoor pentathlon is still common in high school athletics. It is simply a smaller version of the decathlon or a heptathlon. For girls, it is 100 m high hurdles, long jump, shot put, high jump, and an 800 m run. The pentathlon is used because it is less stressful on the athletes than a full multi and because many high school meets only last one day, it allows the event to be contested in the time limit.