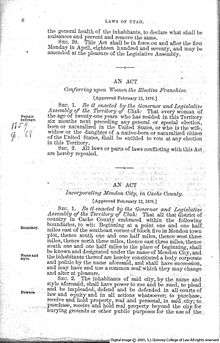 An Act Conferring upon Women the Elective Franchise, enacted February 12, 1870

Women's suffrage in Utah was first granted in 1870, in the pre-federal period, decades before statehood. Among all U.S. states, only Wyoming granted suffrage to women earlier than Utah.[1] However, in 1887 the Edmunds-Tucker Act was passed by Congress in an effort to curtail Mormon influence in the territorial government, disallowing the franchise of the majority of residents of the state.

Repeal by the Edmunds-Tucker Act

One of the provisions of the Edmunds–Tucker Act was the repeal of women's suffrage; full suffrage was not returned until Utah was admitted to the Union in 1896. The opposition of the majority of Utahns to this act was secured by a provision that required a test oath against polygamy. This was broad enough to include the majority of Mormons who were not directly involved in polygamy. All who would not swear this test oath were ineligible to vote, serve on juries, or hold most other government offices. In addition, the Justice Department sent west a host of federal marshals to investigate the private lives of church members. These were unable to identify individuals properly due to the blanket nature of the oath.

The town of Beaver City was the seat of the federal court and the marshals involved in the holding of women and children there. For this reason the LDS Church issued the 1890 Manifesto renouncing future polygamous marriages solemnized by the Church.[2]

During the most of the second half of the 19th century federal Laws which deemed each incident of overnight cohabitation a separate felony. Such laws had a chilling effect on the lives of women and children throughout the late 19th century, many of those impacted relocated to other territories or across the border to Mexico or Canada.[3][4][5]

This article is issued from Wikipedia - version of the 12/14/2015. The text is available under the Creative Commons Attribution/Share Alike but additional terms may apply for the media files.