Cairo (stylized as cairo) is a programming library that provides a vector graphics-based, device-independent API for software developers. It provides primitives for 2-dimensional drawing across a number of different back ends. Cairo uses hardware acceleration[3] when available.

There is a formal proposal to standardize C++ 2D graphic API based on a mechanical transformation of Cairo.[4]

A library written in one programming language may be used in another language if bindings are written; Cairo has a range of bindings for various languages including C++, C# and other CLI languages, Delphi, Factor, Haskell, Lua, Perl, PHP, Python, Ruby, Scheme, Smalltalk and several others.[5]

Since Cairo is only a drawing library, it can be quite useful to integrate it with a graphical user interface toolkit.

There are other back-ends in development targeting the graphics APIs OpenVG,[9] Qt,[10] Skia,[11] and Microsoft's Direct2D.[12] 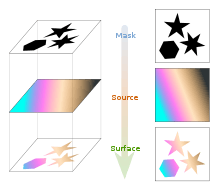 The Cairo drawing model is somewhat unorthodox and relies on a three layer model.

This constitutes a fundamentally different approach from Scalable Vector Graphics. 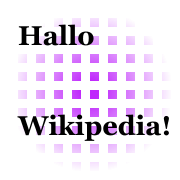 SVG-picture generated by this example

Quite complex "Hello world"-graphics can be drawn with the help of Cairo with only a few lines of source code:

Cairo is popular in the open source community for providing cross-platform support for advanced 2D drawing.

Keith Packard and Carl Worth founded the Cairo project for use in the X Window System.[2] It was originally (until at least 2003) called Xr or Xr/Xc. The name was changed to emphasize the idea of a cross-platform library to access display server, not tied to the X Window System.[19] The name Cairo derives from the original name Xr, interpreted as the Greek letters chi and rho.[20]