GDM (the GNOME Display Manager) is a display manager (a graphical login program) for the windowing systems X11 and Wayland.

The X Window System by default uses the XDM display manager. However, resolving XDM configuration issues typically involves editing a configuration file. GDM allows users to customize or troubleshoot settings without having to resort to a command line. Users can pick their session type on a per-login basis. GDM 2.38.0 is the last version that features customization with themes; subsequent releases do not support themes.

The GNOME Display Manager (GDM) is a display manager that implements all significant features required for managing attached and remote displays. GDM was written from scratch and does not contain any XDM or X Consortium code.[3]

GNOME Display Manager (GDM) is the name, which is used to describe the software package as a whole. It comprises the following components: 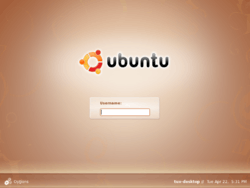 Until version 2.22,[4] GDM had a few Easter eggs, in the form of strings to be entered in the username box. These can be found in the source file "gui/guilogin.c", in a function named "evil".[5]

Some of the copyright notices of GDM refer to the "Queen of England", whom release announcements from version 2.2.1 also named as a maintainer.[7] Subsequently, developers realised that the title "Queen of England" has not existed since the Acts of Union of 1707.[8]

As of version 3.0 the GNOME display manager switched to using AccountService for saving the user's selected session rather than storing it in the user's home directory, effectively making it unusable in a networked environment.[9]