This article is about a software project. For the wine, see Nouveau.

In the middle: the FOSS stack, composed out of DRM & KMS driver, libDRM and Mesa 3D. Right side: Proprietary drivers: Kernel BLOB and User-space components.

nouveau (/nuːˈvoʊ/) is a free and open-source graphics device driver for Nvidia video cards and the Tegra family of SoCs written by independent software engineers, with minor help from Nvidia employees.

The project's goal is to create an open source driver by reverse engineering Nvidia's proprietary Linux drivers. It is managed by the X.Org Foundation, hosted by freedesktop.org, and is distributed as part of Mesa 3D. The project was initially based on the 2D-only free and open-source "nv" driver, which Red Hat developer Matthew Garrett and others claim had been obfuscated.[4] nouveau is licensed under the MIT License.

The name of the project comes from the French word nouveau, meaning new.[5] It was suggested by the original author's IRC client's French autoreplace feature, which suggested the word "nouveau" when he typed "nv".[6] 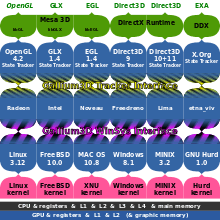 Nouveau has been rewritten as a Gallium3D-style graphics device driver.

Nouveau is a Gallium3D-style device driver and works on top of the Direct Rendering Infrastructure (DRI). It is composed of the two Kernel-components DRM & KMS driver, and the user-space components libDRM, and Mesa 3D.

For technical reasons Nvidia GPUs all boot with a low frequency (called "clock"), the device driver has to set a higher frequency after booting. Due to lack of documentation of GPU, nouveau lacked this capability from the beginning on. The result was/is a major loss in performance, as proven by benchmarks which compared the performance of Nvidia proprietary device driver with nouveau's.[7] In June 2014, a breakthrough was finally achieved and initial re-clocking support was added to nouveau.[8][9][10] 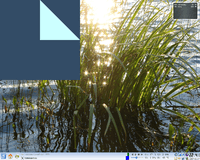 In a very sharp contrast to AMD, Nvidia has provided no documentation whatsoever about their GPUs. The developers of nouveau have been forced to use clean-room reverse engineering to obtain the necessary data to enable them to write nouveau. The project uses several custom-made programs for its reverse engineering, such as MmioTrace (Memory Mapped I/O Trace),[11] REnouveau and Valgrind MMT.[12]

REnouveau (Reverse Engineering for nouveau)[13] is a program licensed under the GNU GPL (using SDL) that collects data for most of nouveau's reverse engineering work. Users with the proprietary NVIDIA drivers can help the development of nouveau by providing information about the hardware of their NVIDIA cards through REnouveau. REnouveau works by copying the current graphics card MMIO register space, drawing some graphics and taking another copy of the MMIO, and outputting the difference to a text file. It runs about six dozen different tests which the user of the computer then makes a tar.bz2 archive of and submits by e-mail, after which it is automatically transferred to the project's FTP servers for the developers to analyze.

Only the kernel has direct access to the hardware, this includes the graphics card. End-user software accesses it through various interfaces, that are specific to the task. Nouveau is being written as a Gallium3D-type of device driver, which means that it shares large amounts of code with other Gallium3D drivers. Most of this shared core is being mainlined in Mesa 3D and then distributed as such by the various Linux distributions.

Mesa 3D and the drivers it includes, supports multiple rendering interfaces, all designed to give user-space programs, such as e.g. video games or CAD software, access to the correspondent SIP blocks.

A free and open-source implementation of Direct3D version 9 has been mainlined into Mesa 3D. It can be used with nouveau; however, since any software that is using Direct3D is programmed for Windows this software can only be used together with Wine on Linux. 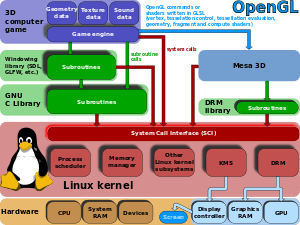 Data and instructions are sent to the GPU for processing. The rendered results are not sent back to main memory. Instead they are stored in a framebuffer. The content of the framebuffer is subsequently sent to the display controller.

The rendering interface OpenGL is being developed by the Khronos Group. Implementations of this API are part of Nvidia's or AMD's proprietary "Catalyst". Another implementation is being written by free software enthusiasts, such as Brian Paul or Intel and coordinated in Mesa 3D. Being a Gallium3D-type of driver, Nouveau needs only minor adaptations to work with this implementation.

Mesa 3D supports multiple interfaces, all designed the give user-space programs, such as e.g. GStreamer or HandBrake, access to the correspondent SIP blocks. And it is also possible to use the IC designed for rendering calculations for this purpose, though this approach consumes much more electrical power, compared to utilizing the PureVideo SIP block.

Nouveau supports PureVideo and provides access to it through VDPAU and partly through XvMC.[14]

Nouveau does not support Nvidia NVENC.

Nouveau does not support CUDA. 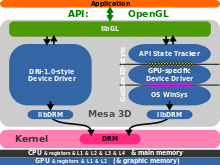 Nouveau originally used the Direct Rendering Infrastructure (DRI) of Mesa 3D for rendering 3D computer graphics, which allows to accelerate 3D drawing using the graphics processing unit (GPU) directly from the 3D application; but in February 2008 the work on DRI support ceased and moved on to the new Gallium3D.[21][22]

On 23 September 2013[23] Nvidia publicly announced, that they would release some documentation about their GPUs with the intent to address areas that impact the out-of-the-box usability of NVIDIA GPUs with Nouveau.

As of 31 January 2014, Nvidia's Alexandre Courbot committed an extensive patch set which add initial support for the GK20A (Tegra K1) to nouveau.[24]

As of 9 July 2016, Red Hat employee Ben Skeggs committed a patch which adds support for the Pascal-based GP104 chip found on GeForce GTX 1070 and GeForce GTX 1080-branded graphics cards to the Linux kernel.[25]

Illustration of the Linux graphics stack: DRM, KMS driver, & libDRM, Mesa 3D. Display servers are a component of the windowing system and not required for playing video games.

In June 2014, Codethink reported to run Wayland-based Weston compositor with Linux kernel 3.15, making use of EGL and a "100% open-source graphics driver stack" on a Tegra K1.[33]

In comparison, benchmarks, nouveau has not been able to keep up with Nvidia's proprietary graphics device drivers.[34]