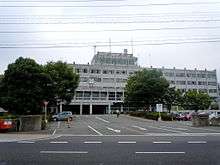 Kōriyama (郡山市, Kōriyama-shi) is a city in central Fukushima Prefecture, Japan. As of February 2015, the city has an estimated population of 329,339[2] and a population density of 435 persons per km². The total area was 757.06 km². Kōriyama is designated as a "core city" and functions as a commercial center for Fukushima Prefecture. Kōriyama is the second largest conurbation in the Tōhoku region.

Kōriyama originated as a regional governmental center in the Nara period, when the area was on the frontier of Yamato settlement of the Tohoku region. The surrounding area developed into shōen controlled by various samurai clans in the Heian and Kamakura periods. Nearby centers, such as Nihonmatsu developed into castle towns, Kōriyama remained as a commercial center and thrived as a post town because of its importance as a traffic focal point into the Edo period.

With the establishment of the municipalities system on April 1, 1889, the town of Kōriyama was established within Asaka District. In the early Meiji period, many dispossessed samurai were assigned undeveloped lands in the area to reclaim and as a result, the population grew and region developed into an agricultural center. The relative abundance of hydroelectric power also helped with the development of local industry.

Kōriyama was raised from town to city status on September 1, 1924 with the annexation of neighboring Odawara Village. Kuwano Village was likewise annexed on June 1, 1925. During the 1930s, Kōriyama was noted a center for military equipment production. It was thus a target for American bombers during World War II, and the city was subject to three large-scale air raids during the war.

From 1954-1955, Kōriyama expanded by annexing the town of Otsuki and portions of the villages of Tomita and Iwae, and in 1965 annexed the villages of Nishida and Nakata. In 1997, the city received core city designation, giving it increased autonomy from national and prefectural governments.

On March 11, 2011, earthquake caused only minor damage, and Kōriyama is located outside of the mandatory evacuation on created by the Fukushima Daiichi nuclear disaster.

Kōriyama city is called the "commercial capital in Fukushima" and the economic bloc is the biggest in Fukushima Prefecture. There are many department stores and shops in the area around Kōriyama Station.

Kōriyama is an important transportation hub, as it is located in the center of Fukushima Prefecture and is the nexus of several railway lines and expressways. Kōriyama Station is the central station for the city. However, Kōriyama does not have an airport. 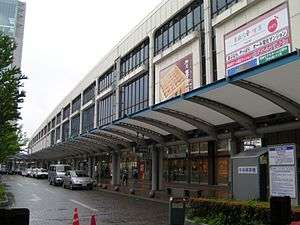 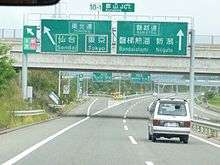