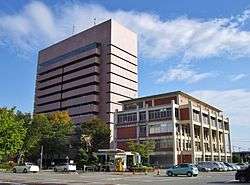 Maebashi is known to be the "City of Water, Greenery and Poets" because of its pure waters, its rich nature and because it gave birth to several Japanese contemporary poets, such as Sakutaro Hagiwara.[4]

Maebashi is located at the foot of Mt. Akagi in the northeast corner of the Kantō Plain. It is also surrounded by Mount Haruna and Mount Myogi. Two rivers run through the city: the Tone River, Japan's second-longest, and the Hirose River.

Maebashi is the farthest from the sea (about 120 km) of all Japanese prefectural capitals.

Maebashi has a humid subtropical climate (Köppen climate classification Cfa). In the winter, the "karakaze", or "dry wind" blows through Maebashi from the north. This is due to the snow clouds coming from the Sea of Japan being blocked by the Echigo Mountain Range between Gunma and Niigata Prefectures. Because of this, the city has a dry winter and is one of the sunniest places in Japan at over 2,210 hours of sunshine per year.[5] In the summer, it is hot since the location is inland. On July 24, 2001, Maebashi hit 40 °C (104 °F), the fifth-hottest temperature ever in Japan.

The modern town of Maebashi was established within Higashigunma District, Gunma Prefecture on April 1, 1889 with the creation of the municipalities system after the Meiji Restoration. Maebashi was raised to city status on April 1, 1892. In 1901, it annexed a portion of Kamikawabuchi village from Seta District. On August 5, 1945 approximately 64.2% of the urban core of the city was destroyed during World War II during air raids which followed the dropping of propaganda leaflets warning of the impending attacks.[8][9]

Maebashi area was called Umayabashi (厩橋) during the Nara Period. This name finds its origins in the fact that there was a bridge (hashi 橋) crossing the Tone River and not far from the bridge there was a small refreshment house with a stable (umaya 駅家), often used by people travelling on the Tōzan-dō (the way that was connecting the capital to the eastern regions of Japan). The spelling was officially changed into Maebashi (前橋) in 1649 during the Edo Period when Maebashi became a castle town and the center of Maebashi Domain, a feudal domain under the Tokugawa shogunate.[11] 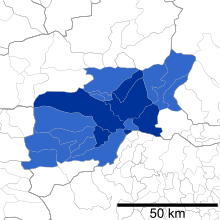 As of 2010, Greater Maebashi, Maebashi Metropolitan Employment Area, has a GDP of US$59.8 billion.[12][13] The air conditioning system and compressor manufacturing company Sanden Corporation as well as the tofu and tofu products company Sagamiya Foods have manufacturing sites in the city.[14] The Gunma Bank is headquartered in Maebashi.

There are 16 high schools, 23 middle schools, and 56 elementary schools in Maebashi.

Thespakusatsu Gunma at Shoda Shoyu Stadium Gunma was originally formed in Kusatsu, but plays in Maebashi due to J. League stadium requirements.