The 1994 African Cup of Nations was the 19th edition of the Africa Cup of Nations, the soccer championship of Africa (CAF). It was hosted by Tunisia, who replaced original hosts Zaire. Just as in 1992, the field of twelve teams was split into four groups of three. Nigeria won its second championship, beating Zambia in the final 2−1.

The Zambian team was recently constituted, following an air disaster in which eighteen players and several staff members of the previous team had been killed. 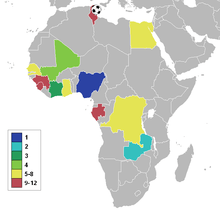 The 12 qualified teams are:

Teams highlighted in green progress to the Quarter Finals.

CAF Team of the Tournament