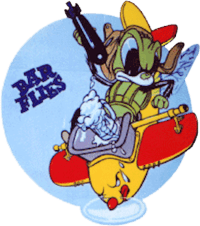 The 73d Bombardment Squadron is an inactive United States Air Force unit. It was last assigned to the 4241st Strategic Wing, based at Seymour Johnson Air Force Base, North Carolina. It was inactivated on 15 April 1963.

Established in late 1941 as a pursuit squadron in the Hawaii Territory, initially equipped with obsolete P-26 Peashooters, later with some early model Curtiss P-40C Warhawks. Most aircraft were destroyed on the ground at Wheeler Field during the Pearl Harbor Attack; squadron was reassigned to Bellows Field for re-equipping, being re-formed by May 1942 and redesignated as a Fighter Squadron assigned to the new Seventh Air Force. Deployed to Midway Island after the Battle of Midway as a defensive squadron, providing air defense of the island. Reassigned back to Hawaii at the beginning of 1943, remained part of the Territory's air defense forces.

Received P-47D Thunderbolts in late 1943; deployed to Saipan in the Northern Mariana Islands. During the Marianas Campaign, worked closely with Marine ground forces, pioneered close infantry support and employed the first use of napalm. On Saipan the squadron was attacked by Japanese ground forces in June 1944 on Aslito Airfield soon renamed Isley Field, Saipan, sustaining modest casualties. Pilots and ground personnel took a crash course in infantry tactics afterward. Received the new long range P-47Ns in early 1945, before moving next door to Okinawa on Ie Shima.

With the P-47N the squadron pioneered Very Long Range (VLR) fighter operations across the Pacific with missions of historic length and duration: Kauai to Midway Atoll, Midway to Kaneohe and Makin to Jaluit and Maloelap. By 1945, with the long range P-47Ns, VLR sorties were the rule rather than the exception. In April 1945 the squadron began flying 1300 mile escorts and sweeps from Iwo Jima to Honshu. In May 1945 the 73d advanced to le Shima where they reached out to Japanese targets in Kyu-shu and China.

During the summer of 1945 was reassigned to the Twentieth Air Force and continued its fighter sweeps against Japanese airfields and other targets, in addition to flying long-range B-29 escort missions to Japanese cities, until the end of the war. Assigned to Eighth Air Force on Okinawa in August 1945, shortly after V-J Day. Returned to the United States and inactivated in Jan 1946.

Activated in the postwar air force reserve, but never manned or equipped. Inactivated due to budget shortages in 1949.

Was inactivated in 1963 when SAC inactivated its provisional Strategic Wings, redesignating them permanent Air Force Wings. Squadron was inactivated with aircraft/personnel/equipment being redesignated 51st Bombardment Squadron in an in-place, name-only transfer.