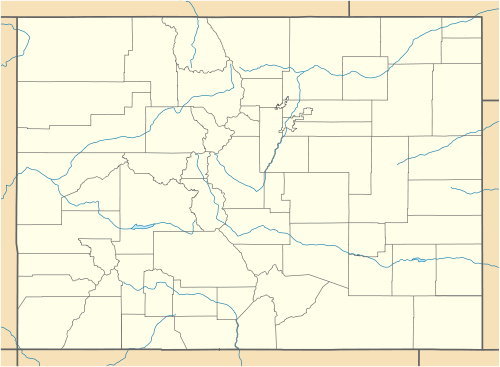 The City of Denver, Aurora, and Highland was chartered as the 1859 territorial capital after the start of the 1858 Pikes Peak Gold Rush; and the 1887 Fort Logan was established in the modern Denver Metropolitan Area. East of the state capital, military training at Montclair, Colorado, began at the future airfield when the 1887 Jarvis Hall Military School opened. Montclair was incorporated into Denver in 1903 and Jarvis Hall burned down in 1904. At the military school site the Agnes Phipps Memorial Sanatorium[5] was established as a tuberculosis hospital in 1904 at 520 Rampart Way[5] (cf. "East 6th Avenue and Quebec Street") by Lawrence C. Phipps, Sr., and in the 1930s the sanatorium included 17 buildings designed by the Gove and Walsh firm.[6]

"After several fires at Chanute Field and deterioration of the buildings" in Illinois,[7] a 1934 Air Corps announcement solicited a replacement training location and Denver submitted a bid.[6] The City of Denver purchased the sanatorium for an airfield after a 1935 municipal bond vote.[6] On 27 August 1937, the Denver Branch, Air Corps Technical School, was formed with Departments of Photography and Armament ("photography training moved from Chanute Field"),[8] and the WPA converted the sanatorium grounds into a Colorado military airfield.[6] In February 1938 the airfield being installed adjacent to Fairmont Cemetery was assigned to the Air Corps Technical School headquartered at Chanute, and "the Denver branch of the Army Air Corps became an Army post of 880 acres."[9]

Lowry training for Boeing B-29 Superfortress pilot qualification and for B-29 operational crew readiness began in 1943, and the base had a July 1943–Jan 1944 clerical school. In 1944 expansion of Lowry's airfield was planned[18] and Lowry gained B-29 Flight Engineer training.

Lowry transferred under Technical Training Command in mid-October 1945 (Air Training Command on 1 July 1946) and by the end of 1945, Lowry's separation center was processing an average of 300 discharges a day. The nearby bombing range was transferred from Buckley Field, by authority of Technical Division, Air Training Command, to Lowry A.F.B. on 20 September 1946.[19] In July 1947, formal courses in Intelligence Training were established at Lowry for combat reporting, photographic intelligence, prisoner of war interrogation, and briefing and interrogation of combat crews.

Lowry Air Force Base was designated on 24 June 1948 and on 26 August 1948 established all Lowry training organizations under the 3415th Technical Training Wing (redesignated "Lowry Technical Training Center" on 1 Jan 1959). Lowry provided Operation Hayride emergency response for people and livestock threatened by eighteen December 1948-January 1949 snowstorms from Utah to Kansas (e.g., a C-47 of the 2151st Air Rescue Unit delivered 115 blankets and 30 cases of C rations on 4 January to 482 people at Rockport, Colorado.) [20] By 25 August 1949, the 3903rd Radar Bomb Scoring Squadron had a unit based at Lowry which operated a Strategic Air Command radar station[21] (Lowry's radar annex was at Genesee Mountain Park.)

In 1951, plans called for the headquarters of Technical Training Air Force to be at Lowry[8] and after expansion at the beginning of the Korean War, Lowry courses included photography, armament, rocket propulsion, electronics, radar-operated fire-control systems, computer specialties, gun and rocket sights, and electronically operated turret systems. The 3415th Wing formed a Guided Missiles Department on 7 June 1951 and from 1952 – 1955, Lowry functioned as President Dwight D. Eisenhower's Summer White House. Beginning in September 1954, the 3415th TTW moved intelligence, comptroller, and transportation training programs to Sheppard AFB. On 11 July 1955, the first class of 306 USAF Academy cadets was sworn in at Lowry.

In 1956 Lowry's bombing range support ended when the bombing range mission was terminated[22] and Lowry's first general courses for missiles were developed.[8] Courses were for Falcon, Rascal, Snark, and Navaho missiles and in 1958, Nuclear Weapons Training. Also early in 1958, the USAF concluded that the new NORAD headquarters (different from the planned Cheyenne Mountain nuclear bunkers for NORAD and the Denver ADS) should be relocated from Ent AFB to Lowry AFB (CO Springs' Chidlaw Building became the new NORAD HQ).[23] In 1960, Lowry was the 3rd ranked technical training base of ATC.[7]

The Air Force Ballistic Committee formed in 1955[24] approved the former bombing range on 13 March 1958 for the first Titan I ICBM launch complex (the Titan missile plant was built at Waterton Canyon.) The 703d Strategic Missile Wing was activated on 25 Sep 1958 and redesignated the 451 SMW on 1 Jul 1961, at the same time the 848th and the 849 SMS were redesignated the 724th and 725 SMS. Construction on all nine silos at the three launch complexes for the 724 was completed by 4 August 1961. On 18 April 1962, Headquarters SAC declared the 724th SMS operational, and 2 days later the first Titan Is went on alert status. A month later, the sister 725th SMS (initially designated the 849th SMS) declared it had placed all nine of its Titan Is on alert status, which marked a SAC first. Both the 724th and 725th Strategic Missile Squadrons formed components of the Lowry-headquartered 451st Strategic Missile Wing.[25] The "original class of instructors" for the Mace missile course at Lowry graduated from the "G.L. Martin factory training course in Baltimore MD in 1960"[26] and by early 1961, Lowry's personnel course moved to Greenville AFB.[7]

By 1962, Lowry's Department of Missile Training was graduating over 1,000 trained missile specialists per year, and the "Tactical Missile School at Lowry" (e.g., for Matador missile training) in January 1962 "was located in the Black Hangar."[27] On 25 June 1965, the 724th and 725th Strategic Missile Squadrons were inactivated,[28] and the last missile supported by Lowry was removed on 14 April 1965.[29]

Not to be confused with Air Technical Intelligence Center.

The Armed Forces Air Intelligence Training Center was established at Lowry effective 1 July 1963 with student training beginning on 17 July (by 14 March, "the Defense Department had assigned responsibility for all DOD air intelligence training and advanced training in photographic, radar, and infrared interpretation to the Air Force.")[8] In 1965, the runway was closed, and all Lowry AFB flying activities moved to nearby Buckley Air National Guard Base. Ten courses from Amarillo AFB were planned to be moved to Lowry in mid-1968,[8]:159 and Amarillo's 3320th Retraining Group for convicted airmen moved to Lowry 1 July-1 September 1967. In 1974, the Air Staff approved Lackland AFB's Special Treatment Center to transfer to the 3415th Special Training Group at Lowry AFB. In addition to Air Force personnel, the U.S. Navy also sent junior officers (ensigns and lieutenants) for initial intelligence training at Lowry, along with enlisted personnel newly graduated from boot camp for their "A" school instruction as intelligence specialists.

The AFAITC school remained at Lowry from 1963 to 1988, before moving to Goodfellow AFB, in San Angelo, Texas. US Navy intelligence training for both junior officers and enlisted personnel was shifted to the new Navy Marine Corps Intelligence Training Center (NMITC) at Dam Neck, in Virginia Beach, Virginia.

In 1972, the 3415th Technical Wing became the USAF School of Applied Aerospace Sciences, Lowry. The Department of Aerospace Munitions Training continued missile training and in 1978 was redesignated the 3460th Training Group. In 1980 Lowry acquired a Davis-Monthan AFB B-52D and stabilized another B-52 for training ALCM and SRAM loading procedures. New courses in the 1980s included flight line and in-shop avionics maintenance courses for the F-4 Phantom II, F-111 Aardvark, A-10 Warthog, F-15 Eagle and F-16 Fighting Falcon (e.g., communications, flight controls, navigation, weapons guidance, and electronic countermeasures & warfare systems). In 1982, Lowry's 1941 Eisenhower Memorial Chapel (cf. the Eisenhower Chapel at Fort Knox[30]) was listed in the National Register of Historic Places. The National Geospatial Agency's Integrated Operations Center was in Denver and by 1983, Lowry had the Air Intelligence Officer Course[31]

LGM-118 Peacekeeper ICBM training began at Lowry in 1985, and after Lowry became the primary training center for USAF space operations, Undergraduate Space Training's 1st graduation was in 1987. Lowry also handled ground & armament training for several interceptor models, the A-10 Thunderbolt II, and the B-1 Lancer. After being considered for closure in 1978 and since "Lowry lacked a runway"[7] (closed July 1966),[10] Lowry AFB was designated for closure by BRAC 1991. The 3400th Technical Training Wing inactivated on 27 April 1994, and the base officially closed on 30 September 1994. The National Civilian Community Corps used Lowry facilities from 1994 until 2004; and Space Systems Support Group Detachment 1 "located at the former Lowry AFB" in March 1995 moved to Peterson AFB.[32] The Bonfils Blood Center "became the first commercial tenant at Lowry" in the former commissary during September 1995, and the site development company was presented facility and real estate awards in 1997[33] (asbestos was remediated from the Formerly Used Defense Site[34] of "1,866 acres"—remediation at buildings included Building 402:PCBs, 606: groundwater, & 1432: soil[2]).

The Buckley Annex was the remaining military installation after the "Whole Base Transfer" of Lowry AFB in 2006,[35] the year the USGS listed the closed Lowry AFB in the Geographic Names Information System.[1] In 2007, the annex of 70 acres (28 ha) with DFAS & ARPC[36] was planned for closure.[33] The last remaining Air Force facility at Lowry was the Air Reserve Personnel Center,[37] which BRAC 2005[2] moved to Buckley AFB in August 2011. The Buckley Annex' Whole Base Transfer was in 2012, and the "final stages of cleanup" of the base and annex were underway in February 2013.[35]

Most of the base is now the Lowry, Denver, neighborhood with 2 hangars used for the Wings Over the Rockies Air and Space Museum, the former Building 1499 for the Big Bear Ice Rink, a dormitory for the Logan School for Creative Learning,[38] and base housing for the Stanley British Primary School.[39] A dormitory and a former medical building on the east end of the base are owned by the state as part of the Higher Education and Technology campus. The last remaining military facility at the former Lowry base was the Defense Finance and Accounting Service Finance Center (6760 E Irvington Place), which had its own USAF Base Facility identifier in 2004 (08002D).[3] The Lowry Community Master Association (LCMA) is located at 7581 E Academy Blvd,[40] the former hangar with the name "Lowry Air Force Base" and which also has suites for Martifer Solar USA, Mor Beverage Corp, Montessori Casa International, and Extra Space Storage.[41]