Kadena Air Base (嘉手納飛行場, Kadena Hikōjō), (IATA: DNA, ICAO: RODN) is a United States Air Force base in the towns of Kadena and Chatan and the city of Okinawa, in Okinawa Prefecture, Japan. Kadena Air Base is home to the USAF's 18th Wing, the 353d Special Operations Group, reconnaissance units, 1st Battalion, 1st Air Defense Artillery, and a variety of associated units. Over 20,000 American servicemembers, family members, and Japanese employees live or work aboard Kadena Air Base.[1] 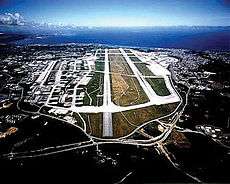 Kadena Air Base's history dates back to just before the 1 April 1945, Battle of Okinawa, when a local construction firm completed a small airfield named Yara Hikojo near the island's village of Kadena. The airfield, used by Imperial Japanese warplanes, was one of the first targets of the Tenth United States Army 7th Infantry Division. The United States seized it from the Japanese.

View of Kadena Air Base

What the Americans captured was a 4,600 feet (1,400 m) strip of badly-damaged coral runway. Army engineers from the 13th Combat Engineer Battalion, 7th U.S. Infantry Division quickly made repairs and, by nightfall the same day, the runway could accept emergency landings. Eight days later, and after some 6 inches (150 mm) of coral were added, the airfield was declared operational and put into immediate service by artillery spotting aircraft when the runway became serviceable on 6 April. Additional construction was performed by the 807th Engineering Aviation Battalion to improve the airfield for USAAF fighter and bomber use with fuel tank farms, a new 6,500 feet (2,000 m) bituminous runway, and a 7,500 feet (2,300 m) runway for bomber aircraft by August.

Kadena airfield was initially under the control of Seventh Air Force, however on 16 July 1945, Headquarters Eighth Air Force was transferred, without personnel, equipment, or combat elements to the town of Sakugawa, near Kadena from RAF High Wycombe England. Upon reassignment, its headquarters element absorbed the command staff of the inactivated XX Bomber Command. Kadena was used by the headquarters staff for administrative flying requirements.

Upon its reassignment to the Pacific Theater, Eighth Air Force was assigned to the U.S. Army Strategic Air Forces with a mission to train new B-29 Superfortress bomber groups arriving from the United States for combat missions against Japan. In the planned invasion of Japan, the mission of Eighth Air Force would be to conduct strategic bombing raids from Okinawa. However, the atomic bombings of Japan led to the Japanese surrender before Eighth Air Force saw action in the Pacific theater.

The surrender of Japanese forces in the Ryukyu Islands came on 7 September. General Joseph Stilwell accepted the surrender in an area that would later become Kadena's Stearley Heights housing area.

On 7 June 1946, Headquarters Eighth Air Force moved without personnel or equipment to MacDill AAF, Florida. It was replaced by the 1st Air Division which directed fighter reconnaissance, and bomber organizations and provided air defense for the Ryukyu Islands until December 1948.

Twentieth Air Force became the command and control organization for Kadena on 16 May 1949.

Postwar years and the Korean War

At the end of the Eisenhower presidency, around 1,700 nuclear weapons were deployed on shore in the Pacific, 800 of which were at Kadena Air Base.[5]

Since November 1954, the 18th Wing under various designations has been the main United States Air Force operational unit at Kadena. Over the past 50 years, the 18th has maintained assigned aircraft, crews, and supporting personnel in a high state of readiness for tactical air requirements of Fifth Air Force and the Pacific Air Forces.

The 18th Fighter-Bomber Wing was reassigned to Kadena from Osan-ni AB (K-55), South Korea on 1 November 1954, flying three squadrons (12th, 44th and 67th Fighter Squadrons) of North American F-86 Sabres. Initially the wing supported tactical fighter operations in Okinawa, as well as in South Korea, Japan, Formosa, and the Philippines with frequent deployments. In 1957, the wing upgraded to the North American Aviation F-100 Super Sabre and the designation was changed to the 18th Tactical Fighter Wing. In 1960, a tactical reconnaissance mission was added to the wing with the arrival of the McDonnell RF-101 Voodoo and the 15th Tactical Reconnaissance Squadron.

On 30 June 1959 an F-100 from the wing crashed on Okinawa during a training flight after suffering an engine fire. The pilot successfully ejected and suffered no harm, but the aircraft crashed into a local elementary school, killing 11 students plus six residents of the nearby neighborhood.[6]

Beginning in 1961, the 18th was sending its tactical squadrons frequently to South Vietnam and Thailand, initially with its RF-101 reconnaissance forces, and beginning in 1964 with its tactical fighter forces supporting USAF combat missions in the Vietnam War. In 1963, the Republic F-105 Thunderchief replaced the Super Sabres. During the TDY deployments to Southeast Asia, the 12th TFS lost four aircraft, the 44th TFS lost one F-105D, and the 67th TFS lost nine aircraft, including three on the first day of the Rolling Thunder operations. Aircraft markings on natural metal/silver F-105D/F aircraft included a PACAF badge on both sides of the vertical fin, and a coloured band around the nose directly behind the radome. The deployments to Southeast Asia continued until the end of United States involvement in the conflict.

The McDonnell Douglas RF-4C Phantom II replaced the RF-101 in the reconnaissance role in 1967. An electronic warfare capability was added to the wing in late 1968 with the attachment of the 19th Tactical Electronic Warfare Squadron from Shaw AFB South Carolina flying the Douglas EB-66 Destroyer. The B-66s remained until 1970, flying daily over the skies of Southeast Asia.

During the 1968 Pueblo crisis, the 18th deployed between January and June to Osan Air Base, South Korea following the North Korean seizure of the vessel. Frequent deployments to South Korea have been performed ever since to maintain the air defense alert mission there. The McDonnell Douglas F/RF-4C Phantom II replaced the F-105s in 1971, and a further upgrade to the McDonnell Douglas F-15 Eagle was made in 1979.

In 1972, the 1st Special Operations Squadron was assigned, bringing their specialized Lockheed C/MC-130 Hercules aircraft to the wing. The squadron was reassigned in 1978. The reconnaissance mission ended in 1989 with the retirement of the RF-4Cs, and the inactivation of the 15th TRS.

The designation of the wing changed on 1 October 1991 to the 18th Wing with the implementation of the Objective Wing concept. With the objective wing, the mission of the 18th expanded to the Composite Air Wing concept of multiple different wing missions with different aircraft. The mission of the 18th was expanded to include aerial refueling with Boeing KC-135 Stratotanker tanker aircraft; and surveillance, warning, command and control Boeing E-3 Sentry, and communications. Added airlift mission in June 1992 with the Beech C-12 Huron, transporting mission critical personnel, high-priority cargo and distinguished visitors. In February 1993, the 18th Wing gained responsibility for coordinating rescue operations in the Western Pacific and Indian Ocean.

In November 2006, the U.S. Army's 1-1 ADA Battalion, a Patriot PAC-III unit, deployed to Kadena from Fort Bliss Texas.[7] They are assigned to the 94th AAMDC, USPACOM, they were assigned to 31st ADA Brigade at Fort Bliss. The move was part of the BRAC consolidation of U.S. Army bases and security agreements between the U.S. and Japan. The battalion's mission is to defend the base against tactical ballistic missiles from North Korea. The deployment was controversial in Okinawa. The unit was greeted by protests.[8]

Other major units assigned to Kadena since 1954 have been:

The 18th Wing is the host unit at Kadena AB. In addition, the base hosts associate units from five other Air Force major commands, the United States Navy, and other Department of Defense agencies and direct reporting units. Associate units operate more than 20 permanently assigned, forward-based or deployed aircraft from the base on a daily basis.

In June 2013, the government of Japan discovered 22 barrels buried on former base property that tests showed had previously contained dioxins and herbicides. Tests on the surrounding soils found dioxin levels at 8.4 times and groundwater at 280 times the legal limit. The land in question is a soccer field bordering the base's Bob Hope Primary School and Amelia Earhart Intermediate School. Angry parents accused base officials, under base commanders Brigadier General Matt H. Molloy[11] and Brigadier General James B. Hecker, of failing to notify them of the toxins near the school and not investigating into the matter. The parents established a Facebook group on 10 January 2014 titled, "Bob Hope/AEIS - Protect Our Kids." After the issue was reported in the Japan Times and Stars and Stripes, USAF officials tested the soil and water at the schools and said that no excessive toxic substances were found.[12][13]

Soil on the base tested positive for very high levels of polychlorinated biphenyl chemicals (PCBs), in the thousands of parts per million, much higher than most other contamination sites in the world, according to a report issued in 1987 after an investigation prompted by a small unrelated spill of transformer oil.[14]